When it comes to retirement savings plans, there are a few different options to choose from.

Two of the most common types of plans are 401(k)s and pension plans. Both of these options have their own set of pros and cons, so it is important to understand the differences between them before making a decision.

401(k)s are defined-contribution plans that are sponsored by employers. Employees can choose to contribute a portion of their salary to the plan, and the employer may also make matching contributions.

Pension plans are defined-benefit plans that are also sponsored by employers. Employees do not contribute to these types of plans. Instead, the employer makes contributions and invests the money.

When employees retire, they receive a fixed income from the pension plan.

A 401(k) is an employer-sponsored plan to which employees can contribute a certain amount from their salary, while employers may match their contributions.

The employee has the option to contribute a portion of his annual salary to a 401(k) account provided it does not go beyond the contribution limits.

401(k) plans have myriad benefits within the retirement savings realm. Some advantages of 401(k) plans include:

Tax-deferred means that the investment earnings are accumulated tax-free until the taxpayer can take constructive receipt of the gains.

Contributions to traditional 401(k) are taken directly from the employee's paycheck before income taxes are withheld. This is a benefit to the employee because they will owe less in income taxes now.

The account’s dividends and capital gains also grow tax-deferred until the employee chooses to withdraw them in retirement.

Employee Has Control in Fund Management

Employees are usually responsible for choosing from the investment options offered in the 401(k) plan of their company. These typically include mutual funds and ETFs. Index funds are also a great option for those who do not enjoy the gamble of actively investing.

Should they wish to, employees have the choice to pay for account management especially if they have little knowledge about investments.

Employer matching means that an employer makes contributions to a 401(k) for a certain amount based on the employee’s contribution.

The employer may match based on a specific percentage of the contribution up to a portion of the employee’s salary or an employer can also contribute a dollar-for-dollar amount.

A 401(k) matching program is basically free money for employees.

In cases where the employee decides to change jobs, the money contributed to his 401(k), and its earnings belong to the employee.

There are different ways to keep the retirement plan invested and growing on a tax-deferred basis depending on the employee's 401(k) plan type.

Suppose an employee leaves his employer but still has an old 401(k) with them. In that case, the employee may look for available options to remain in the plan or move it elsewhere like an IRA or another employer's qualified retirement plan.

Disadvantages of a 401(k) Plan

The 401(k) account is subject to the volatility of the stock market and other investment risks. The value of 401(k)s can go up or down, and it is possible to lose money in a 401(k).

Additionally, employees may end up paying fees for the investments and management of their 401(k) accounts. These fees can take a large bite out of investment returns over time and reduce the overall balance of the account.

401(k)s do not offer guaranteed payout amounts in retirement as pensions do. The eventual size of the 401(k) account will depend on how much the employee contributes, how well the investments perform, and whether there are any fees charged.

What Is a Pension Plan?

A pension plan is a retirement plan that is known as a defined-benefit plan where employers, not employees, commit to paying a defined benefit to employees for life after they retire, typically according to how long they worked for the company.

Pension plans are expected to pay the retiree a set amount of income, regardless of the performance of the investment portfolio.

The employee often has the choice of taking either a lump sum on retirement or regular payments for life through an annuity. It can also be that those pension benefits may be inheritable by a surviving spouse or children, depending on the plan.

Advantages of a Pension Plan

Pensions offer some advantages that 401(k)s and other retirement savings plans do not. Some benefits of pensions include:

There are laws that protect the employees’ pension plans in certain situations such as when their employers go bankrupt, when pension plans are underfunded, and when the pension falls into a loophole.

In these situations, the Employee Retirement Income Security Act of 1974 (ERISA) has laws that protect the workers and retirees in traditional defined-benefit pension plans.

The PBGC steps in if the employer terminates its pension plan because of bankruptcy. PBGC will pay employees up to the guaranteed maximum amount of any pension benefits employees have been promised that the employer cannot make good on.

Death Benefit Can Be Passed On to Beneficiaries

One can receive pension plan benefits depending on the plan options and the beneficiary's relationship with the pension owner.

Generally, pension plans permit only one member- or their surviving spouse- to receive benefit payments. However, there are some instances that some may allow for a non-spouse beneficiary, such as a child.

Per the IRS, the Employee Retirement Income Security Act of 1974 (ERISA) "protects surviving spouses of deceased participants who had earned a vested pension benefit before their death."

Disadvantages of a Pension Plan

Pensions also have some disadvantages. These include:

An employee's pension is locked up with the employer until retirement day. That means if you have an emergency situation and need a large amount of money to take care of it, the pension will not help.

Generally, when an employee changes jobs, he will not be able to bring the funds from the pension plan. However, some employers offer vesting to their employees.

Vesting in a pension plan means ownership, which means that the employee will vest, or own, a specific percentage of their account in the plan each year.

When the employee is 100% vested in his pension account, this means he owns 100% of it and the employer cannot take it back, or forfeit, for any reason.

Employees Have No Control in Fund Management

Pension plans are managed by the employer or an appointed professional fund manager. Unlike defined contribution plans, employees have no say in how the fund is being managed and where the money is being invested in a pension plan. 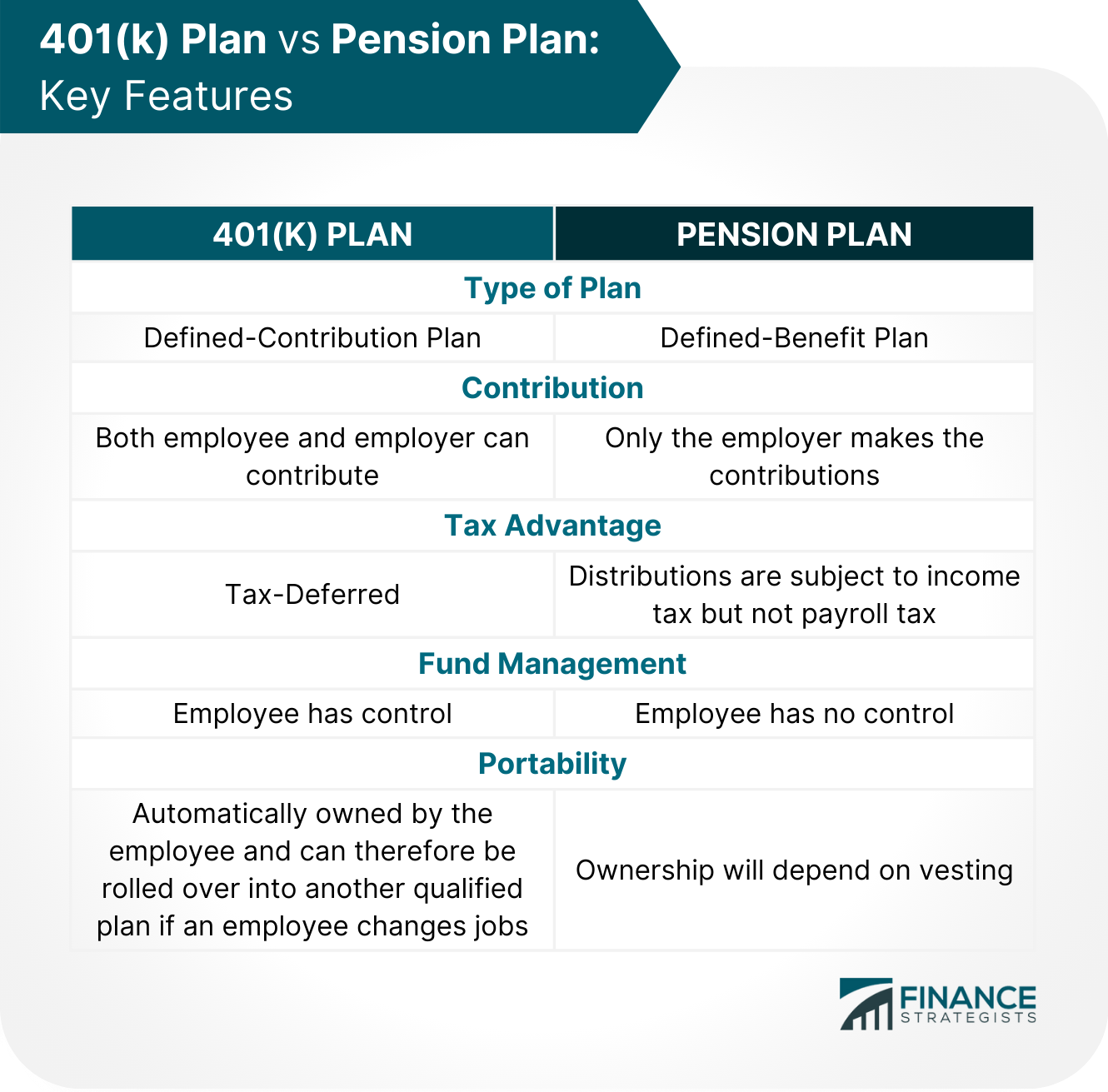 There are a number of similarities and differences between a 401(k) plan and a pension plan. Here are some of them:

On the other hand, distribution of pension benefits that are received at retirement or earlier are taxed under the state and federal income tax rates, but are not subject to the Social Security payroll tax. 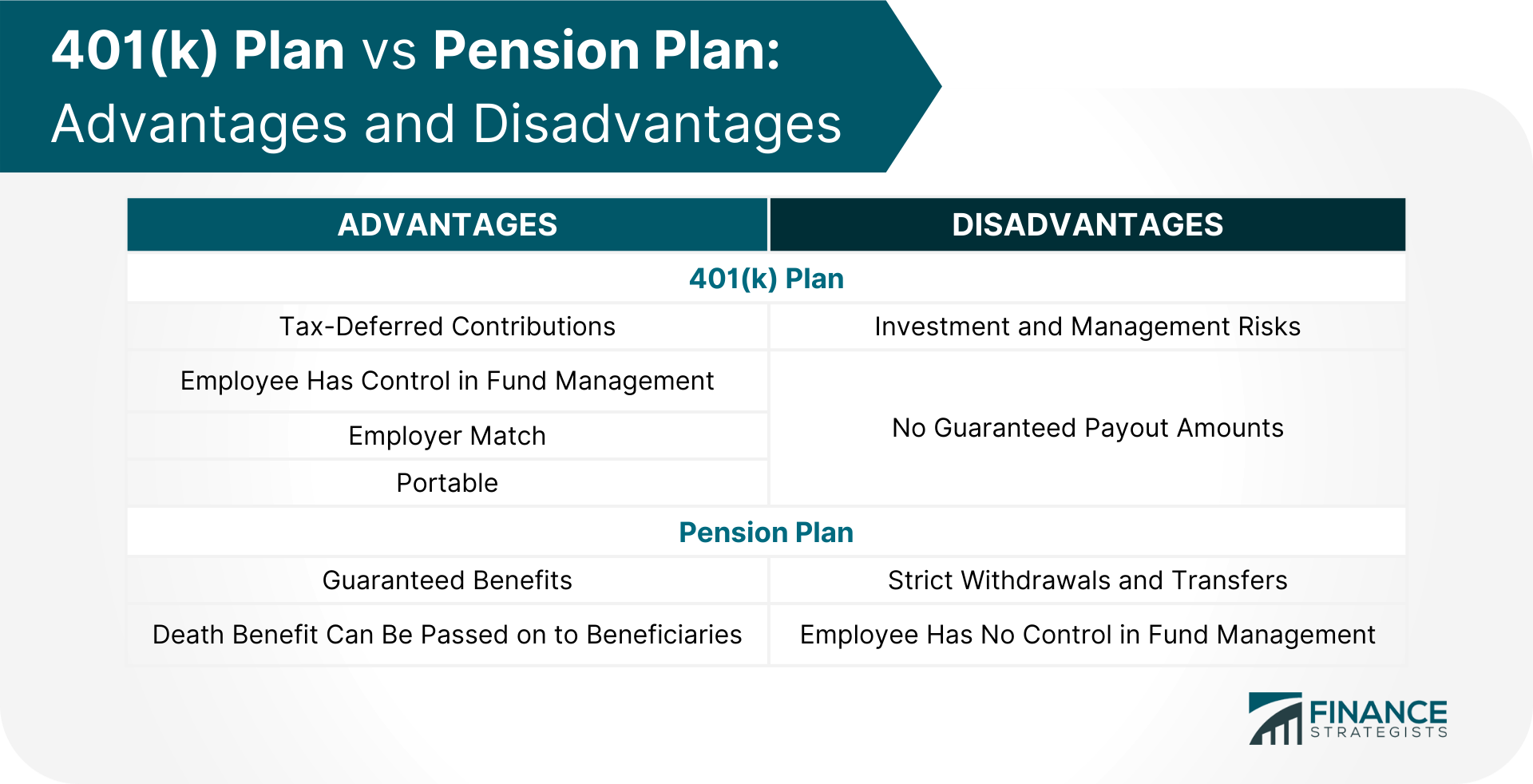 According to the Bureau of Labor Statistics, pensions remain common in the public sector. However, they have largely been replaced by defined contribution plans that are less costly to employers in the private sector.

The best retirement savings plan for you depends on your situation. If you want more control over how your money is invested and the ability to take it with you if you leave your job, a 401(k) plan might be the better option.

If you like the idea of a guaranteed income in retirement and do not mind not having access to the money until you retire, a pension plan could be the better option.

There are also other factors to consider when making your decision, such as whether your employer offers a match.

If you have the option of both a 401(k) and pension plan, you might want to contribute to both. This can give you more financial stability in your retirement and provide a safety net in case one of the plans does not perform as well as you hoped.

There are different options available when it comes to retirement savings plans. Two of the most common are 401(k) plans and pension plans. Both of these plans have their own pros and cons, as well as similarities and differences.

The best retirement savings plan for you will depend on your individual situation and what is important to you.

If you have the option of both, contributing to both could give you the best chance at a comfortable retirement.

Contact a financial advisor to get help figuring out which retirement savings plan is best for you and how to make the most of the one you choose.

Yes, you can have both a pension plan and a 401(k) plan. However, you usually only have one active through your present employer, so it is most often the case to have a pension plan you have vested for through a previous employer. In this case, you can pay contributions to your 401(k), and your pension plan benefits when you retire have already been established.

Do 401(k) plans allow borrowing of funds from the account?

Yes. If you decide to borrow from your 401(k), you need to sign a loan agreement that spells out the principal, loan terms, interest rate, any fees, and other applicable terms. You may have to wait for loan approval, though in some instances, you will qualify since you are borrowing your own money.

Do pension plans allow borrowing of funds from the account?

Yes, however, there are alternatives to borrowing against your pension. You can ask your credit or bank union if you are qualified for a short-term loan or ask your credit card company if you can make a cash advance.

What happens to a person's 401(k) account when they leave their job?

After leaving the job, a person has several options for his 401(k). He may decide to leave the account where it is. Alternatively, he may roll over the funds from the old 401(k) into either an IRA or his new employer's plan.

Can pension payments be taken as a lump sum?

Yes. You can elect to take your pension as a lump-sum payment, which is the total value of your account paid out all at once. If you choose this option, you will likely pay taxes on the lump sum in the year you receive it.