What Is the Federal Deposit Insurance Corporation (FDIC)?

The Federal Deposit Insurance Corporation (FDIC) is a U.S. government agency that protects deposits in banks and other financial institutions. It strives to maintain confidence in the banking system by ensuring that depositors receive their money in case of bank failure.

As long as the institution is a member firm, the FDIC covers deposits up to $250,000 per depositor, per insured bank, for each account ownership category.

It covers most deposit accounts, including checking and savings accounts, money market accounts, and certificates of deposit (CDs). It neither covers investments nor insures against market losses.

The FDIC is funded by premiums paid by banks and other financial institutions. It also collects fees from banks for regular financial examinations. Even though a government agency, it does not use appropriated funds from the U.S. Congress.

History of the FDIC

The FDIC was created during the Great Depression to restore public confidence in banks after a wave of bank failures that began in late 1929 and continued into 1933.

The Stock Market Crash of 1929

Wall Street speculators traded 16 million shares on the New York Stock Exchange in a single day, resulting in the 1929 Stock Market Crash. Thousands of investors were wiped out as billions of dollars were lost.

Following that catastrophe, America and the rest of the industrialized world plunged into the Great Depression.

By 1933, when the Great Depression had reached its apex, 15 million Americans were out of work, and nearly half of the country's banks had failed.

Suspension of the Gold Standard

The U.S. exited the gold standard, a monetary system in which currency is backed by gold, on June 5, 1933. The U.S. had been on a gold standard since 1879, except for a gold export prohibition during World War I.

Bank failures during the 1930s terrified the people into hoarding gold, rendering the policy unsustainable.

The FDIC was essentially a safety net for customers; if their bank failed, they would be covered up to $2,500 of their money. This was raised to $5,000 half a year later. The law also provided for federal supervision of state-chartered banks and set regulations for national banks.

Dodd-Frank increased the FDIC deposit insurance cap to $250,000 per account in perpetuity. The Act also broadened the FDIC's mandate to include regular risk evaluations of all FDIC-insured institutions.

Today, it does not only insure deposits but also supervises banks, examines financial institutions for consumer protection, and takes measures to protect the U.S. financial system against potential threats.

The Federal Deposit Insurance Reform Act (FDIRA) was passed by Congress in 2006 and signed into law by President George W. Bush. The act established a framework for protecting deposits in case of bank insolvency and rules for how banks must manage certain risks.

The Deposit Insurance Fund (DIF) has two primary goals: (1) to insure deposits and safeguard depositors of insured banks and (2) to resolve bankrupt institutions.

While the DIF is backed by the US government's complete confidence and credit, it is funded from two sources: assessments (insurance premiums) on FDIC-insured banks and interest collected on assets invested in U.S. government obligations.

Below are some of the items insured and not insured by the FDIC. 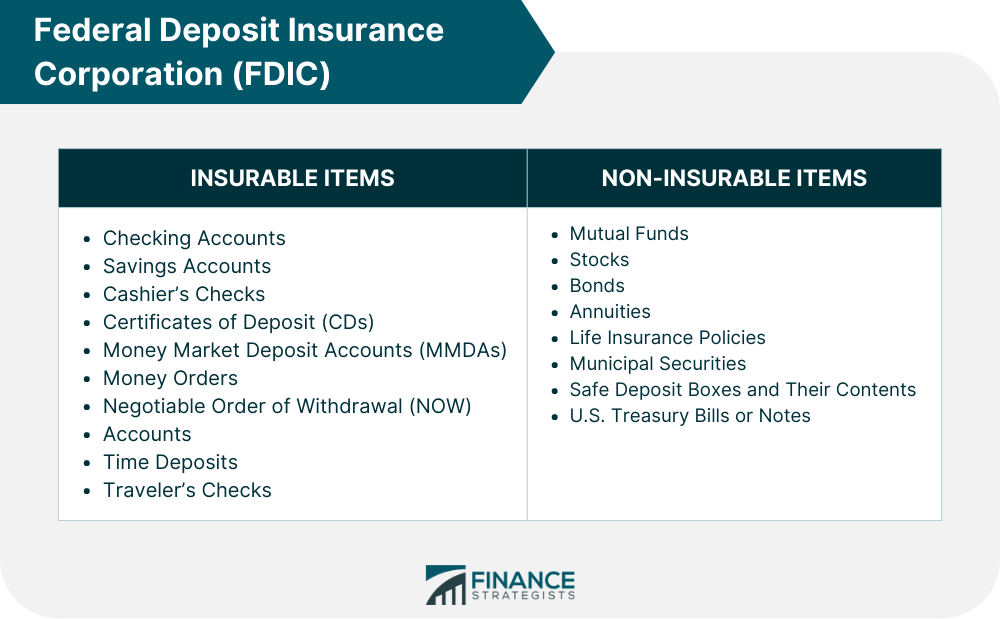 What Happens When a Bank Fails?

A bank failure is when a financial institution cannot meet its obligations to its creditors and depositors. The FDIC then appoints a receiver to administer the failed institution until all deposits and accounts are paid out.

The FDIC often sells off some of the bank’s assets in order to make up for any losses incurred by customers whose deposits were not insured. The FDIC also works with other state or federal agencies to ensure that the troubled bank is shut down and liquidated.

The FDIC then pays depositors up to $250,000. The fund is taken from premiums paid by insured banks and any earnings made on investments with the DIF. The FDIC may even borrow money from the Treasury Department to ensure that all depositors are paid out.

Depositors are notified through mail when the FDIC has taken over a bank, informing them of how and when they can access their funds. News media and the FDIC website also help to spread information about a failed bank. Notices are also posted at the bank itself.

How FDIC Takes Care of Bank Insolvency and Bank Assets

A bank’s chartering authority closes the bank and brings in the FDIC as the insurer. Below are the two main ways that the FDIC resolves bank insolvency.

This method is the most commonly used approach to resolving bank insolvency. The FDIC steps in and arranges another financial institution or multiple other institutions to take on the failed bank's liabilities and buy certain of its assets.

This method provides customers with a rapid transition process to access their deposits without disruption.

Suppose the P&A method is not feasible or costs more than paying out depositors individually. In that case, the FDIC may use the payout method instead. In this case, all of the deposits at a failed bank are paid out to its creditors through a third-party financial institution.

This process can take days to weeks, depending on how many customers have deposits with the failed bank and how much each customer has on deposit. The FDIC then liquidates the failed bank's assets to recuperate payout costs.

How to Calculate FDIC Coverage

FDIC coverage can be calculated based on a customer’s total deposits and deposit types. FDIC coverage is generally up to $250,000 per customer per insured bank. This includes both principal and interest that have been earned on the customer’s account balance.

However, this amount may vary depending on the specific type of deposit the customer makes. For example, deposits in different ownership categories are insured separately according to the FDIC rules for calculating insurance limits.

For individual accounts held in only one name (the most common form of deposit), up to $250,000 is protected against loss or theft. Joint accounts with two names listed as owners are protected for up to $500,000 ($250,000 per account holder).

You can use the FDIC Electronic Deposit Insurance Estimator (EDIE) tool to estimate your coverage of each deposit account under one FDIC-insured bank at a time.

The Importance of FDIC

The FDIC protects consumers’ deposits and savings. The U.S. government established it to ensure people’s money is safe and secure when deposited into banks, credit unions, and other financial institutions.

FDIC insurance protects customers from bank failures and insolvency, guaranteeing their funds are secure even if the institution fails or goes bankrupt. It also helps preserve customer confidence in the banking system during economic distress or instability.

It also helps maintain the banking system’s stability by providing financial assistance and oversight to banks that might otherwise become insolvent due to mismanagement or other factors.

The FDIC is an essential part of the U.S. banking system. It helps maintain public confidence in banks even during economic uncertainty. From its inception in 1933, it has assured that deposits are safe even if the institution they have entrusted with them fails.

Today, it guarantees that customer deposits are safe in bank failure or insolvency, protecting up to $250,000 per depositor, per account, at any insured financial institution.

It also supervises the banking system to ensure it is safe and sound, ensures consumer protection laws are implemented, and guards against threats to the financial system.

What is the Federal Deposit Insurance Corporation (FDIC), and why was it created?

The FDIC is an agency of the U.S. government established in 1933 to insure deposits made at financial institutions. It was created as a response to bank failures during the Great Depression and serves to protect depositors from losses due to insolvency or failure of an FDIC-insured bank.

What does the FDIC do?

The FDIC provides deposit insurance to banks, encouraging public confidence in the banking system. As of 2022, it pays a maximum of $250,000 per depositor per bank. In addition, the FDIC also supervises and regulates banks and financial institutions that are members of the Federal Reserve System, such as state-chartered banks or trust companies.

What is covered by the FDIC?

Insurable accounts include savings, checking, money market deposit, and negotiable order of withdrawal. It also covers cashier's and traveler's checks, certificates of deposit, money orders, and other official items issued by banks. It should be noted that investments such as mutual funds, annuities, stocks, bonds, and similar others, are not insured by the FDIC.

What does the FDIC do when a bank fails?

When a bank fails, the FDIC takes care of the insolvency and any remaining assets. It can offer the failed bank for sale to other healthier banks and have them assume the failed bank's responsibilities. If this is not feasible, the FDIC can payout the insurance from the deposit insurance funds. The FDIC insures deposits up to certain limits set by law. The FDIC also manages any remaining assets from failed banks and works to resolve any claims against them.

How did the FDIC help during the Great Depression?

The FDIC restored public trust in the financial system by providing deposit insurance. People were more confident in entrusting their money to banks, knowing that even if banks failed, they could recuperate their money. It helped prevent bank runs.