What Is the Stepped-up Basis?

The stepped-up basis, or step-up in basis, is an adjustment of the value of inherited assets to the current fair market value (FMV) for taxation. It applies to inherited assets such as investments, stocks, bonds, or real estate transferred after the owner’s death.

The Internal Revenue Service (IRS) adjusts the initial cost basis of an investment asset to its current value. Only gains calculated from the date of inheritance are taxed when the heir sells the asset.

In summary, the asset's tax basis steps up to its value on the date of death.

Of course, if the price of the asset declines, a step down of the asset’s cost basis will occur, rather than a step-up. However, since long-term holdings tend to have positive returns over time, most cost basis adjustments after death are steps up, not steps down.

When you inherit an asset, you generally take over the same tax basis as the previous owner. With a stepped-up basis, the tax basis increases to match the asset's fair market value at the time of inheritance.

To illustrate, if you inherit a stock portfolio from your parents that initially cost $500,000, but its current worth is $1 million, your tax basis would increase to $1 million.

The profits made through the sale of an investment, such as stocks, bonds, or real estate, are known as capital gains. 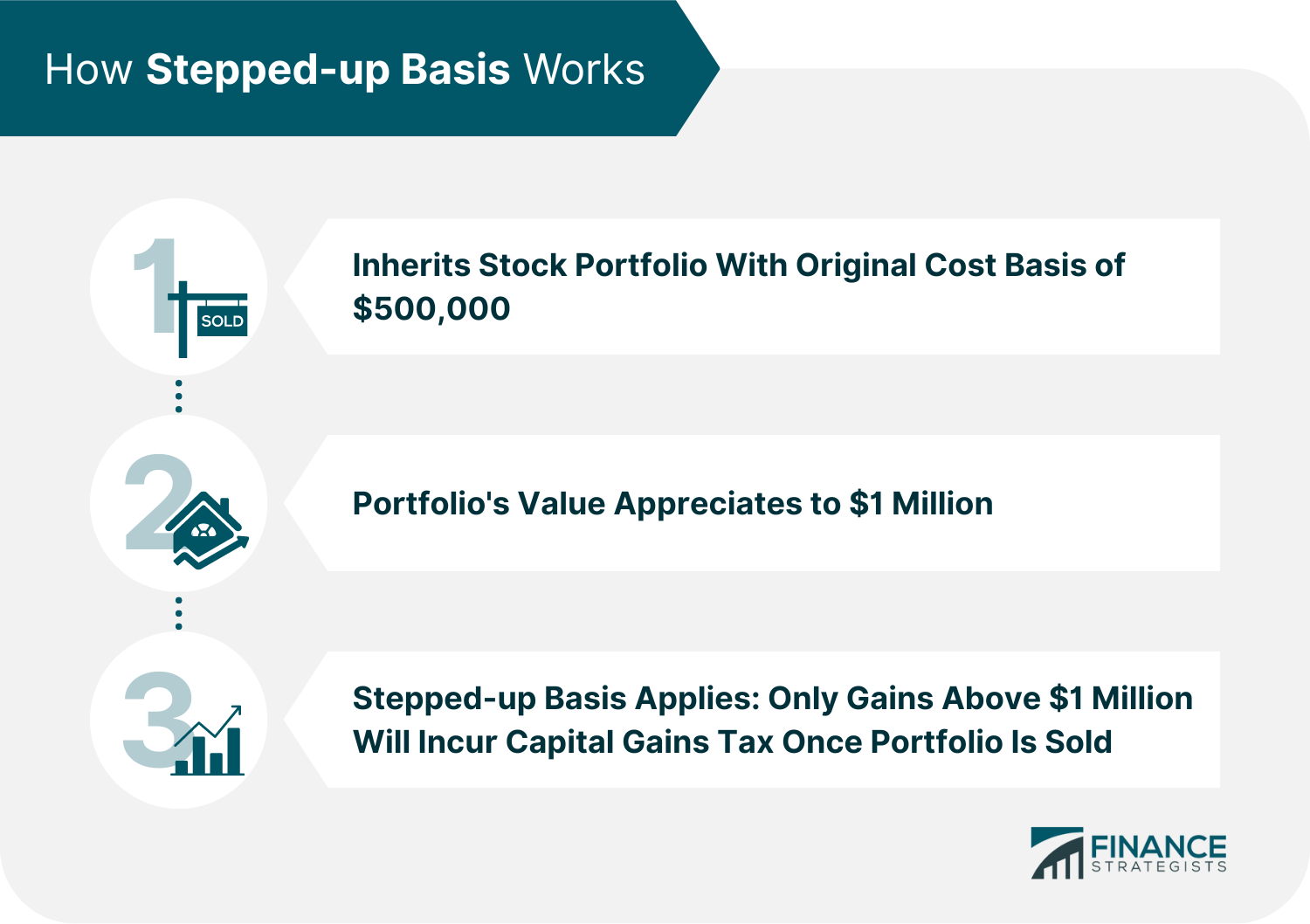 A capital gain arises when you sell an asset for more than you initially paid. It refers to the increase in the value of a capital asset when sold.

Short-term capital gains, which result from investments sold within one year, are taxed as ordinary income.

Long-term capital gains, which result from assets held for more than a year, are taxed at a lower rate.

The table below summarizes the Federal capital gains tax rates for 2022.

Capital gains taxes are based on the difference between the original cost of the asset and its selling price.

A single beneficiary of a stock portfolio with annual taxable income of $50,000 will be subject to 15% tax rate.

As this only covers federal gains tax, you need to factor in state and local capital gains taxes.

In the event of a divorce, the community property law may impose tax liabilities. However, it can provide significant tax benefits to couples who own real estate and remain married in the case of the first spouse's death.

When someone passes away, the person who inherits their assets receives a new tax basis on those assets, equal to their fair market value on the date of death.

When the second spouse of a married couple passes away, there may be a double stepped-up in the tax basis.

Let us take the example of John and Jane, a hypothetically married couple who lives in a community property state. They have 1,000 shares of stock that John has accumulated until his retirement.

The stocks, including all their other assets, were placed in a revocable living trust in 2010. At the time of John's death in 2020, the stock had a value of $100 per share (the first stepped-up value of the asset).

When she passes away in 2022, her son inherits $124 per share of stock. The current value of the assets at the time of her mother's death is the new (second) stepped-up basis.

Stepped-up Basis as a Tax Loophole

The stepped-up basis reduces taxes on investments made using inheritance money. Nevertheless, this strategy has attracted criticism because it has become a loophole for wealthy people.

Under this law, a person can leave his heirs a substantial amount of property without being concerned about paying taxes on the property's appreciation.

Whereas, without the stepped-up basis, he would be responsible for $230,000 subject to capital gains tax. 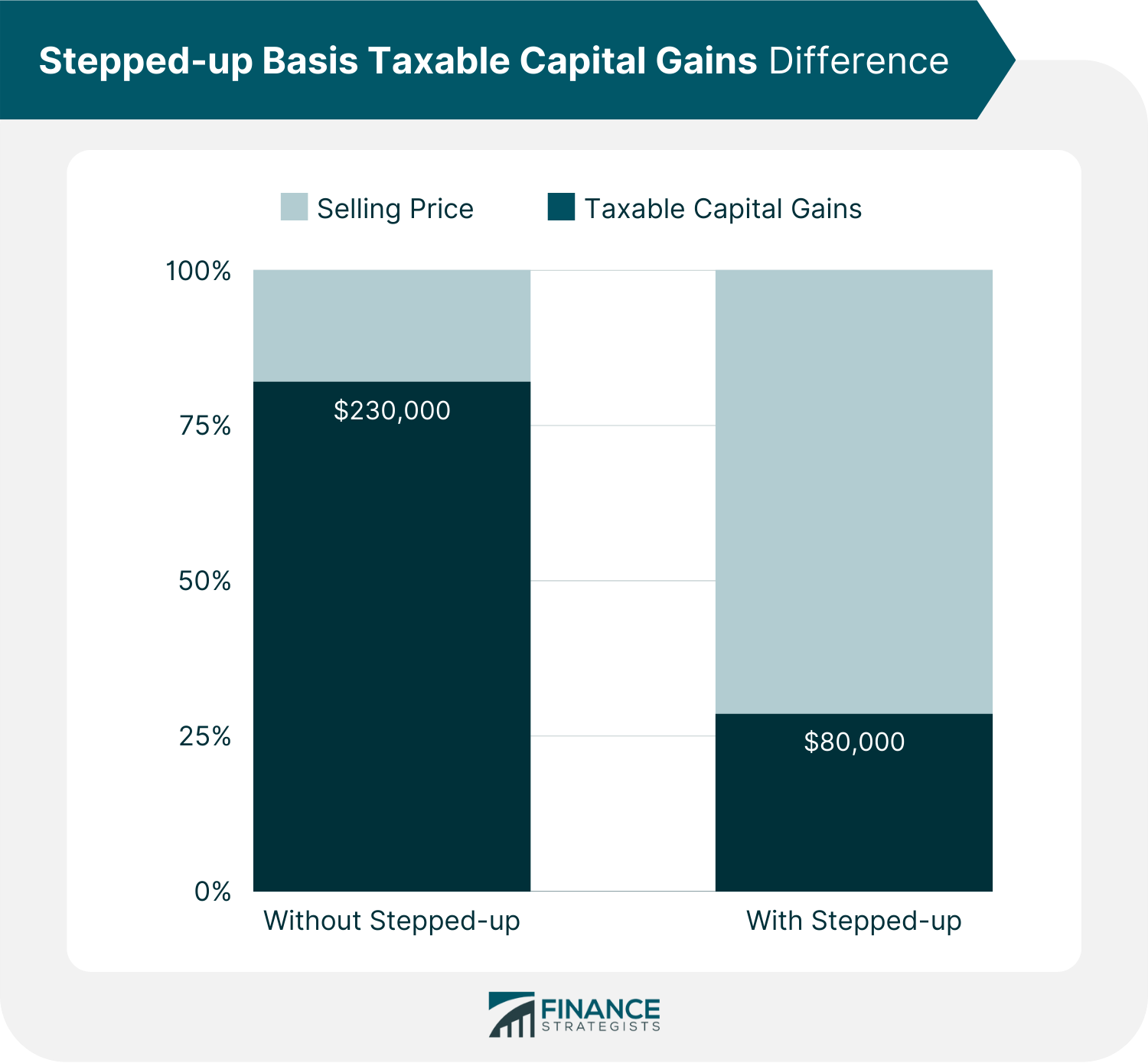 Stepped-up basis is controversial because it shields some capital gains from ever being taxed, according to critics. They claim that the provision is a tax-shielding tactic that largely favors rich taxpayers.

Others contend that getting rid of the stepped-up basis would result in double taxation because the capital gains tax and estate tax would combine.

Only a few estates, nevertheless, will exceed the exemption amount for inheritance taxes.

Alternatives to the Stepped-up Basis

Several appeals are attempted to address the loopholes of stepped-up basis. The purpose is to increase the tax code's efficiency and promote fairness while bringing in new revenues. Below are some of the proposals:

The Biden administration has proposed a system where wealthy people will have to pay capital gains taxes when they give or leave assets to their heirs. For tax purposes, it would appear that the gains had come from selling to a third party.

Couples can still use the stepped-up basis rule for up to $2 million in gains ($1 million per person). This plan will only affect a small number of families with significant gains that have not been taxed.

The plan allows those who inherit family farms and companies to postpone paying taxes on the original owner's profits. The family members must retain ownership and management of the property or business.

The carryover basis determines the capital gains on a transferred asset using the original grantor's purchase price. This translates to a relatively more significant capital gains tax for the federal government.

In contrast, a stepped-up basis for inherited assets considers the market value at the time of inheritance.

Legislators are considering putting a billionaire's income tax in place. Reports say that only billionaires and people with more than $100 million annual income would have to pay it.

This alternative creates a new framework. It would tax capital gains as they happen, not when assets are sold or given to someone else.

The stepped-up basis is a valuable way for beneficiaries to preserve their inheritance and minimize the impact of taxation.

It allows them to utilize the asset's current market worth rather than the initial price, thereby saving significant sums in capital gains taxes when the asset is sold.

Some view this policy as a tax loophole because it allows wealthy persons to lower their tax payments significantly.

Legislators proposed alternatives to deal with the loopholes, like making wealthy households pay a capital gains tax after reaching a specific limit.

Paying for the entire capital gain and imposing a tax on billionaires are alternatives to a stepped-up basis.

You may consult an estate planning lawyer for more information on a stepped-up basis.

Does the spouse receive a stepped-up basis?

How do you calculate a stepped-up basis tax?

What assets get a stepped-up basis at death?

The stepped-up basis applies to all inherited assets, including stocks, bonds, real estate, and personal property.

What is a stepped-up basis?

A stepped-up basis allows the value of inherited assets to be adjusted to the current fair market value when transferred after death.

Is a stepped-up basis a tax loophole?

Some think a stepped-up basis is a loophole allowing wealthy individuals to pass down huge portions of their assets without incurring expensive tax liabilities.