Per Stirpes vs Per Capita: An Overview

Per stirpes and per capita are both legal terms used in the law of inheritance and estate, specifically in drafting a last will and testament.

Both are designation methods that dictate how the assets of the testator (the person making the last will and testament) will be distributed in the event that a specific beneficiary passes away ahead of him.

It is important to understand how each one works before making a decision.

This article will focus on the differences between the application of these terms in estate planning.

What Is Per Stirpes?

The term per stirpes has a Latin origin which translates as “by roots” or “by branch.”

Beneficiaries with the nearest linear relationship to the testator will inherit an equal share of the estate when the latter passes away.

If one of the named beneficiaries dies ahead of the testator, the deceased beneficiary’s share will be equally divided among his heirs, usually children.

Per stirpes states an equal asset distribution for each “branch” of a family tree. The children of the deceased beneficiary may represent their parents. Spouses, however, are not considered in a per stirpes distribution.

Example of Per Stirpes

“I leave my entire estate to my descendants, per stirpes.”

If all three children of Alex survive him, each of them will inherit one-third of his estate. 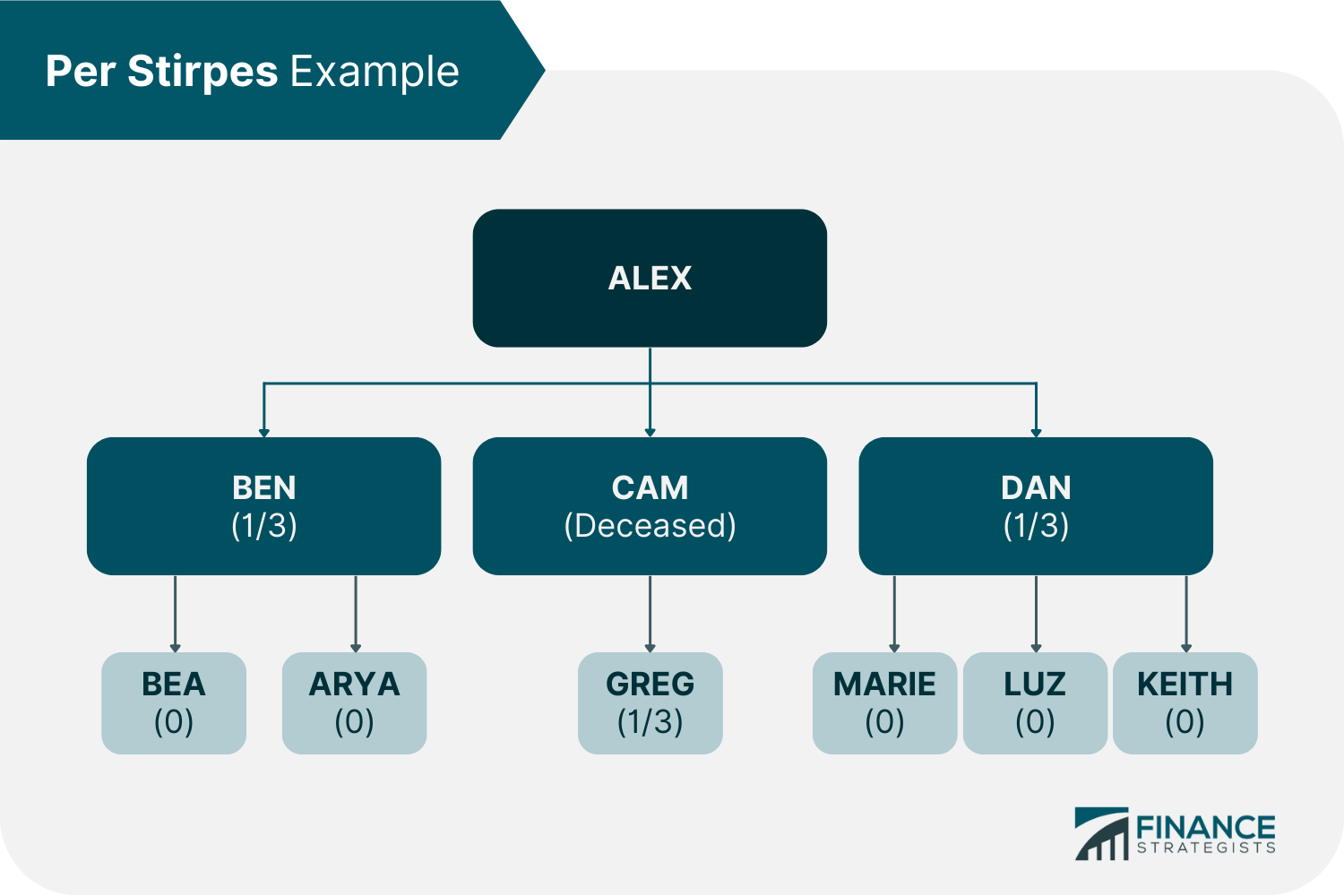 The idea of per stirpes is that the grandchildren would have to inherit their parent’s share one day so it is fair to apportion the deceased child’s share to them.

Pros and Cons of Per Stirpes

With a per stirpes distribution, there is no need to amend the will if a child is born within the line of succession after the will has been executed. The child will automatically be included as a beneficiary through the right of representation.

Per stirpes can also eliminate the possibility of instigating a family feud among siblings over who will get what since the assets are distributed on a linear approach.

Typically, assets are passed on from generation to generation. The testator is assured that his assets are kept within the same branch of the family.

However, with the use of per stirpes designation, it is possible to have a non-related person take over some assets. This may happen if an in-law is managing the assets on behalf of minor children.

Per stirpes distribution may also trigger an unequal distribution of assets if some beneficiaries have more children than others.

What Is Per Capita?

Per capita is another designation option that can be used in a will. Per capita means “by heads.” This method shares the assets equally among surviving descendants in the same generation nearest the testator.

The shares of the predeceased beneficiary return to the estate unless the testator specifies that children and grandchildren are equal descendants in his will.

Example of Per Capita

Refer back to the previous example. This time, Alex’s will states that:

“I leave my entire estate to my descendants, per capita.”

If all three children survive Alex, each of them will inherit one-third of the estate.

However, let us assume that Cam dies ahead of Alex. Per capita designation would mean that Ben and Dan each inherit one-half of Alex’s estate. Greg would not receive anything, as well as Bea, Arya, Marie, Luz, and Keith. 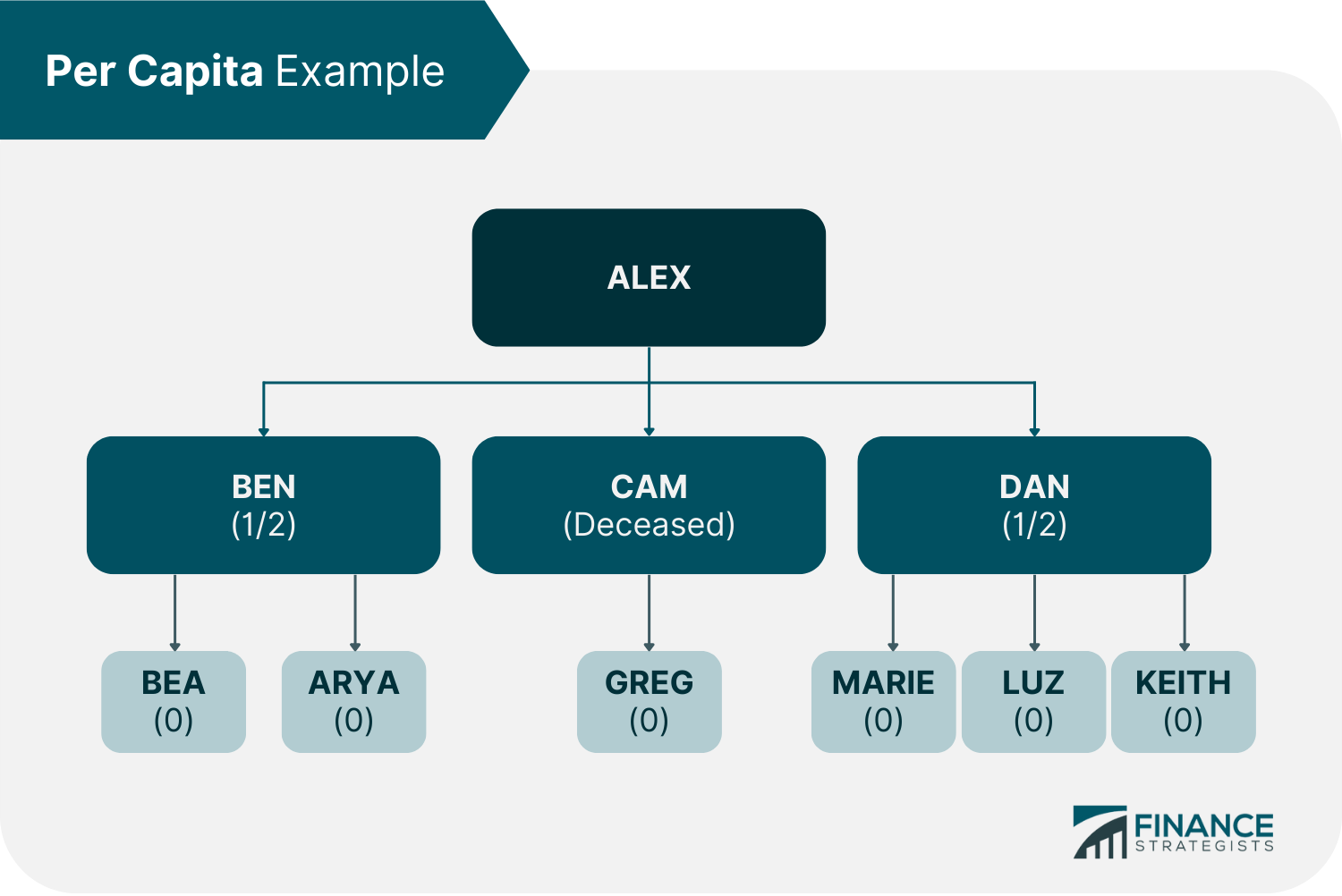 With the per capita designation, the testator can specify if his assets will be distributed to his children, grandchildren, or both.

In this case, if Alex specified that children and grandchildren are equal descendants, Ben, Dan, and Greg would each receive one-third of his assets. The other grandchildren will still not receive anything.

In a case where all the children of Alex predecease him, then the grandchildren would each inherit an equal part of the estate. This means that Greg, Bea, Arya, Marie, Luz, and Keith will each receive one-sixth of the estate of their grandfather in a per capita distribution.

With per stirpes, the grandchildren will inherit their parent’s share. This means that Bea and Arya will split Ben’s one-third share. Cam’s son, Greg, will get the full one-third to himself. Marie, Luz, and Keith will likewise split Dan’s one-third share.

Pros and Cons of Per Capita

Per capita distributions are very simple to calculate and execute, as it provides for surviving beneficiaries at the time the will is executed. Deceased beneficiaries lose their rights unless explicitly specified in the will.

Per capita distributions can help to avoid conflict among beneficiaries because the testator’s assets are distributed equally.

However, this method of distribution does not come without disadvantages.

Per capita distribution can trigger the generation-skipping transfer tax (GSTT) if the estate is large enough. This tax is imposed on transfers of property to someone who is two or more generations below the testator.

Also, if the deceased wanted to leave a larger share of the estate to their children than their grandchildren, a per capita distribution would not allow for this type of distribution. Per capita provides for equal shares among them.

Per capita distributions can result in unintended consequences if beneficiaries have died before the distribution is made.

For example, if there are three children and one grandchild, but two of the children have passed away, the grandchild would receive an equal share of the surviving child.

Key Differences Between Per Stirpes and Per Capita

Finally, per stirpes takes into account the relationships between beneficiaries while per capita does not. With per stirpes, a testator can leave a greater share of assets to their children than grandchildren if they so choose. Per capita would give each person an equal share regardless of relationship. 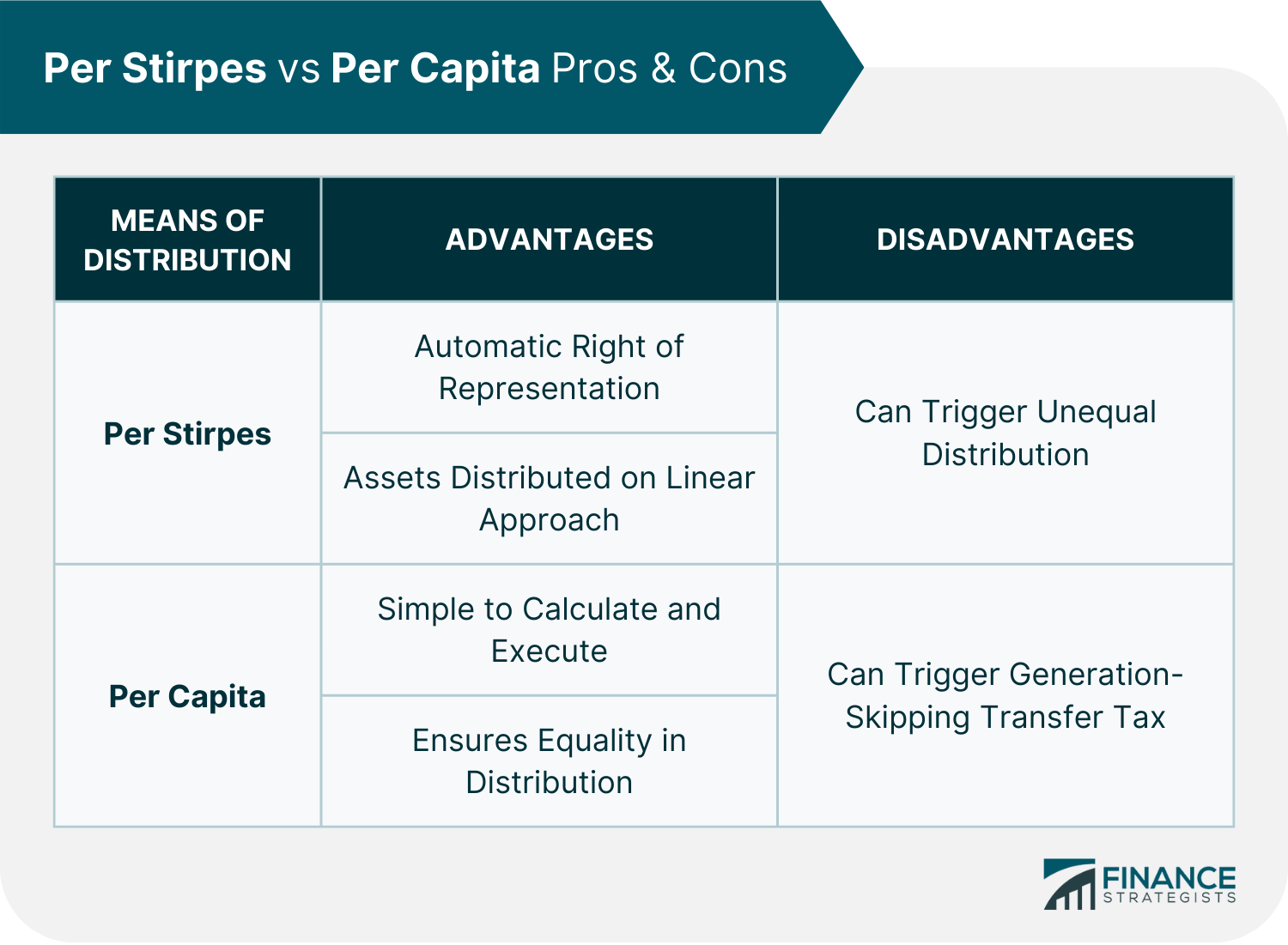 A will is created to document your final wishes so that they may be carried out when you die.

A per stirpes distribution simplifies the distribution process and is favorable if you are comfortable with your children’s descendants inheriting.

Per capita distribution gives you greater control but because it does not imply the right of representation, you may have to update your will’s stipulations when new children are born into the family or after a beneficiary predeceases you.

If your estate is large enough to be taxable, per capita may trigger the generation-skipping transfer tax.

It is important to note the long-term consequences of your decision. With this, consider utilizing the tool that will be most beneficial and the one that would leave a lasting impact to your loved ones.

Consider talking to an estate planning lawyer or a finance expert to help you weigh your options.

What is a per capita beneficiary?

A beneficiary under a per capita designation is one of the surviving descendants of the same generation next to the testator. A per capita beneficiary is entitled to an equal share of the assets.

What does per capita distribution mean?

Per capita distribution implies that the beneficiary’s inheritance would be divided evenly amongst the surviving beneficiaries within the same generation unless explicitly specified that the next generation is also recognized as heirs.

How does per stirpes work?

With a per stirpes designation, when a beneficiary dies ahead of the testator, his share will be equally divided among his heirs, usually his children.

What is an example of per stirpes?

Here is a sample scenario to illustrate the application of per stirpes in a will. Alex, the testator, has three children: Ben, Cam, and Dan. He assigns his assets to each of them in equal shares, per stirpes. Cam has a son, Greg. Ben and Dan do not have children. Cam dies ahead of her father, Alex. Ben and Dan will each receive one-third of Alex’s estate. Cam’s son, Greg, will inherit her share by representation and will get one-third of Alex’s estate.

Which is better between per stirpes and per capita?

Per stirpes and per capita designation methods are both useful. To answer the question of which is better would be subjective to the situation and family dynamics. If the testator wants to take advantage of the inheritance by representation, it is advised to use per stirpes. If the testator wants to leave his assets only to one line of generation, per capita is advisable.