A stock market crash is a sudden and steep decline in the prices of individual stocks that leads to a market-wide decline. Such crashes can cause enormous destruction of shareholder wealth and markets generally take several years to recoup from them. Some factors responsible for stock market crashes include:

Stock exchanges and regulators have instituted control measures and tools to prevent recurrence of crashes and safeguard investors.

While the reasons for stock market crashes are still a topic of debate, they have certain common characteristics: 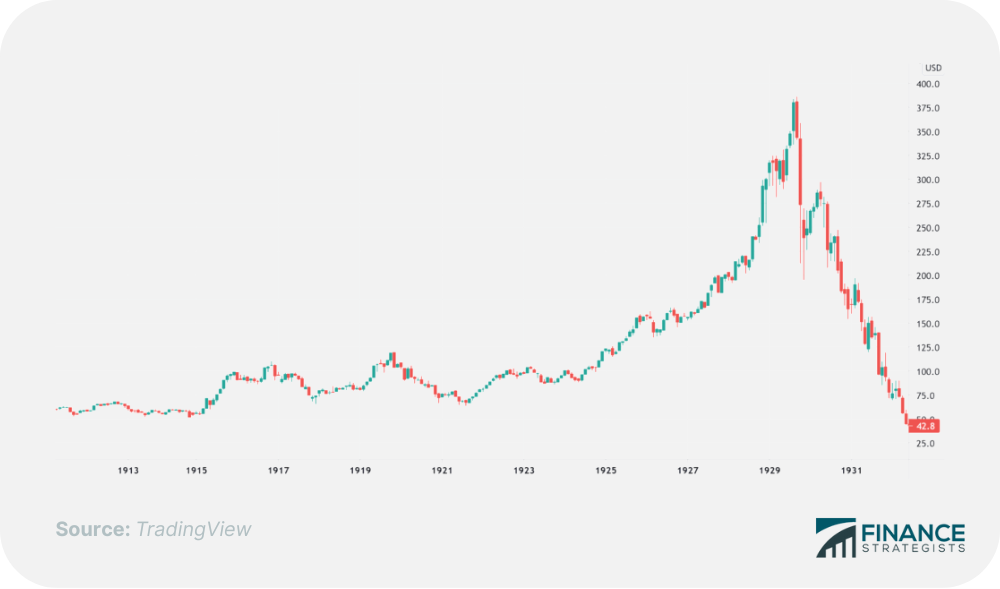 Later crashes have had similar patterns. The 1987 stock market crash featured the biggest single-day decline of 22.6 percent in the history of the Dow Jones Industrial Average (DJIA). 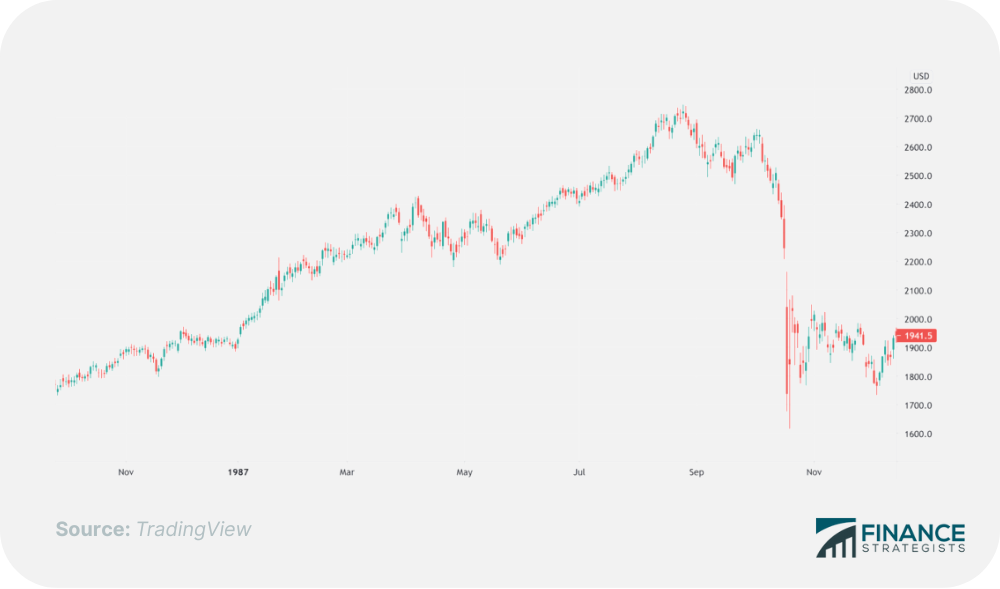 Cumulatively, the index shed approximately 31% between October 14 and October 19 during that crash.

Speed of the Decline

Increase in the Number of Margin Calls

An increase in the number of margin calls is also common to most crashes. Many traders buy stocks on margin, meaning they borrow money from a broker in order to make trades. When stock markets crash, investor’s account balances threaten to become negative. Brokers will force trades to be closed to keep this from happening. This process is known as a “margin call.” When a broker forces a trade to be closed, the position is sold, which in turn drops the stock price. This drop in price forces more traders to close their positions. That’s why a rise in margin calls can have a domino-effect on falling stock prices during a crash. According to research, the number of margin calls multiplied during the 1929 stock market crash. Outstanding margin credit rose from $1 billion at the beginning of the 1920s to $17 billion in the summer of 1929. Margin calls were also found to be among the top causative factors for a 2015 crash at the Shanghai stock market.

Because of the wide range of factors that affect inter-connected and global financial markets, it is difficult to identify factors that lead to crashes. Despite the difficulty, regulators have developed tools to prevent and limit the impact of stock market crashes.

The Formation of the SEC

Perhaps the most significant development in prevention of stock market crashes was the formation of the Securities and Exchange Commission (SEC) in 1933. Before the SEC was formed, stock trading was considered Wild West territory with no federal oversight and minimal state requirements. Prior to the formation of the SEC in 1933, the stock market was regulated by Blue Sky laws. Blue Sky laws only required security issuers to inform state officials about their security; they were not required to verify or validate their assertions of profits with proof or revenue numbers through standardized reporting mechanisms. As a result, frauds were rampant in almost every sector. The absence of regulation emboldened issuers of stocks to promise massive profits to investors without much evidence. The SEC mandated adequate disclosure and financial information for investors from security issuers. Even though the stock market grew in size with the entry of new investors, it did not lurch forward in the boom-and-bust cycles that characterized its operations earlier.

The introduction of circuit breakers in 1987 is another major useful development in preventing crashes. A circuit breaker will temporarily freeze trading if the stock market drops too much in one day. According to the NYSE:

Circuit breakers are designed to slow the effects of extreme price movement through coordinated trading halts across securities markets when severe price declines reach levels that may exhaust market liquidity.

There are 3 thresholds of price drops that trigger a halt:

There have been multiple crashes, big and small, in the stock market’s history. Here’s a look at three of them.

Perhaps the most well-known example of a crash is the precipitous decline in stock market valuations in just five days in October 1929. Billions of dollars of shareholder wealth built up in the preceding decade of boom was eviscerated in just five days. It also marked the onset of the Great Depression. The excesses of the roaring 1920s are generally considered to be the main factor responsible for the crash. According to the common narrative, speculation in the stock market had skyrocketed stock prices to unsustainable levels in the economy. This version makes for a good and dramatic story arc but it is not the only one. The jury is still out on reasons for the crash. For example, in his book Beating the Bear: Lessons from the 1929 Crash Applied to Today's World, Harold Bierman Jr. contradicts assertions of high stock valuations by showing that valuations of measures like price-to-earnings ratio for stocks were fairly reasonable even by contemporary standards. It is more likely that the actions of the Federal Reserve in concert with the political establishment’s pronouncements were responsible for the crash. Adolph Miller, a Federal Reserve Governor, thought speculative activity had increased in the stock market leading up to 1929. He sought to bring it down by curtailing bank credit towards stock purchases. The Federal Reserve’s bulletin at the beginning of that year explicitly told banks to reduce the number of loans made using stocks as collateral. Financial institutions complied, throwing investors and traders into confusion. Public officials, including President Herbert Hoover, further fed the panic by making dire warnings about speculation and high stock prices. The 1929 crash also established a script of sorts to handle future economic crises. After the crash, the New York Fed purchased government securities in the open market, made loans to banks through its discount window, and reduced interest rates to calm the markets.

The 1987 Black Monday crash, which occurred on October 19, is notable for the single-biggest percentage decline in the Dow Jones Industrial Average’s history. The events that led up to this decline were mostly similar to those for the 1929 crash, except their scope and scale was much bigger because a global and connected economy was taking shape. There was talk of asset bubbles forming that year. The Dow Jones index had also been on a roll in 1987, had surged to 44% by late August since the year’s start. The US dollar’s devaluation from the 1985 Plaza Accord had boosted US exports and helped control the country’s trade deficits with its trading partners.

The Black Monday crash started halfway around the world in Asia, when Japanese indexes began plunging in response to the declines and uncertainty plaguing American markets in the preceding days. Subsequently the crash traveled westwards and traders in Europe and America logged into their workstations the morning of October 19 to discover red marks against indices. The valuations fell further as the day unfolded and, by its end, culminated in a fall of 508 points (or 22.6% from the previous day’s close) for the Dow Jones index. As the crash was occurring, analysts and experts were predicting the onset of another economic depression, similar to the one that occurred after the 1929 stock market crash. But their predictions were wrong. Markets began recovering as soon as the next day. The Dow recovered 57% of its losses in just two trading sessions the following day and the expected depression did not occur.

The 1987 stock market crash resulted in significant changes to market structure and rules. The SEC streamlined trading practices between futures, options, and stock markets to ensure uniformity in practice and reduce the risk of defaults. The most important change, however, was the introduction of circuit breakers to arrest unmitigated crashes in stock prices due to computerized systems. In today’s age, when an overwhelming majority of stocks are traded online or via computer systems, the use of breakers has become critical to prevent algorithms from running amok and maintaining order in the markets.

September 2008: The Crash that Started the Great Recession

A series of events were responsible for the stock market crash that occurred on September 29, 2008:

Those losses continued over the next week. The next day, the index gained 300 points amid talk of passage of the bill but, even after the bill was passed, investor confidence was rattled and the index lost 150 points by the day’s end. Talk of an impending recession also spooked investors in the coming days and the Dow posted losses of 18.1% the following week.

What is a Stock Market Crash?

A stock market crash is a sudden and steep decline in the prices of individual stocks that leads to a market-wide decline. Such crashes can cause enormous destruction of shareholder wealth and markets generally take several years to recover from them.

What are common causes of a Stock Market Crash?

Some factors for a stock market crash are general economic decline, lack of proper regulation, news events, or system glitches that trigger a massive sale action by investors.

What characterizes a Stock Market Crash?

Common characteristics of a stock market crash include double-digit prices drops, accelerating rate of decline, and an increased number of margin calls.

Can Stock Market Crashes be prevented?

Perhaps the most significant development in prevention of stock market crashes was the formation of the Securities and Exchange Commission (SEC) in 1933. Before the SEC was formed, stock trading was considered Wild West territory with no federal oversight and minimal state requirements.

What is a circuit-breaker in the stock market?

Circuit-breakers are designed to slow the effects of extreme price movement through coordinated trading halts across securities markets when severe price declines reach levels that may exhaust market liquidity.