What Is Bitcoin Cash?

Bitcoin Cash (BCH) is one of the most recognized Bitcoin hard forks. Like Bitcoin, Bitcoin Cash is a peer-to-peer (P2P) digital currency and payment network that is decentralized and supported by an open-source blockchain protocol.

Much like how Bitcoin was intended to be used initially, Bitcoin Cash is designed to be used as a cheap payment system.

Transaction confirmation times are substantially shorter than Bitcoin's, usually taking only a few seconds, and transaction costs are typically less than $0.01.

The Bitcoin Cash Node is an ecosystem that allows users to transact in Bitcoin Cash. It is the blockchain for Bitcoin Cash and can be considered the virtual machine that runs the network, powering transactions.

Bitcoin and Bitcoin Cash use the same blockchain network and consensus mechanism.

The limit for Bitcoin Cash is 21 million tokens, the same as for Bitcoin. As a fork of Bitcoin, it has Satoshi Nakamoto as a common founder.

Bitcoin Cash is a type of cryptocurrency created to address some scalability issues that Bitcoin faces.

Transactions on Bitcoin can often take a long time to process, and this is because the network can only handle a certain number of transactions at a time. Bitcoin Cash was created to improve this by increasing the network's capacity.

Bitcoin Cash is a hard fork of the Bitcoin blockchain that came about in 2017 as a solution to Bitcoin's transaction speed issues.

The new chain has a different protocol that invalidates all previous blocks, requiring nodes to "upgrade" to the new chain to continue using it.

Instead of moving in the same direction as Bitcoin, Bitcoin Cash created its own path. In essence, it is a significant software update that allows the old network to continue in a different route than the new one.

Various miners and developers hoped to create a new cryptocurrency that could better appeal to the mainstream for use in digital transactions by forking the Bitcoin network.

However, some people opposed the Bitcoin Cash hard fork.

Some of these arguments against the Bitcoin Cash hard fork include the larger blocks, which would make mining more complex and centralized, and the forking procedure, which pays those who had Bitcoin at the time of the fork the same amount of Bitcoin Cash.

It is interesting to note that Bitcoin Cash eventually had two forks of its own: Bitcoin Cash ABC (BCHA) and Bitcoin SV (BSV). With only a few exceptions, the former is similar to the first iteration of Bitcoin Cash.

Bitcoin Cash is a cryptocurrency that uses the same basic principle as Bitcoin: it is a decentralized, peer-to-peer payment network supported by an open-source blockchain protocol. 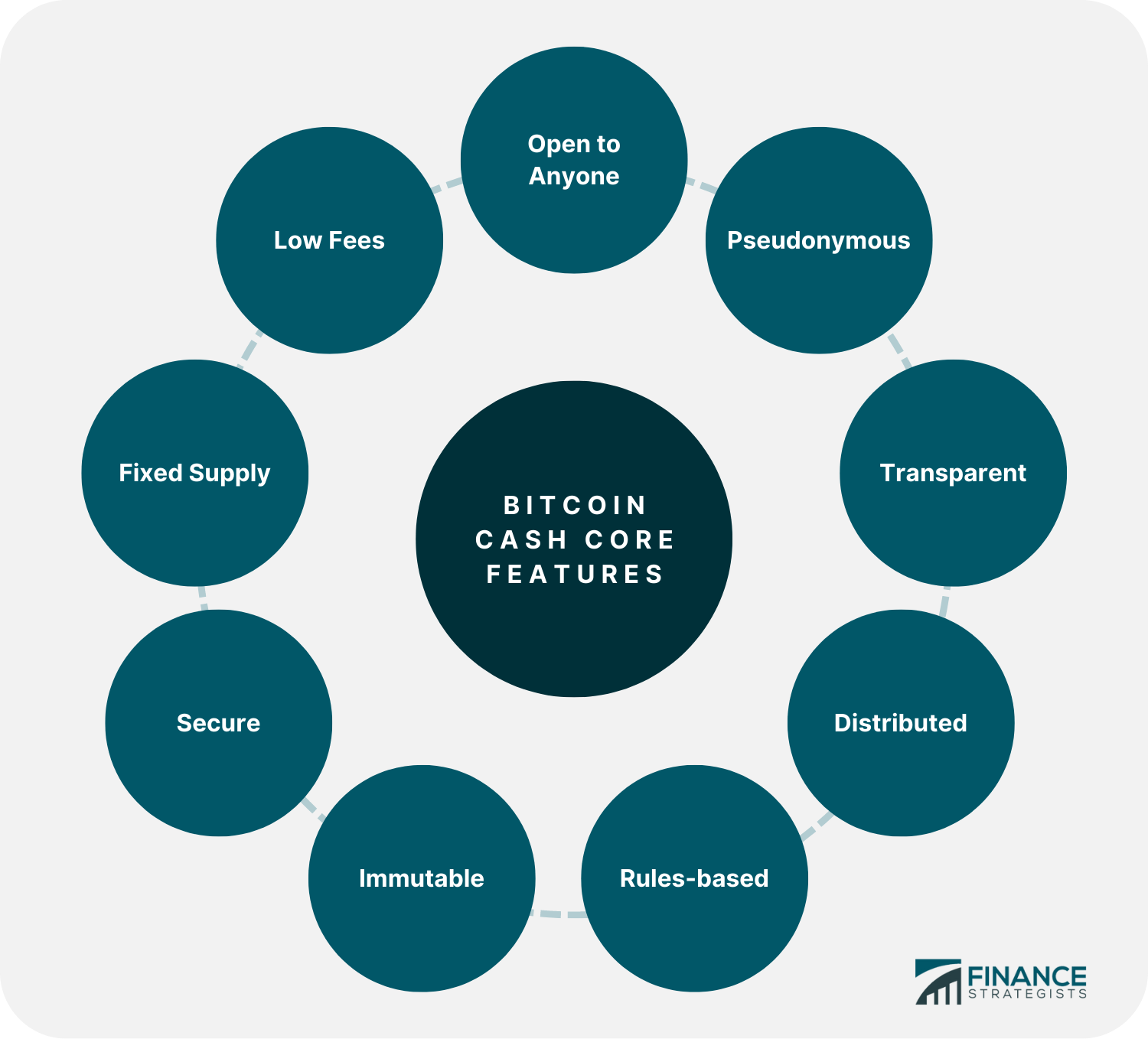 - Open to Anyone: A peer-to-peer blockchain protocol underpins Bitcoin Cash, effectively doing away with the requirement for a centralized authority (such as governments or financial organizations).

Additionally, anyone can access or contribute to Bitcoin Cash for free. This is a crucial quality for attracting users and establishing trust.

- Pseudonymous: Public wallet addresses are not directly connected to personally identifying data. This helps to ensure that anyone can use it without censorship.

- Transparent: The Bitcoin Cash blockchain, like other blockchains, keeps track of every transaction and makes it accessible to everyone.

The blocks that make up a chain on the blockchain are updated at regular intervals. This reduces the possibility of fraud by making it simple for anybody to view the complete history of ownership.

- Distributed: Bitcoin Cash is a distributed ledger, not stored in one centralized location. Instead, it exists on nodes that ensure that information is prolonged.

- Rules-based: Nodes follow a protocol that allows for consensus on the state of a blockchain. This consensus is what determines who owns what.

The protocol can evolve, but a high degree of consensus is required to make changes. This results in Bitcoin Cash being a quasi-political system, with participants forming a social contract.

- Immutable: Bitcoin Cash transactions cannot be reversed once recorded on the blockchain.

- Secure: The Proof of Work (PoW) system is used to add new blocks to the blockchain. This is done by competing miners who use hardware and energy costs to secure the network.

The PoW system is based on game-theory principles and is intended to make it costly and unprofitable for anyone to attack the network.

The capacity to invest in a digital currency depends on its monetary supply and issuance schedule being well-established and transparent.

- Low Fees: Bitcoin Cash is a fast, reliable, and affordable alternative to payment networks like Visa and Mastercard. This makes it an effective way to transact any value without worrying about location or cross-border transactions.

Bitcoin Cash has a few advantages over Bitcoin:

As of 2021, up to 9,000 transactions can be processed per second with Bitcoin Cash. This contributes to lower transaction costs and faster, more reliable transactions.

Furthermore, among the thousands of cryptocurrencies available, Bitcoin Cash is one of the more well-known and is accessible through the most significant exchanges, unlike less well-known competitors.

It is also cheaper than attempting to purchase a single Bitcoin because the Bitcoin Cash per USD price is less than $120.00 per coin.

The differences between Bitcoin and Bitcoin Cash have gradually become more significant as the developers working on each network have different goals. The two cryptocurrencies are now seen as entirely different assets by the community.

The primary difference between Bitcoin and Bitcoin Cash is the difficulty adjustment algorithm added to BCH.

Both networks utilize the SHA-256 algorithm that allows miners to move back and forth between the two networks depending on which is more profitable at the time.

Bitcoin Cash's difficulty adjustment algorithm ensures that blocks are generated at a stable rate every 10 minutes. This is done by either cutting difficulty in half if they are behind schedule or doubling it if they are ahead of schedule.

The block size for Bitcoin Cash is significantly larger than that of Bitcoin, at 32 MB. This makes it possible to handle more transactions per second at a lower cost - less than a penny per transaction.

There are two main ways to issue tokens on top of a blockchain - using the Omni layer, which is used by Bitcoin transactions with "next-generation features," or using the Simple Ledger Protocol (SLP), which is specific to Bitcoin Cash.

Because they are based on different blockchains - users may prefer one or the other depending on their preferences. Although both have seen some adoption, neither has been particularly popular.

The absence of replace-by-fee in the Bitcoin Cash protocol prevents transactions from being canceled/double-spent while unconfirmed, making it more secure than Bitcoin. This also enables near-instant transactions of small amounts.

The Simple Ledger Protocol supports Non-Fungible Tokens, digital tokens that are distinguishable individually. This enables a wide-ranging of potential use cases, such as digital artwork marketplaces and tradeable in-game items. 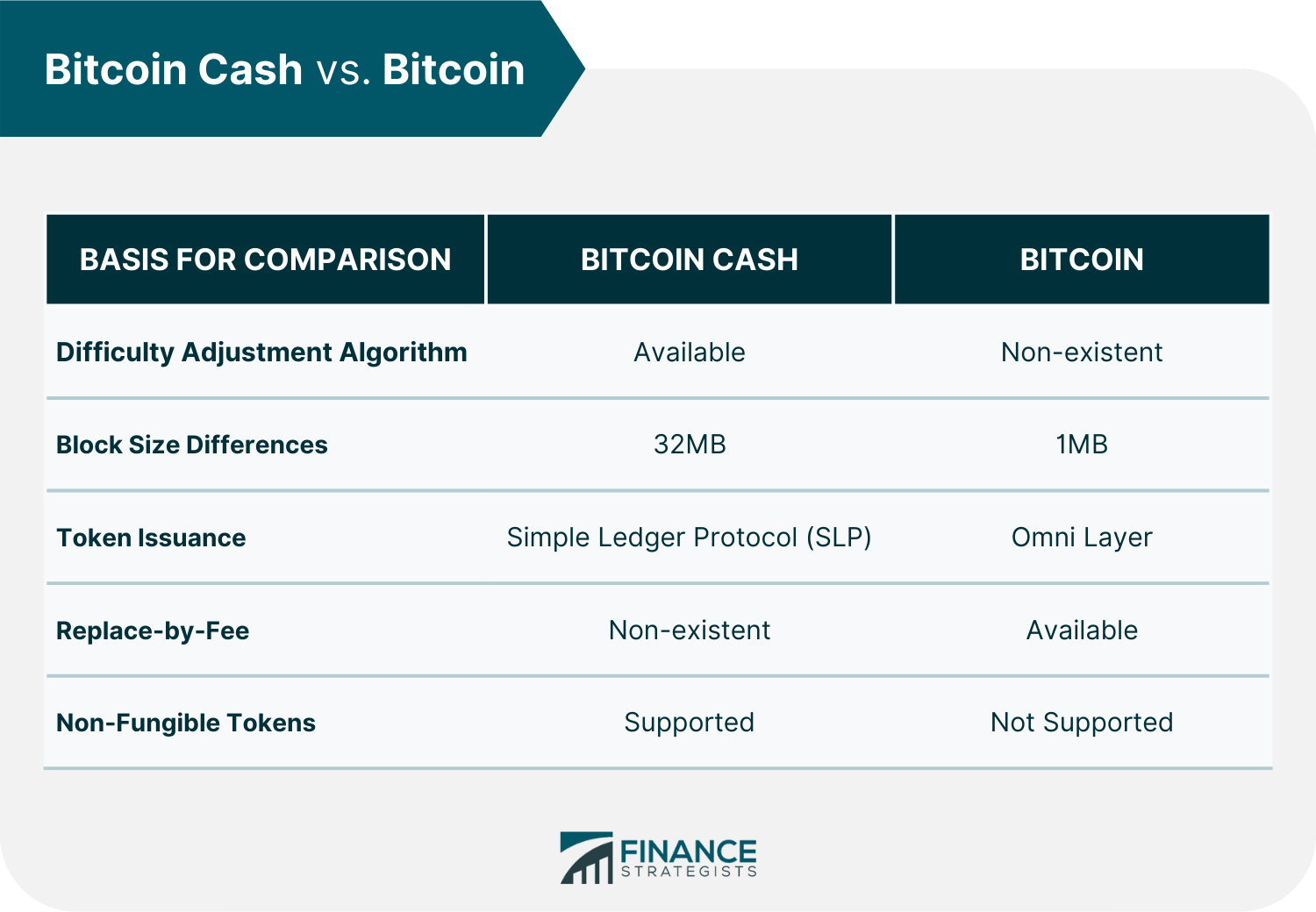 How to Buy Bitcoin Cash

Bitcoin Cash is available for trading on a large number of well-known exchanges.

A photo ID is typically required for Know Your Customer and Anti-Money Laundering verification and, in certain circumstances, residence and income verification. Thus, signing up for an exchange might not be possible anonymously.

Alternatively, a few bitcoin ATMs have the asset available. Find some in your area if you decide to go with this option. Furthermore, PayPal accepts Bitcoin Cash, depending on your country of residency.

Bitcoin Cash is used for a variety of purposes. For example, you can use it to send assets to another person or merchant through a wallet address. Various merchants around the world also accept Bitcoin Cash for payment.

Additionally, some websites accept Bitcoin Cash for travel, goods and services, and more.

However, Bitcoin Cash is not well-known as Bitcoin and is less likely to be accepted by merchants.

Bitcoin Cash is a type of cryptocurrency created as a fork of Bitcoin. It is open to anyone who wishes to use it. It is also transparent, pseudo-anonymous, and decentralized.

Bitcoin Cash has some advantages over Bitcoin, such as lower transaction costs, faster transaction times, and support for smart contracts and token issuance.

However, Bitcoin Cash is not as well-known as Bitcoin and has a smaller market capitalization.

If you are interested in Bitcoin Cash, there are a few ways to buy it, such as on an exchange or from a Bitcoin ATM. Bitcoin Cash can be used to send and receive payments, but it is not as widely accepted as Bitcoin.

Bitcoin Cash is a volatile asset, and its price can fluctuate rapidly. Thus, before investing in any cryptocurrency, it is essential to do your research and understand the risks.

What is bitcoin cash?

Bitcoin Cash is a cryptocurrency that was created as a fork of Bitcoin. Bitcoin Cash is a peer-to-peer digital money and payment network that is decentralized and powered by an open-source blockchain protocol.

Is Bitcoin Cash different from Bitcoin?

What are the differences between Bitcoin Cash and Bitcoin?

How can I buy bitcoin cash?

Bitcoin Cash is available for purchase on several exchanges. You will likely need to verify your identity with Know Your Customer and Anti-Money Laundering verification. Bitcoin Cash can also be bought from Bitcoin ATMs in select locations. PayPal also offers the option to buy Bitcoin Cash in some countries.

Is bitcoin cash better than bitcoin?