What Are the Community Property States?

Any assets and liabilities gained by either spouse during a marriage belongs to both spouses according to community property laws implemented by nine community property states. These may include income, real estate and even debts.

Community property law stipulates that both spouses own everything equally, regardless of who bought it or generated the revenue. The objective is to reduce disputes over ownership and distribution by allowing the law to decide. The nine states that implement community property laws include:

Three additional states, Alaska, South Dakota, and Tennessee, have opt-in community property laws. This means that these states would allow equal property distribution by law if both parties consent.

How Do Community Property Laws Work?

For instance, if one spouse purchased something or took out a loan under their own name, both spouses are still equally liable.

In the event of divorce, assets and liabilities must be divided equally, with some exceptions, such as when a prenuptial agreement is in place.

Assets designated as community property include earned income, savings or retirement accounts, property, vehicles, and even debts incurred during the marriage.
Community property does not include inheritances, gifts given to one spouse, or assets owned before marriage, as it is considered to be separate property.

In community property states, assets are not always considered communal. Exceptions to this include the following:

Property initially owned by one spouse before marriage remains their separate property and cannot be included as community property.

A prenuptial agreement creates a contract between two people before they get married, which may protect certain assets from the community property laws in the event of a divorce.

Assets acquired as a gift or inheritance from a private entity by one spouse remain separate and are not considered community property.

Assets obtained during a period of formal separation are not considered communal property.

When a divorce petition is filed, a valid legal presumption is established that all property and obligations accumulated during the marriage are community property.

Their community property is divided equally between the two spouses. It would make no difference if just one spouse acquired an asset or incurred a debt throughout the marriage.

Unless a spouse can demonstrate that an asset or debt is separate property, it will be split in the property division stage of the divorce proceeding.

Absence of a Will

The court follows the intestate succession laws to identify who will inherit the decedent's properties in the absence of a will. The surviving spouse typically has the first right to inherit.

Effect of Divorce on Spousal Rights After Death

Generally, as long as no prenuptial arrangement was in place, the surviving spouse will be considered widowed. Thus, they are entitled to full ownership of the previously shared community property.

In the event of a finalized divorce, the surviving spouse has no inheritance rights.

If a decedent's marriage was terminated at the time of death, even if the property was not yet divided, the probate court will apply the same standards to the surviving spouse as it does under a finalized divorce. That is, the surviving spouse will not be permitted any inheritance.

Community property states are those where assets acquired during the marriage are considered to be owned equally by both spouses. In the event of a divorce, these assets are divided equally among both parties.

Common property states, on the other hand, do not have laws specifying that assets or liabilities gained during the marriage should be automatically owned together. Instead, assets acquired, or debt incurred with the name of only one spouse will only belong to that individual.

Common property states generally follow the rule of equitable distribution in the event of divorce or death, which means that assets are shared in a fair but not essentially equal manner. This usually takes into account factors such as each spouse's income, earning potential, contribution to the marriage, financial capacity, and health status. 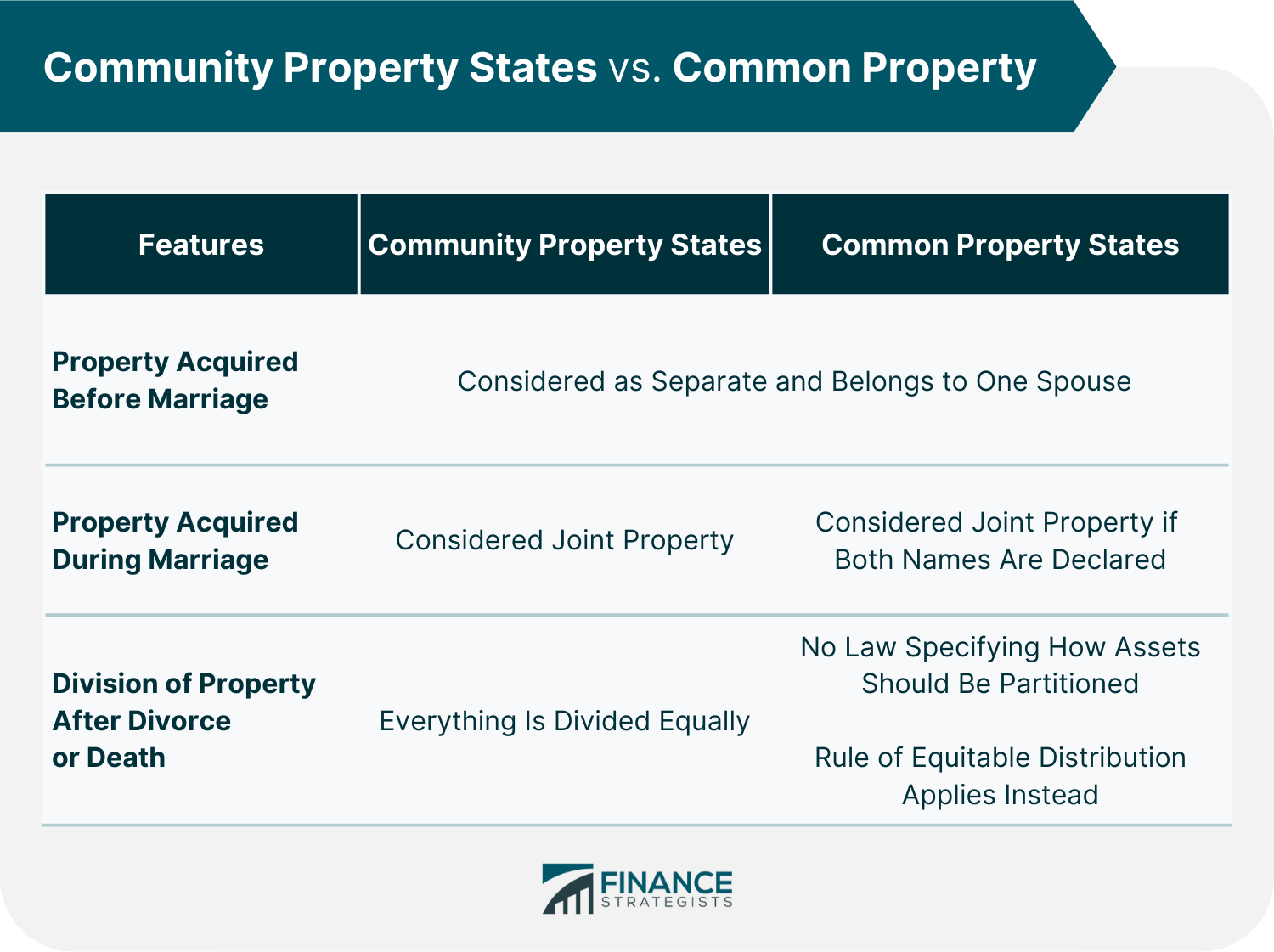 Under community property law, married couples living in these states share equally in the assets and liabilities gained during their marriage.

If they divorce, community property law requires them to distribute both their assets and debts equally. This rule holds true even if one person earns or provides more net income to the home.

Community property law has several limitations. For instance, it does not apply to debts acquired before marriage or property protected by a prenuptial agreement.

It also does not include inherited assets or gifts given to only one spouse.

Community property laws aim to reduce disputes over ownership and ease the burden of couples by allowing the law to decide on distribution.

What are the community property states?

What is the purpose of community property law?

Community property law is designed to reduce disputes among spouses over ownership and distribution of assets. By mandating that assets be held together and divided equally in the event of divorce or death, community property law takes the burden off of couples to negotiate these terms on their own.

Common property law does not have laws specifying how marital assets should be divided and follows equitable distribution. This means assets are shared in a fair but not necessarily equal manner. Community property law, on the other hand, considers assets acquired during the marriage to be owned equally by both spouses and generally divides them equally in the event of divorce or death.

When do community property laws unapply?

First, it does not apply to inherited assets or gifts given to just one spouse. Second, it may not apply to property acquired during legal separation or before marriage. Finally, community property laws may be superseded by a prenuptial agreement.

What is considered as a married couple’s joint property in community property states?

Married couples in community property states are considered to own all property acquired during the marriage equally. This includes assets such as homes, cars, furniture, and bank accounts, as well as income earned by either spouse during the marriage. Gifts and inheritances given to both spouses are also considered joint property.