What Is an Inherited IRA?

An Inherited Roth Individual Retirement Arrangement (Inherited Roth IRA) is a retirement account created when a deceased individual's Roth IRA is passed on to their beneficiary.

The beneficiary can be anybody the decedent has chosen, including a spouse, relative, unrelated party, or corporation. The rules governing an inherited Roth IRA vary for spouses and non-spouses.

Contributions to a Roth IRA are made using after-tax dollars. So withdrawals are mostly tax-free for both the original owner and the inheritor, provided that they follow the rules.

Inheriting a Roth IRA can be an excellent way to build financial security for the future. However, beneficiaries need to understand the rules behind inheriting a retirement account so that they can take full advantage of this opportunity.

Below are some guidelines that surviving spouses need to consider when inheriting a Roth IRA:

If the surviving spouse is the sole beneficiary of the inherited Roth IRA, they can take ownership of the account as if it were their own. They can also transfer the assets from the deceased’s account into their own account or a brand new account.

The account will again be covered by the same rules governing regular Roth IRAs. Thus, all funds withdrawn before age 59 ½ will be subjected to a 10% early withdrawal penalty. Also, earnings withdrawn within the five-year holding period will be taxed.

Spouses can receive a regular income stream from an inherited Roth IRA account throughout their expected lifetime. This amount is computed annually based on the age and life expectancy of the surviving spouse using the Single Life Expectancy Table.

Unlike the previous option, surviving spouses cannot make additional contributions to the account under this method. Instead, they may only make mandatory withdrawals, known as Required Minimum Distributions (RMDs).

Withdrawals under this method are not subject to the 10% early withdrawal penalty because surviving spouses are required to begin taking RMDs on the year when the decedent would have turned 72 years old or on December 31 of the year after their death, whichever is later.

Surviving spouses can also opt to deplete the funds in the inherited Roth IRA over a period of ten years. They may withdraw it all at once or in installments, so long as they withdraw all assets before December 31 on the tenth year following their spouse's death.

Under this method, there are no required minimum distributions, and any funds withdrawn will be exempted from the 10% early withdrawal penalty.

Surviving spouses can also withdraw the inherited Roth IRA funds in a single payment. However, they will owe taxes on any earnings gained if the account was created less than five years before the death of the original plan owner.

Children, grandchildren, other family members, and friends are examples of non-spouses. Non-spouse beneficiaries have three alternatives when inheriting a Roth IRA:

Non-spouse beneficiaries may also receive a regular income stream from an inherited Roth IRA account throughout their expected lifetime. Similarly, they must make the required minimum distributions every year and are exempted from the 10% early withdrawal penalty.

Previously, this method was made available for all non-spouse beneficiaries. However, with the establishment of the Setting Every Community Up for Retirement Enhancement (SECURE) Act, only eligible beneficiaries, such as minor children of the decedent may avail of this option.

Below is a list of all the eligible beneficiaries who may avail of this option. 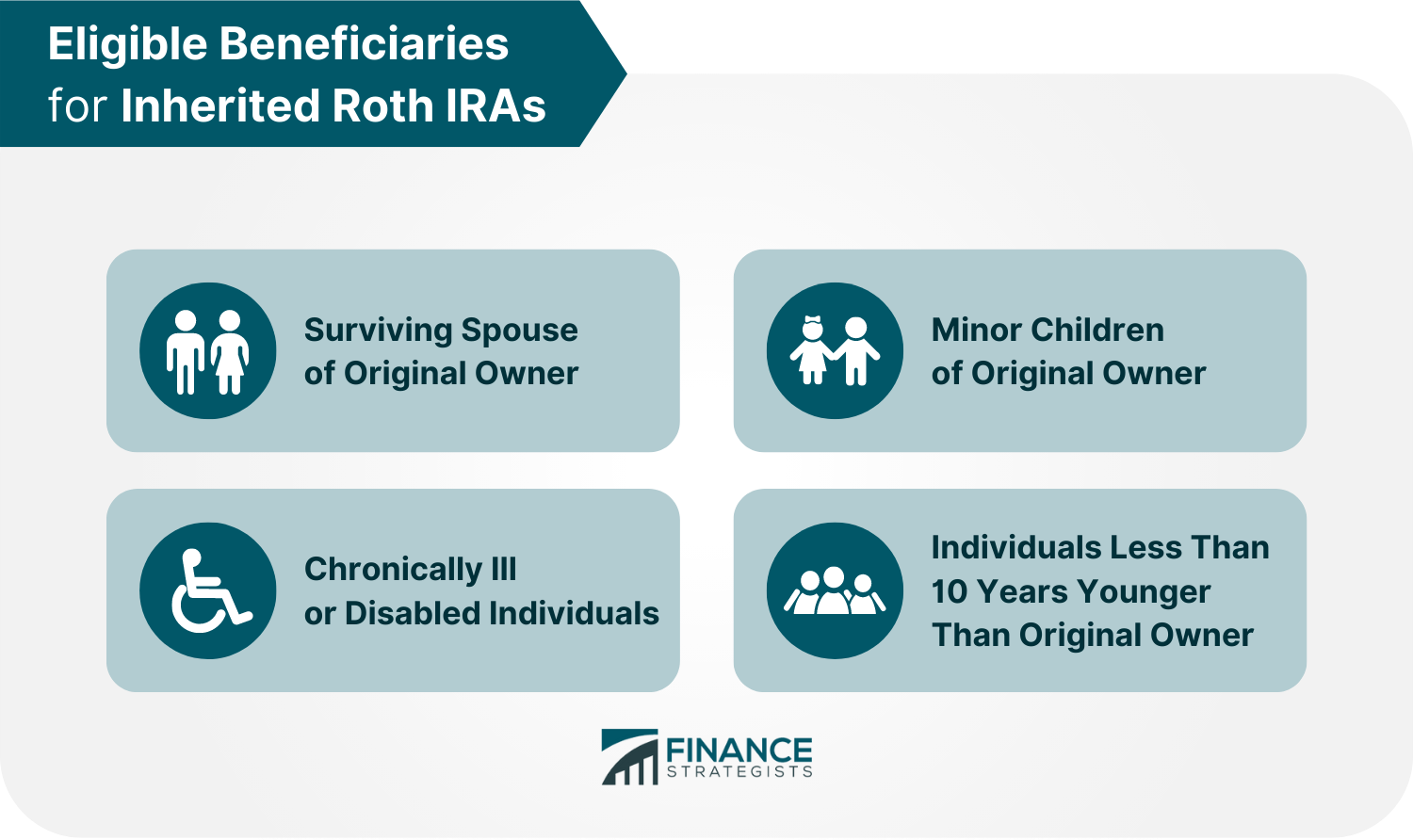 Before the passing of the SECURE Act, non-spouse beneficiaries could opt to deplete the account balance over a period of 5 years.

After the establishment of this Act, non-eligible beneficiaries were encouraged to make all withdrawals within ten years following the original account owner's death since they could no longer avail of the life expectancy method.

Both eligible and non-eligible beneficiaries can still avail of the single payment option.

Contributions previously made to the account can be withdrawn tax-free. However, taxes may still need to be paid on any earnings gained if the account was created less than five years before the death of the original plan owner. 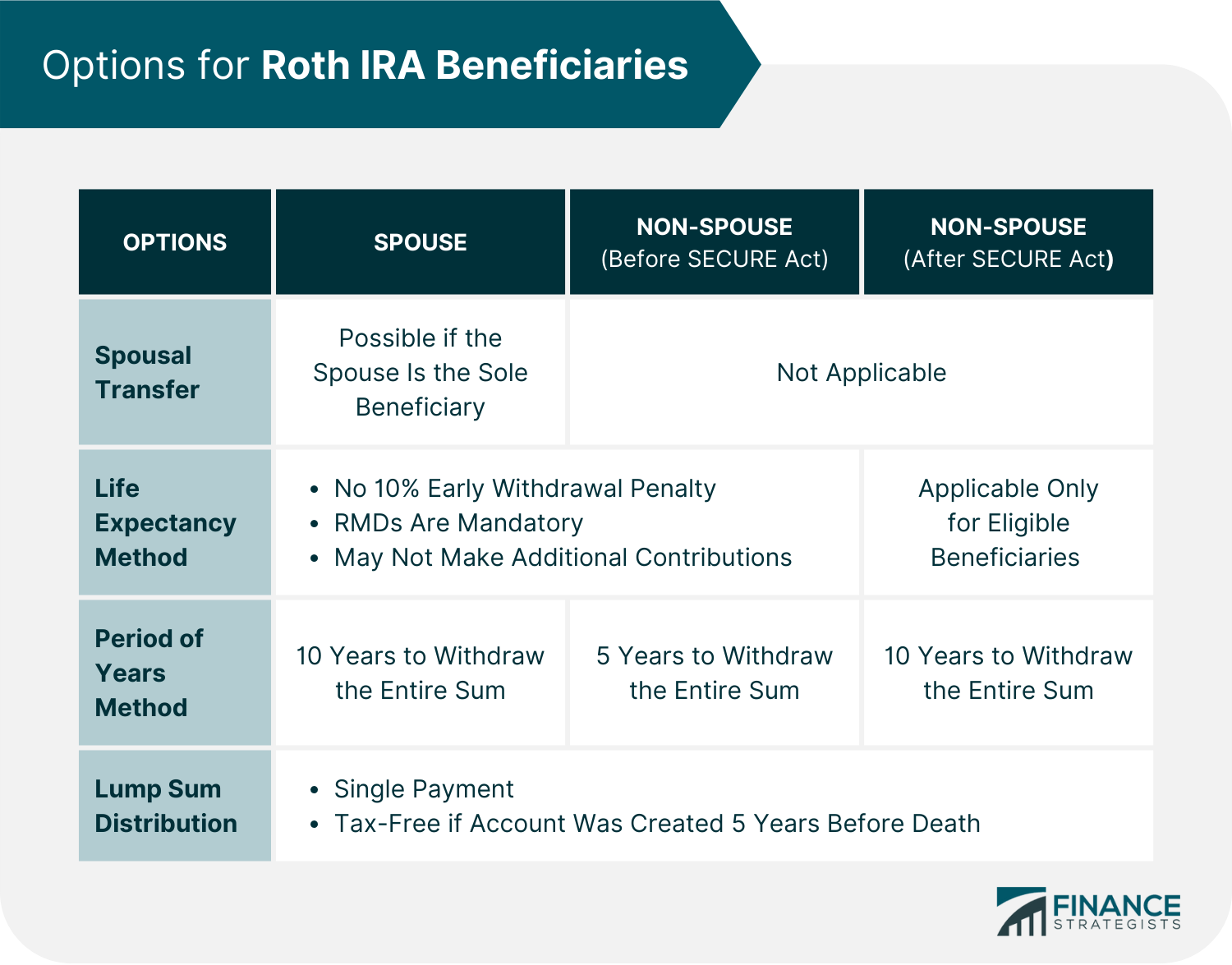 There are several tax consequences that beneficiaries may need to take note of. These include:

Generally, withdrawals from Inherited Roth IRAs can be considered qualified distributions. In cases where they do not qualify, these withdrawals will be taxed as regular income.

There are some tax strategies that can be used to minimize the tax liability of an inherited Roth IRA:

Under some inheritance options, beneficiaries may be asked to make required minimum distributions. While this can be another income source, RMDs are taxed and might raise their tax bracket and overall tax liability.

Beneficiaries can address this by delaying or deferring withdrawals. For example, in the case of spousal transfer, surviving spouses can technically begin withdrawing by age 59 ½ without penalties. However, they are encouraged to delay until age 72 when it is already necessary.

Under some options, beneficiaries can spread their Roth IRA withdrawals over a period of years. However, they are not required to withdraw the same amount every single time.

This income-leveling approach ensures that beneficiaries stay in the tax bracket they would like to maintain while also steadily depleting the funds in their inheritance, as required by their chosen method.

When managed well, beneficiaries can avoid paying additional taxes on inherited Roth IRAs. They can take note of how much and when they withdraw so that they can be sure they are only withdrawing contributions that were already previously taxed.

If they accidentally withdraw earnings, they might be charged additional taxes if the 5-year holding period for these funds has not yet passed. This period begins when the account is created and includes the years before the original plan owner’s death.

The best way to lessen additional taxes on an inherited IRA is undertaken by the original plan owner before death. During their estate planning process, they can roll over funds from a traditional IRA into a Roth IRA, paying taxes upfront.

By following this method, plan owners save their beneficiaries from paying taxes on the funds in their inherited IRAs.

In both cases, the passing of the SECURE Act meant that non-eligible beneficiaries might no longer avail of the life-expectancy method. For those who are eligible, RMDs must begin either when the decedent would have attained age 72 or December 31 of the year following the death.

There are also crucial differences between the two that beneficiaries need to note.

For example, when inheriting a Roth IRA, the number of years the account has been opened is an important factor in determining if the beneficiary will pay taxes on any earnings gained. In contrast, with an inherited traditional IRA, the decedent's age is a more important factor.

Most importantly, the fundamental difference between the two lies in taxing withdrawals. With traditional IRAs, all withdrawals are taxed. Meanwhile, only earnings may be taxed under Roth IRAs if the withdrawal is made within the five-year holding period.

Below is a summary of the similarities and differences between an inherited Roth IRA versus an inherited traditional IRA. 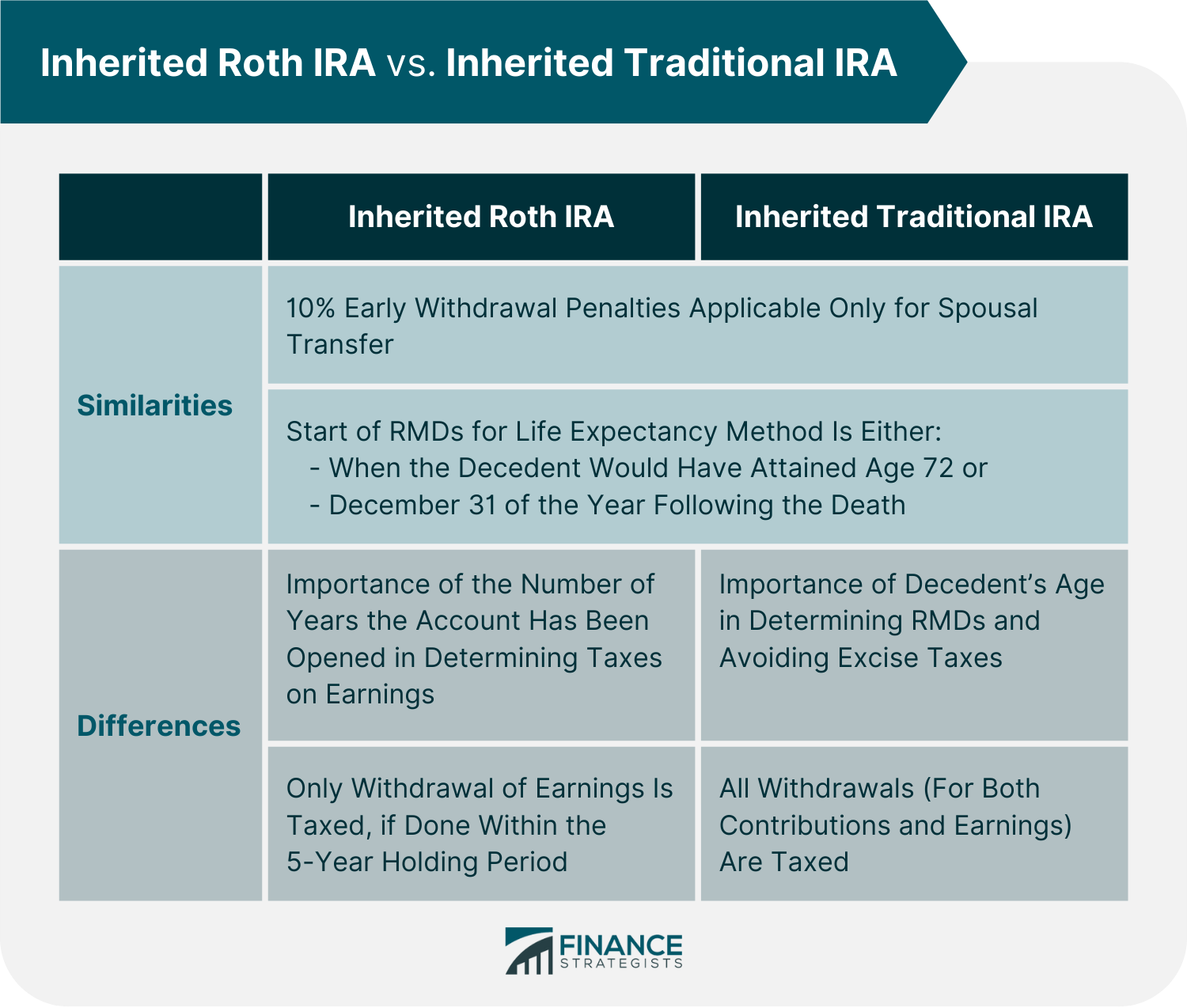 Spouses can transfer the assets from the deceased's account into their own account, create an inherited Roth IRA subject to RMDs, withdraw the entire sum within ten years or withdraw the whole amount at one time.

Non-spouse beneficiaries can only move the assets to an inherited Roth IRA account and receive distributions within ten years, five years, or for a lifetime, depending on their eligibility and the year the original owner died. They also have the option to receive a single payment.

Several tax consequences come with an inherited IRA, whether a Roth or a traditional one. Generally, withdrawal of contributions is tax-free for inherited Roth IRAs. However, withdrawal of earnings is taxable if done before the five-year holding period ends.

There are ways for beneficiaries to avoid taxes on inherited Roth IRA accounts, such as deferring withdrawals, withdrawing higher amounts on years when income is lower, and observing the five-year waiting period.

Inherited Roth IRAs are an excellent way to let assets grow tax-free, but failure to observe certain rules can have heavy tax burdens.

If you have recently inherited a Roth IRA, consider consulting with a financial professional about how to avoid tax consequences and make the most of your inheritance.

The fundamental difference between an inherited IRA and an inherited Roth IRA lies in taxing withdrawals. With the former, all withdrawals are taxed. Meanwhile, only earnings may be taxed under the latter if the withdrawal is made within the five-year holding period.

Is an inherited Roth IRA taxable?

Several tax consequences come with an inherited Roth IRA. Withdrawal of contributions is tax-free, but the withdrawal of earnings is taxable if done before the five-year holding period ends. When beneficiaries do not take RMDs, they may also be subject to a 50% excise tax.

What do I do with an inherited Roth IRA?

Does an inherited Roth IRA have to be distributed in 10 years?

Funds in an inherited Roth IRA do not necessarily have to be distributed within ten years. Instead, surviving spouses and other eligible beneficiaries can opt to keep the funds over their expected lifetime.

What is the five-year rule for an inherited Roth IRA?

Generally, withdrawal of contributions is tax-free for inherited Roth IRAs. However, withdrawal of earnings is taxable if done before the five-year holding period ends. This period begins when the account is created and includes the years before the original plan owner’s death.