Tariffs are basically taxes that countries impose on some goods and services they import. Tariffs are also called duties.

They're taxes on imported goods, which can be specific or ad valorem (often denoted as a percentage of the sale price).

Tariffs are designed to raise revenue for the government and protect domestic industries.

Tariffs are a major source of income for nearly all countries.

The word "tariff" comes from Medieval Latin "tariffe" which referred to a list or register of prices and taxes on commodities at a fair, market, or port.

Aside from tariffs being a source of revenue for the country, it is also an instrument of protectionism.

The Trump administration has proposed to slap tariffs on foreign steel, imported aluminum, and other imported products raising prices for consumers.

It was part of his aim to put "America First."

During his campaign, he asked for tariffs on China to counter the trade deficit.

What Are Tariffs Used For?

People often wonder why government officials collect taxes of any kind since their salaries alone can get expensive, but the truth is governments are just like any other business. To maintain their operations, they need money so they resort to collecting revenue from outside sources.

Governments tax both domestically-produced goods and services as well as imported ones because the revenues are used for different needs.

For instance, they use domestic taxes to pay for infrastructure development, education, healthcare programs or support for low income earners while tariffs are normally collected directly by customs services.

Why Do Countries Have Tariffs?

Countries have tariffs in place to protect infant industries that aren't capable of handling foreign competition since it would be difficult if not impossible for them to compete with larger producers that export similar products into the same markets.

Indirectly, governments also impose these kinds of levies to protect national security since it's easier to defend the nation if there are at least some industries that work on producing essential items locally.

Economists categorize tariffs based on two criteria: type and burden.

It's important to note that there are various types of tariffs, but not all countries impose them all.

At its simplest, there are two types: specific tariffs and ad valorem tariffs.

Specific tariffs are set as a certain monetary amount per unit of the product.

For example, if there's a tariff of $1 on each case of imported beer, it means that importers have to pay the government this specific amount for every case brought into the country.

The drawback with this method is that it can be complicated since they need to calculate exactly how much needs to be paid by multiplying the number of cases by their price per unit.

Ad valorem is a Latin term which means "according to the value" of the goods imported.

It's one of the most common ways tariffs are imposed, which is also why economists commonly refer to them as ad valorem rates.

Setting ad valorem rates requires some math since they need to establish what percentage value is covered by the tariff in question.

For example, if they impose a 25% ad valorem rate on bananas, that means every $100 worth of bananas will be subject to $25 in taxes for an import total of $125.

The advantage with this method is that importers never know exactly how much money they'll have to pay because it depends on their purchase price and not just its quantity or volume.

Sometimes, the government opts for using ad valorem tariffs with differential rates instead.

This means that they have separate rates for different levels of the imported product's value.

They can have them apply to all goods or just specific ones starting at a certain price point.

The biggest benefit is that there is no need to work out how much each item costs since it only depends on its worth up until a certain point after which another tariff applies. 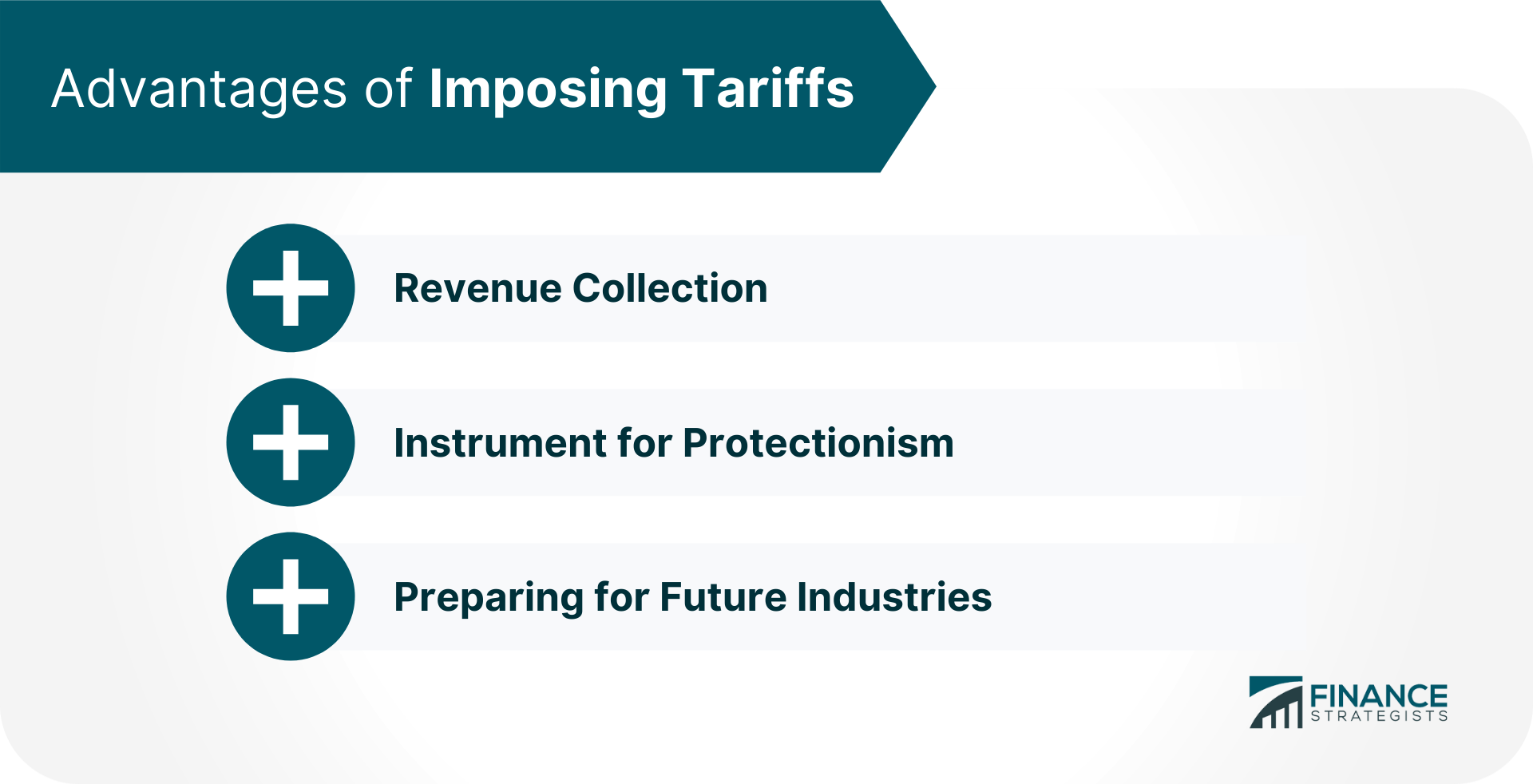 Governments need money to operate and tariffs are one of the most common means to get them.

Depending on how they're implemented, tariffs can provide the necessary revenues in a timely manner.

Tariffs are one of the most popular means to promote local businesses since they're the simplest way to impose trade restrictions.

There are more sophisticated ways to protect domestic firms, but they can be costly so governments usually use them sparingly.

Tariffs are more ideal since they have fewer hurdles to jump over since they need less government intervention unless it's an ad valorem tariff with differential rates.

Sometimes, tariffs are just a stop-gap measure while growing new industries that will replace them in time.

A classic example is when countries impose duties on certain luxury goods after which the import ban on these items gets lifted once their partner country creates enough production capacity for them locally. 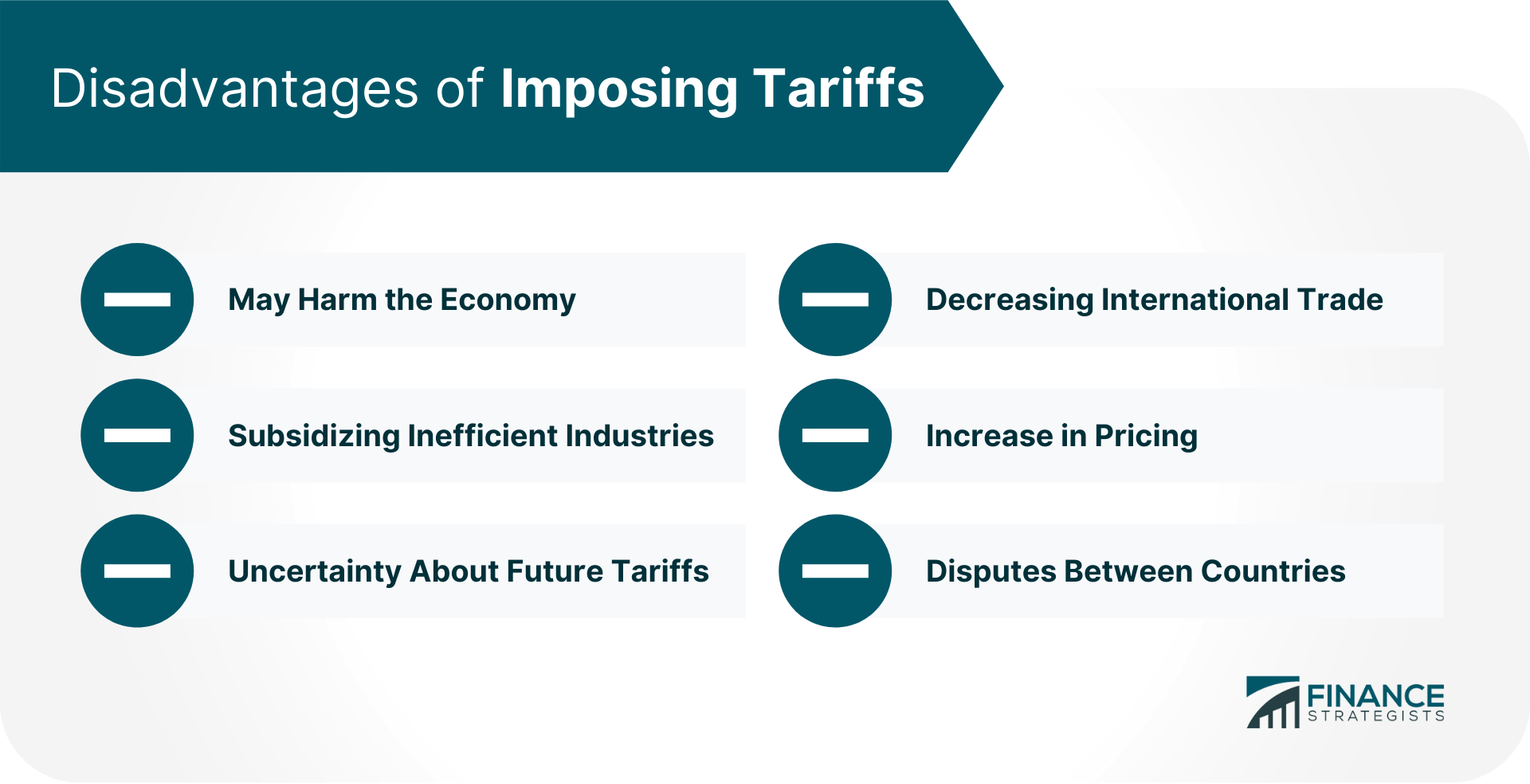 May Harm the Economy

When a country imposes tariffs on goods that can be made locally, they hurt their own economy because it means they're reducing demand for their products.

In some cases, native firms may develop native substitutes to compete with imports and export them overseas.

This helps the economy once again, but only until raw materials become too scarce and/or expensive and local production has to close or relocate elsewhere due to high costs.

The government loses the tax revenue from both imports and exports since people don't buy as much due to higher prices while foreign companies usually produce them outside the country which means the money ends up in another locality.

Another drawback is that governments typically impose tariffs to protect industries that are too small or not viable.

This can lead to firms that are inefficient and need more money from the government to stay afloat for longer periods of time which means higher taxes for everyone else.

Thus, these tariffs don't really protect domestic firms so much as they allow them to continue losing money without having to shut down until the industry is large enough again.

Some traders also worry about whether their goods will be subject to future tariff changes before it's even worth investing in certain industries since their products could become uncompetitive afterwards.

Tariffs can be a problem since they reduce international trade and make it more expensive for importers to bring goods into the country.

The impact of tariffs is greater on consumers since importers and retailers try to pass the additional costs along to them.

Reasoning behind the use of tariffs isn't always clear.

When used as a means of trade protectionism, it's easy for other countries to quarrel over them and lead to conflicts.

Tariffs can be a useful tool to increase revenue and protect domestic firms, but the drawbacks need to be considered as well.

It's better for countries to maintain mutually beneficial trading relationships with other countries so that tariffs aren't necessary and all parties benefit from simpler and cheaper trade.

What's the difference between a specific and ad valorem tariff?

A specific tariff rates a product for one price regardless of its value, while an ad valorem tariff varies according to the item's worth.

Who benefits from tariffs?

Governments impose tariffs to protect native industries until they reach a point where they can compete with foreign producers of the same items, but domestic consumers of these goods tend to bear most of the costs from them.

Why do countries impose import bans?

Countries often ban imports of certain luxury goods temporarily after which there isn't as much need for stringent protectionism due to local companies producing similar products nearby or internationally. This allows markets to open up again without having to deal with major trade disputes over tariffs.

How do tariffs affect prices?

Tariffs increase the cost of imported products while simultaneously reducing demand since consumers generally seek out less expensive versions belonging to other brands or ones produced locally.

Do all countries impose tariffs?

No. Countries may choose to impose tariffs on certain goods they produce or import instead of imposing sanctions, embargos, or boycotting them completely.