What Is a Command Economy?

A command economy is an economic system where a central authority, such as the government, plans and controls the production and distribution of goods and services. This type of economy is usually associated with countries governed by communist or socialist regimes.

Basically, the countries that apply command economies have authoritarian economic structures where political or social hierarchies are solely responsible for deciding about the economy.

These decisions are implemented by the leaders of the country and must be followed by everyone, from major players in the economy all the way down to individual laborers.

A command economy differs from a free market economy, where the pricing of goods and services is determined by the market’s chain of supply and demand.

Command economies are also known as planned economies. This is because they undergo an extensive planning process in order to achieve their economic goals.

At the end of this process, a five-year central economic plan with goals for each sector and region of the country is produced. Essential resources of the nation, such as land, labor, and capital are also allocated to align with the plan’s goals.

Then, to make sure that all entities comply with the plan, laws and regulations are put into place.

While the specific goals of each central economic plan may vary, its primary aim is to provide sufficient food, housing, and other basic needs for everyone in the country.

Characteristics of a Command Economy

A command economy has a few key characteristics, including the following:

The government creates a comprehensive economic plan covering everything from production and distribution to the consumption of goods and services. It also sets specific goals for each sector and region.

Budgeting and Allocation of Resources

The government allocates all the resources of the nation, such as land, labor, and capital to achieve the goals set in the economic plan.

It determines the required resources and distributes them according to their objectives for each sector.

The government usually owns all the key industries in a command economy, such as transportation, communication, and utilities.

For private businesses in other industries, the government makes sure that they comply with the economic plan. Thus, there is very little room or incentive for entrepreneurship and individual initiative.

Some well-known examples of command economies include Cuba, North Korea, China, and the Soviet Union.

The revolution of Fidel Castro in 1959 installed Communism and a planned economy in Cuba. It was widely criticized for stifling political and economic freedoms.

However, it did not discourage foreign countries from investing in Cuban infrastructure, agriculture, sugar trade, and tourism.

As a communist country, North Korea also has a tightly controlled command economy.

Consequently, it has brought economic problems to the country, including chronic food shortages and resource misallocation.

However, after his death, the government decided to break with its economic policies by gradually adapting free market principles and beginning trade and investment with the West. With these moves, they hoped to increase economic growth and raise the living standards of the people. Currently, the country is described as a socialist market economy due to its blend of capitalist and communist elements.

The Soviet Union established a command economy by instituting regulations, issuing directives, and setting social and economic targets. The economic development they displayed in the middle decades of the century made it appear to be a feasible economic system.

However, the system collapsed in 1991 due to several factors, which included defense spending, political policies, and economics.

Pros of a Command Economy

A command economy has a few advantages, which include the following:

With a command economy, the government can quickly mobilize resources in the most efficient way to achieve its goals.

This is because the government has all the important information about the economy. It can then make rapid decisions based on that information. For example, if needed, it can quickly increase production in a sector to achieve its targets.

Because goals are shared, all sectors work towards them in unison. There is no conflict of interest and there is generally cooperation to achieve national objectives.

No Interruption Due to Lawsuits

The government owns all the resources in a command economy, so there are no lawsuits. This eliminates the need for lengthy and costly legal procedures.

The government can decide how to use its resources through its economic plan. This helps to ensure that the resources are used efficiently and for the right purposes.

Cons of a Command Economy

A command economy also comes with several disadvantages, which include the following:

Poor Information on the Market's Needs

The government may not have accurate information on what the market needs.

This is because the top leaders who make the decisions may not be aware of the real situation of the people. As a result, the resources may not be allocated efficiently.

The government may not know nor care about what the consumers want. It produces goods and services based on its own objectives and goals.

This often leads to a mismatch between what is produced and what is actually needed by the people, resulting in economic waste.

The government may use its power to further its own political interests. This can result in economic decisions that are not in the best interests of the people.

For example, the government may choose to invest in industries that are not profitable but are politically important. This may lead to corruption, inefficiency, and a misallocation of resources.

The government determines what goods and services to produce and distribute in a command economy. However, this may not satisfy the needs and desires of consumers.

This may result in the development of a shadow economy or black market, where the consumer’s desired goods and services are sold illegally. Eventually, this may lead to economic problems because it means that the government is not collecting all the revenue it should be.

With the government controlling all aspects of the economy, there is little room and reward for innovation and competition. This is because industry leaders achieve more recognition for merely following directives from the government rather than for creating new products and solutions.

This can result in a stagnation of the economy and a lack of progress, which can be detrimental in the long run.

The command economy is diametrically opposed to the free-market economy.

With the former, the government controls all aspects of the economy and makes all the decisions.

While in the latter, the market forces of supply and demand are allowed to operate with little or no government intervention.

In a nutshell, here are some of the key differences between a command economy and a free-market economy:

Role of the Government

The main difference between a command economy and a free-market economy is the role of the government.

The government has a much larger role in a command economy and it monopolizes all the decision-making.

In a free-market economy, the government is only involved in providing basic services and addressing problems associated with market failure.

Meanwhile, in a free-market economy, the focus is on profitability which drives innovation and competition among businesses.

Prices of Goods and Services

A central authority decides how the resources are allocated in a command economy based on previously set goals and objectives.

In contrast, the allocation of resources in a free-market economy is based on the market forces of supply and demand.

This may lead to an unequal distribution of resources because the purchasing power of consumers heavily influences what products and services they can acquire.

The preferences of consumers are not taken into account in a command economy because the government decides what to produce and how to produce it.

Conversely, the preferences of consumers are always taken into account in a free-market economy because businesses make profits by selling products that consumers demand.

There is often more economic equity in a free-market economy because people have more freedom to choose how they will utilize their resources and capabilities.

It is difficult to have economic equity in a command economy since the government decides how the resources are to be utilized and distributed.

Here is a summary presenting the differences between a command economy and a free-market economy: 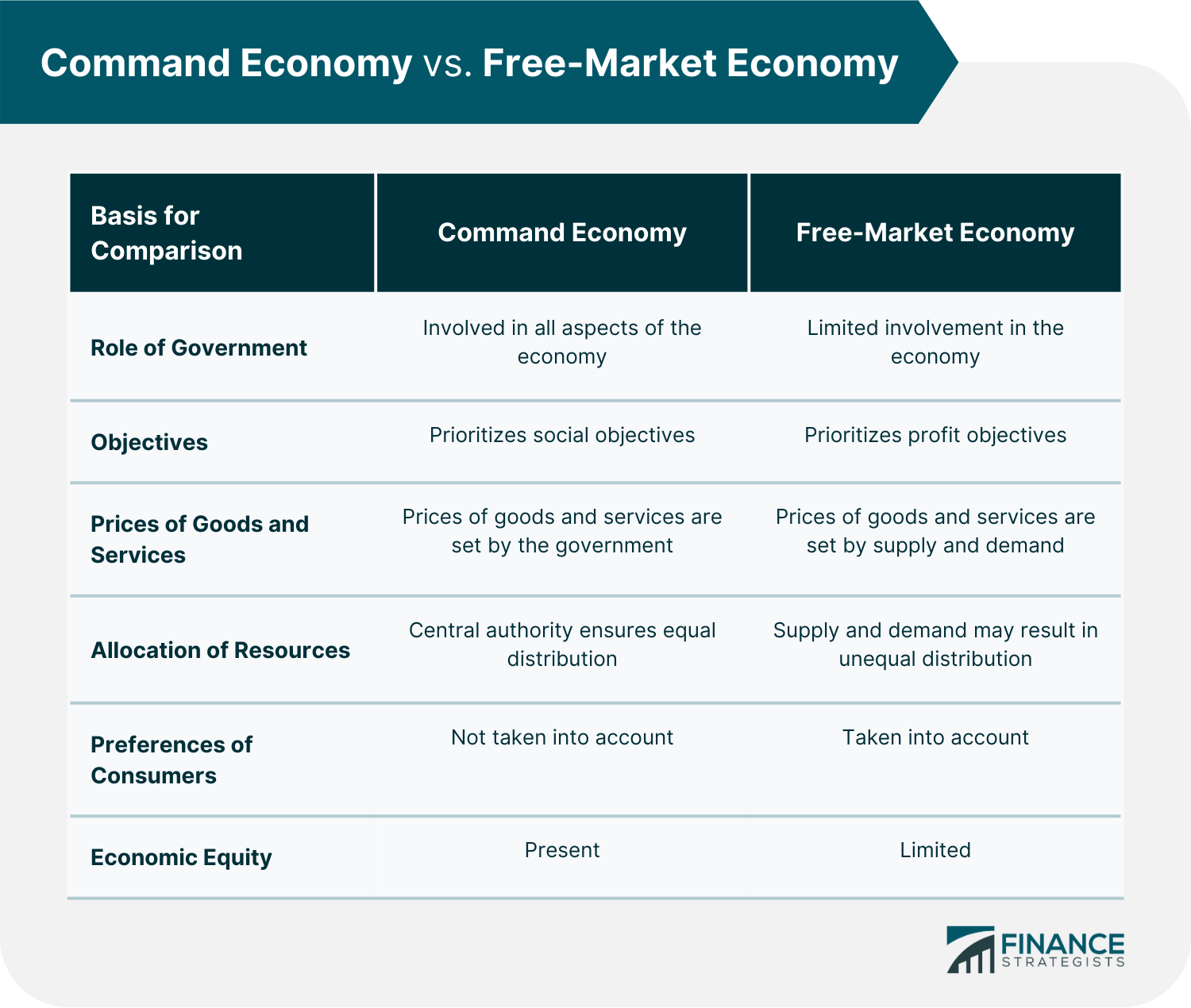 Command economies have existed in various forms throughout history and continue to exist in some countries today.

They can have some advantages, but they also have many drawbacks. The most significant of which is that it stifles innovation and creativity because the government leaves no room for competition.

However, a major advantage of a command economy is that it can be more efficient in the allocation of resources.

Over-all, command economies and free-market economies have their respective advantages and disadvantages. Therefore, it is up to the government of each country to decide which system is best for its people and its economy.

What is the main idea of a command economy?

The main idea of a command economy is that the government controls all major aspects of the economy and makes all decisions about production and distribution. It is also known as a centrally planned economy.

How does central planning work in a command economy?

Central planning in a command economy means that the government creates a plan for the allocation of resources and production, which must be followed by both businesses and consumers.

What is the difference between a command economy and a mixed market economy?

A command economy is one in which the government centrally plans and controls all economic activity. In a mixed market economy, some elements of both free markets and government control co-exist.

Who makes the decisions in a command economy?

The government does. Command economies are those in which the government makes the majority of economic decisions.

How do command economies control surplus production and unemployment rates?

Overproduction is not possible in a strictly government-controlled economy because price mechanisms and production quotas exist. Command economies also do not have unemployment because the government often assigns jobs, and labor participation may be compelled.