What Is Per Stirpes?

Per stirpes is a legal term used in the law governing inheritance and estate.

It is a designation that decrees how the assets of a testator (person making the will) will be distributed when a beneficiary passes away ahead of him. In such a case, his share will be equally divided among his heirs, usually children.

Per stirpes, as applied in drafting a last will and testament, is the focus of this article.

How Does Per Stirpes Work?

Per stirpes has a Latin origin translated as “by roots” or “by branch.”

It states how your inheritance will be divided if one of your named beneficiaries dies ahead of you.

Per stirpes defines an equal asset distribution for each “branch” of a family tree. Children of the deceased beneficiary may represent their parents. Spouses, however, are not considered in a per stirpes distribution.

Here is a sample application of per stirpes:

“I give to my daughter, Grace Anne, one-half of my estate. If Grace Anne does not survive me, this inheritance should be distributed to her descendants, per stirpes.”

Here is a sample scenario to illustrate the application of per stirpes in a will.

George, the testator, has three children: Grace Anne, Gabrielle, and Genesis. He assigns his assets to each of them in equal shares, per stirpes. Grace Anne has two children: Baron and Chris. Gabrielle has a son, Dan. Genesis, Baron, Chris, and Dan do not have children. 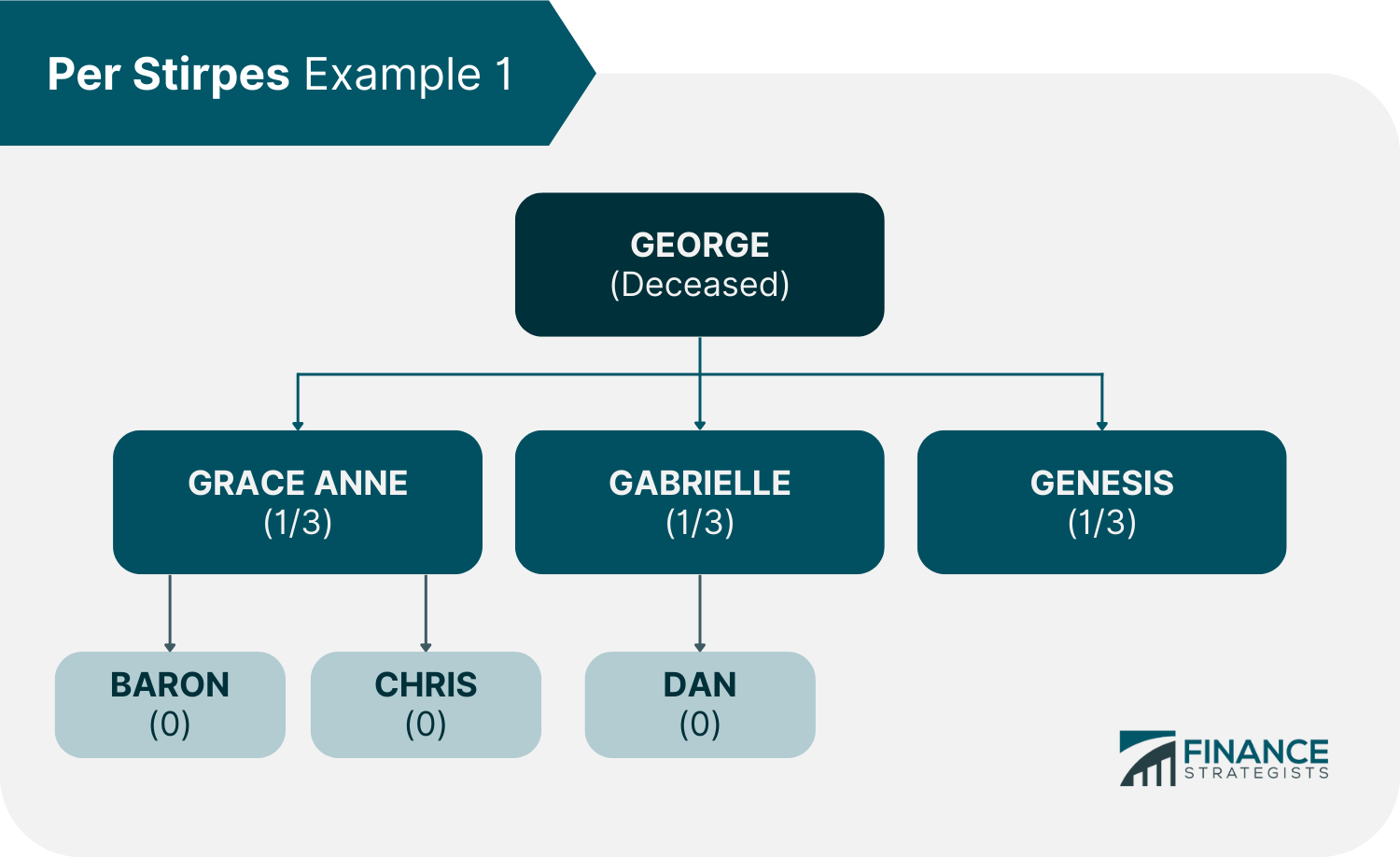 Genesis dies ahead of his father, George. Grace Anne and Gabrielle will each receive one-half of George’s estate. Since Genesis has no descendants, there is no need to create a share for him. Baron, Chris, and Dan would not have direct shares of George’s estate. 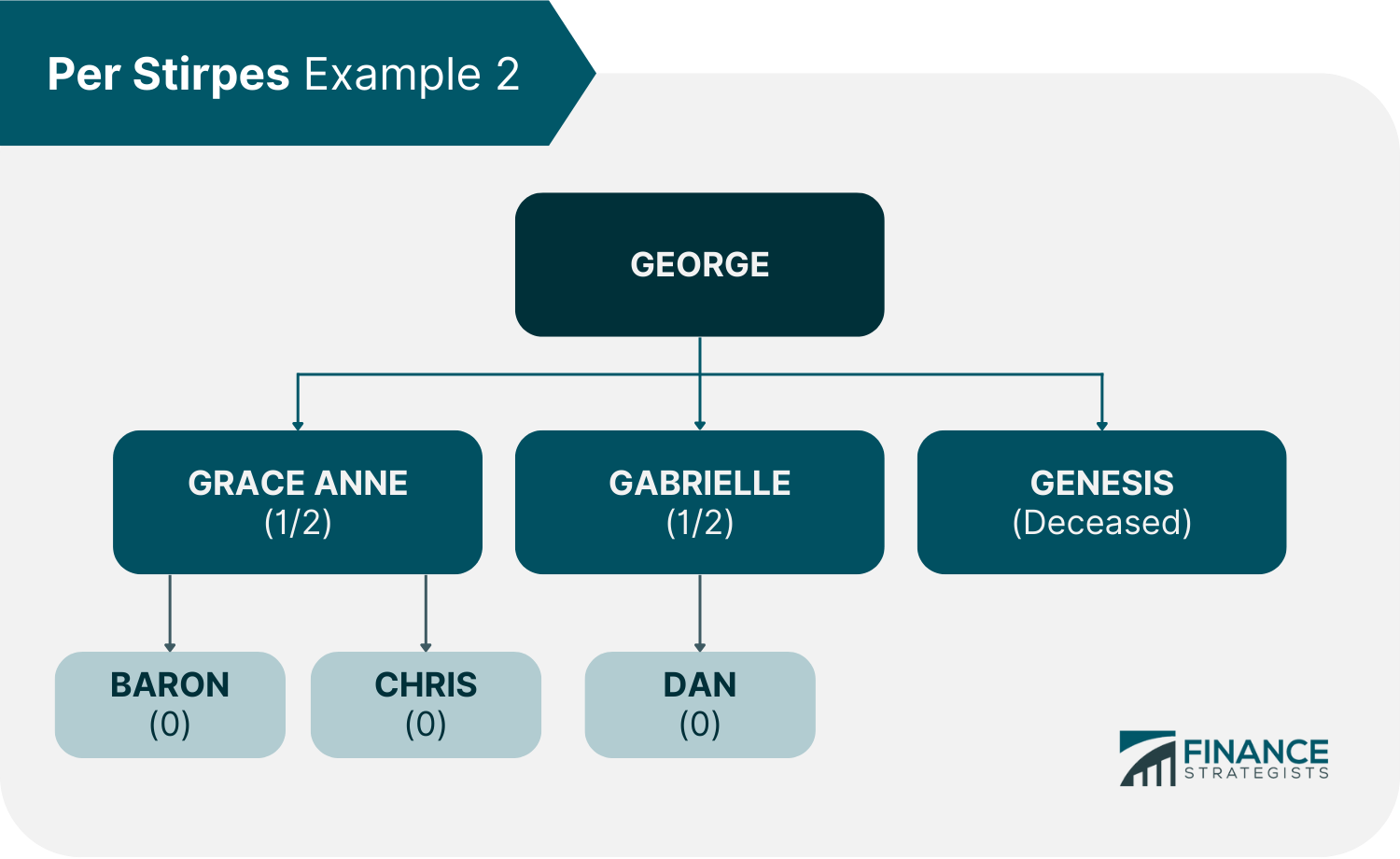 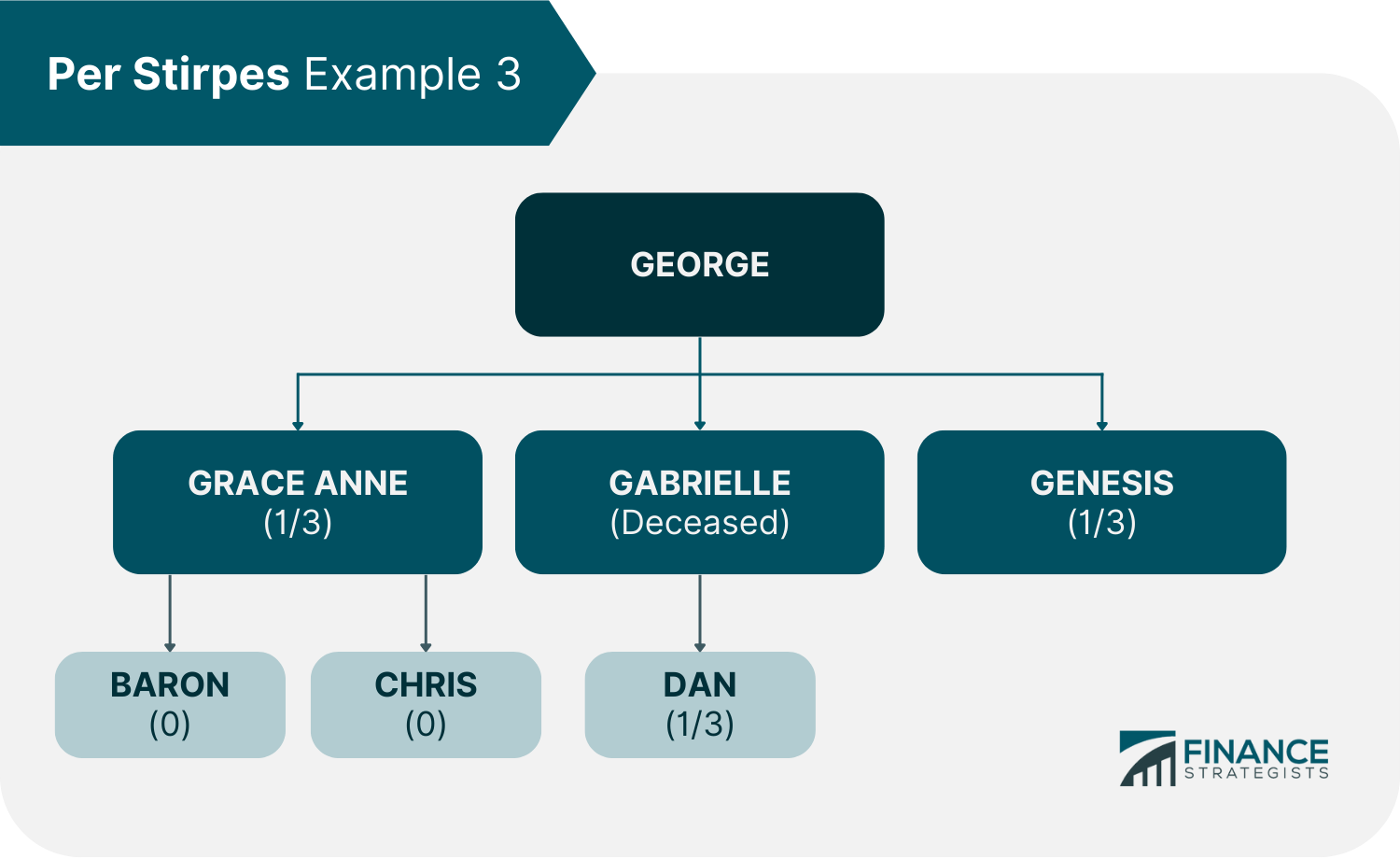 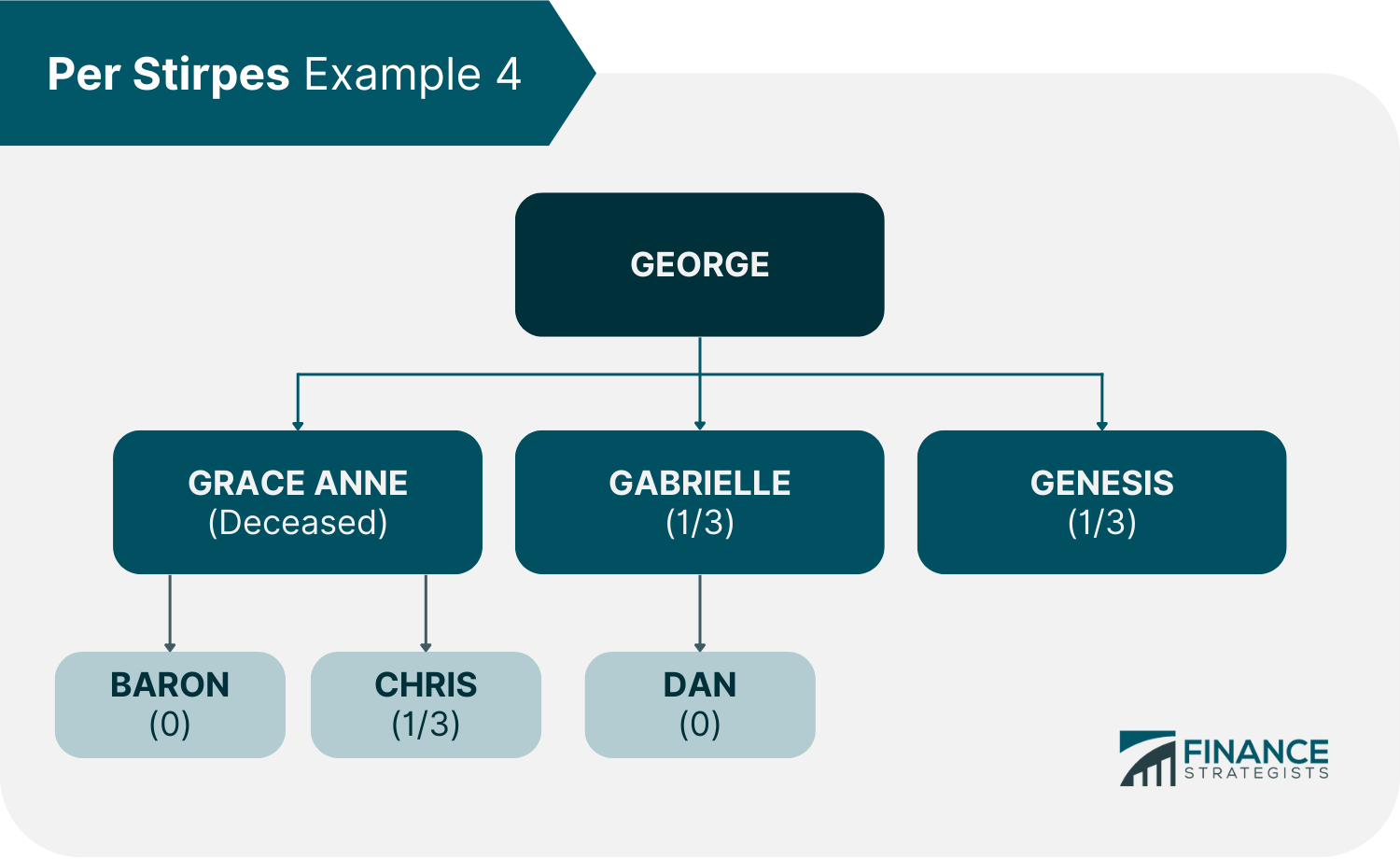 Importance of Per Stirpes

Using per stirpes distribution in your will can simplify your estate planning process. It ensures clarity in the distribution of your inheritance should one of your primary beneficiaries pass away ahead of you.

You do not have to go through naming secondary succession for every possible scenario. Per stirpes designation will execute it for you.

Per Stirpes vs Per Capita

Another designation option is using per capita. Per capita means “by heads.” This method shares the assets equally among surviving descendants in the same generation nearest the testator.

The shares of the predeceased return to the estate unless the testator specifies that children and grandchildren are equal descendants in his will.

Refer back to Sample Scenario above. If Grace Anne dies ahead of George, per capita designation would mean that Gabrielle and Genesis each inherit one-half of George’s estate.

Baron and Chris would not receive anything unless George specified that children and grandchildren are equal descendants in his will.

With the per capita designation, the testator can specify if his assets will be distributed to his children, grandchildren, or both. Applying this to the sample scenario, Baron, Chris, Gabrielle, and Genesis would each receive one-quarter of the assets.

Eventually, the testator's decision about the family dynamics and his fondness for family members will help determine whether to use the per stirpes or per capita designation on his will.

Leaving a legacy is an opportunity to make an impact that will last long after you die. It allows you to bless your heirs, children, grandchildren, or chosen beneficiaries with the wealth you have earned throughout your lifetime.

In organizing your will, it is essential to be clear about your intentions. Be specific in communicating your wishes. Whether you choose per stirpes or per capita, consider the long-term consequences of this decision to those you leave behind.

A comprehensive last will benefits your beneficiaries by ensuring an orderly distribution of assets. Furthermore, it conveys a legacy of commitment, preparation, and generosity to the very end.

What happens with per stirpes if there are no descendants?

If a beneficiary with no descendants dies ahead of the testator, his share of the inheritance will be split equally between the surviving beneficiaries.

What is the importance of per stirpes?

Using per stirpes distribution in your will ensures clarity in the distribution of your inheritance should one of your primary beneficiaries pass away ahead of you. You do not need to name secondary succession for every possible scenario.

What is the difference between per stirpes and per capita?

Per stirpes defines an equal asset distribution for each “branch” of a family tree. Children of the deceased beneficiary may represent their parents. On the other hand, per capita shares the assets equally among surviving descendants in the same generation nearest the testator. Next in-line generation descendants may inherit shares only if stipulated in the will.

Is per stirpes a good idea?

Is a spouse included in per stirpes?

Spouses are not considered in per stirpes distribution; only family members within the “branch” of succession.