Money invested in a 529 plan grows in a tax-deferred manner. Withdrawals from 529 plans for qualified education expenses are not taxed. 529 Plans are named after the Section 529 of the IRS tax code that created the tax exemption associated with these plans.

Prepaid Tuition Plans enable you to buy units or credits at a public university or state college at prevailing fees.

Education Savings Plans provide income for education at any institution within the United States or in certain jurisdictions abroad. The advantages of 529 plans include:

Jump to explanation of advantages The disadvantages of 529 plans include:

Jump to explanation of disadvantages

The first iteration of 529 plans was a prepaid college tuition plan introduced by the Michigan Education Trust (MET) in 1986.

In 1994, MET’s plan was declared tax-exempt by the Sixth Circuit Court of Appeals.  All college tuition prepaid plans and savings plans became exempt from federal taxes in 1996 after U.S. Senator Bob Graham of Florida and Senator Mitch McConnell of Kentucky led a bipartisan effort for the initiative.

A 529 plan works in the same manner as other savings plans.

You, or a pool of investors that includes relatives and friends, can deposit money into a 529 account with a provider, either in your name or a beneficiary’s name.  Thanks to investment products available in the account, the money grows on a tax-deferred basis until it is withdrawn for qualified education expenses.

529 plans can also be rolled over between beneficiaries or transferred between family members. For example, if the intended beneficiary wins a scholarship, then the 529 plan can be rolled over to his or her younger brother or sister.

Only one rollover is allowed per year. Premature withdrawal of money held in a 529 plan incurs a 10% penalty and income tax at prevailing tax rates.

The same rule applies for money that is not used towards education expenses.  Exceptions are made in the penalty, if the beneficiary receives a scholarship or is admitted to a US military academy.

Expenses covered under your 529 plan are known as “qualified expenses.” The nature of these expenses differs based on the type of 529 plan, providers, and state laws. In general, however, money from a 529 plan can be used to cover any major secondary education expense. These can include:

Some off campus expenses can be covered under a 529 plan. According to Merrill Edge:

For students living off campus, rent, utilities and food not purchased directly from the college or university may qualify, if those expenses do not exceed the allowance for room and board, as included in that institution's cost of attendance.

Some expenses that are not covered under a 529 plan include:

529 plans can be used to pay tuition at a wide variety of institutions including:

Certain providers and states also allow beneficiaries to use up to $10,000 from their 529 plans to pay fees at private, public, or K-12 schools. You can also use a cumulative amount of $10,000 from your 529 plan to repay your student debt.

The annual contribution limits for 529 plans are fairly high.

Multiple individuals can contribute to a 529 plan, and the beneficiary can also contribute part or all of their income to the account. The contributions can be on a periodic basis or as a lump-sum, provided that the contributor adheres to the $15,000 limit for gift contributions.

Prepaid tuition plans are not available for K-12 education.  There are restrictions on how the money held in these accounts is spent. For example, it cannot be used for room and board. Due to the geographic and spending restrictions in such plans, their popularity has waned over the years. 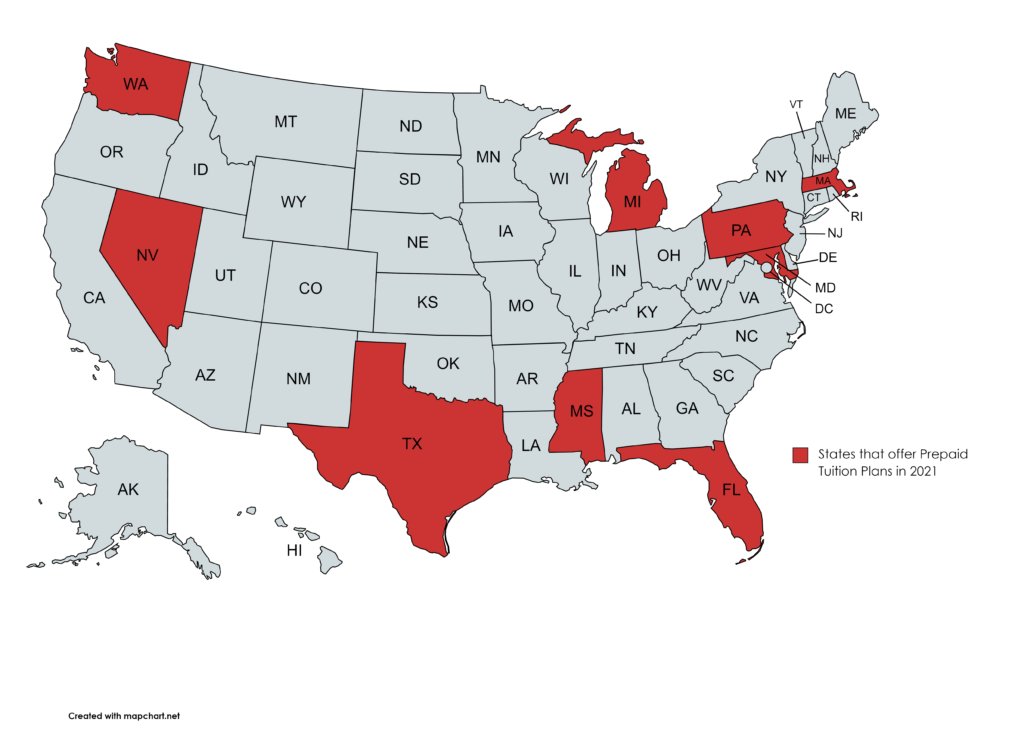 Only nine states offered prepaid tuition plans as of 2021. These states are:

With the exception of Massachusetts, other public universities and state colleges are included in prepaid tuition plans for other states.

The main difference between prepaid tuition plans and Education Savings Plans (ESPs) is that the latter can be used at any college or university. They do not have state residency requirements and, therefore, broaden the number of choices available to students.

Certain ESPs are time-based and specify a target date for college.  The target date accounts generally follow a strategy of front-loading investments on risk during the initial years to drive growth. In the later years, the strategy shifts to making more conservative, income-related investments.

Advantages and Disadvantages of 529 Plans

Education is one of the biggest expenses in life and planning for it can be cumbersome. 529 plans offer a potential solution to the problem. As with any other savings plan, however, they have their advantages and disadvantages.

The Advantages of 529 Plans

Anyone over the age of 18 can open a 529 plan for themselves or a beneficiary. Thus, parents can plan well-ahead, even during pregnancy, for their child’s education expenses.

Such plans also allow more people, including friends and well-wishers of the beneficiary, to contribute towards his or her education.  Finally, the ability to rollover 529 plans to another beneficiary or other 529 plans adds to their flexibility.

As with other savings plans, money in a 529 plan grows in a tax-deferred manner. Income generated from capital gains of investments in the account is not taxed at the time.

Withdrawals from 529 plans are also tax-free, if the money is used for qualified education expenses.

As mentioned earlier, it is possible to sock away more income towards future college expenses using 529 plans as compared to other savings instruments. Contribution limits range anywhere from $235,000 to $520,000 per year.

529 plans like the prepaid tuition plan offer you the option to lock-in cheaper prices on credits by buying them now.  According to research, fees at private and public universities have increased by 144% and 165% respectively in the last 25 years. 529 plans can help avoid such extreme inflation. 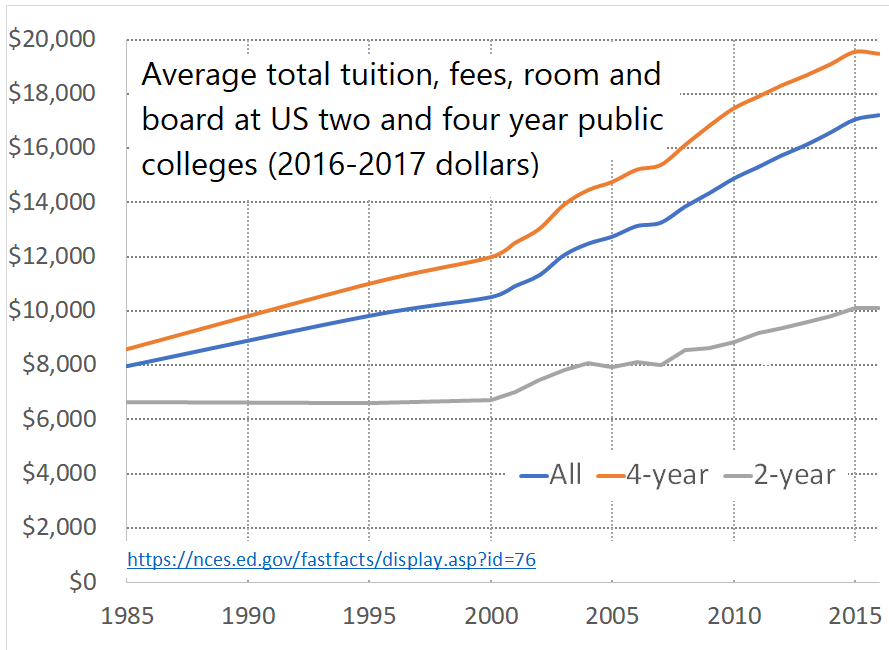 The Disadvantages of 529 Plans

Certain 529 plans, such as those for prepaid tuition, can limit the choices of educational institutions available to students by geography or type.

529 plans can potentially decrease the amount of aid that may be available to students from FAFSA.  After the first $10,000, the Free Application for Federal Student Aid (FAFSA) system deducts 5.64% of an asset’s value from parent or beneficiary 529 asset accounts.  Therefore, the value of expected family contributions will increase.

Like other savings plans, there are costs associated with administration, investment management fees, and services for 529 plans. These costs can add up over time and make such accounts, especially for those with low amounts, not worth the cost.

529 plans are savings plans for colleges, vocational, and religious schools that also provide tax advantages. Money invested in a 529 plan grows in a tax-deferred manner. Withdrawals from 529 plans for qualified education expenses are not taxed.

529 plans can potentially decrease the amount of aid that may be available to students from other sources. After the first $10,000, the Free Application for Federal Student Aid (FAFSA) system deducts 5.64% of an asset’s value from parent or beneficiary 529 accounts. Therefore, the value of expected family contributions in a FAFSA system will increase.

The nature of expenses included in 529 plans differs based on the type of plan, providers, and state laws. In general, however, they include things like room and board, tuition, and equipment costs.

Certain 529 plans, such as those for prepaid tuition, can limit the choices of educational institutions available to students by geography or type. For example, prepaid tuition plans mostly restrict choice to public universities and state colleges.

What is the 529 Plan annual contribution limit?

It is possible to sock away more income towards future college expenses using 529 plans as compared to other savings instruments. Contribution limits range anywhere from $235,000 to $520,000 per year.