In the annuity method of assets depreciation, it is supposed that the money invested in the purchase of the asset earns interest at a fixed rate.

This is debited to the asset account and, according to the annuity table, a certain fixed amount of depreciation is charged everywhere for the estimated useful life of the asset.

The amount of depreciation calculated by the annuity table at a given rate of interest includes the element of interest. It remains the same throughout the life of the asset, while interest taken forward will decrease in the coming years.

The method is based on a comprehensive interpretation of the term “cost of the asset.” An asset’s cost is defined as its purchase price plus the interest on the capital investment in the asset that would have been earned on the amount invested.

1. Use of Interest: Unlike the traditional methods of providing depreciation, the annuity method considers interest on capital invested in the asset. 2. Exact and Suitable Method: It is regarded as the most exact and precise method from the point of view of calculations. 3. Scientific Method: The method is the most scientific because it takes interest into consideration.

Demerits of the Annuity Method

1. Too Many Calculations: It depends on a number of complex calculations. 2. Not Suitable for Addition in Between: If the asset requires frequent additions and extensions, the calculations must be revised quite substantially after further complicating its application and operation. 3. Fixed Amount of Depreciation: Has the tendency to unequally charge to profit and loss account in respect of depreciation and repairs combined, which is because the amount of depreciation remains fixed over the period of the life of the asset.

Application of the Annuity Method of Assets Depreciation 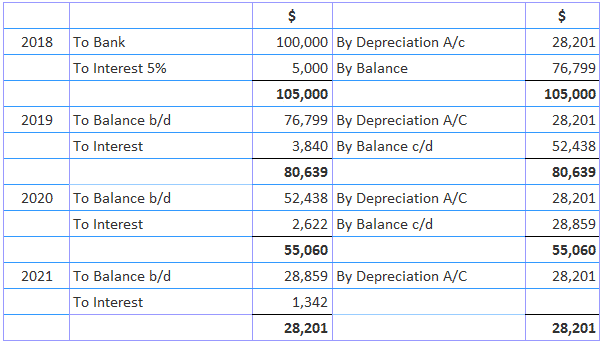 An asset should be considered for Depreciation even when its value has not yet reached $100.

The useful life of an asset should not exceed 50 years in order to avoid any complications and difficulties in making future calculations.

A positive quantity signifies an excess over one year and a negative quantity represents the part of the amount that does not sustain for more than one year.

The annuity method uses interest rates to derive the Depreciation and takes interest on the capital invested in an asset.

The straight line method is preferred when there is no specific time period for which a certain small amount has to be depreciated. Also, it does not take into account any interest for capital invested in an asset.