What Are Current Assets?

Current assets include, but are not limited to, cash, cash equivalents, accounts receivable, and inventory.

Current assets reveal the ability of a company to pay its short-term liabilities and fund its day-to-day operations.

Current assets are typically listed in the balance sheet in the order of liquidity or how quick and easy it is to turn them into cash. They are arranged from the most liquid, which is the easiest to convert into cash, into the least liquid, which takes the most time to turn into cash.

To determine the total current assets, assets under this category are summed up using the formula below: 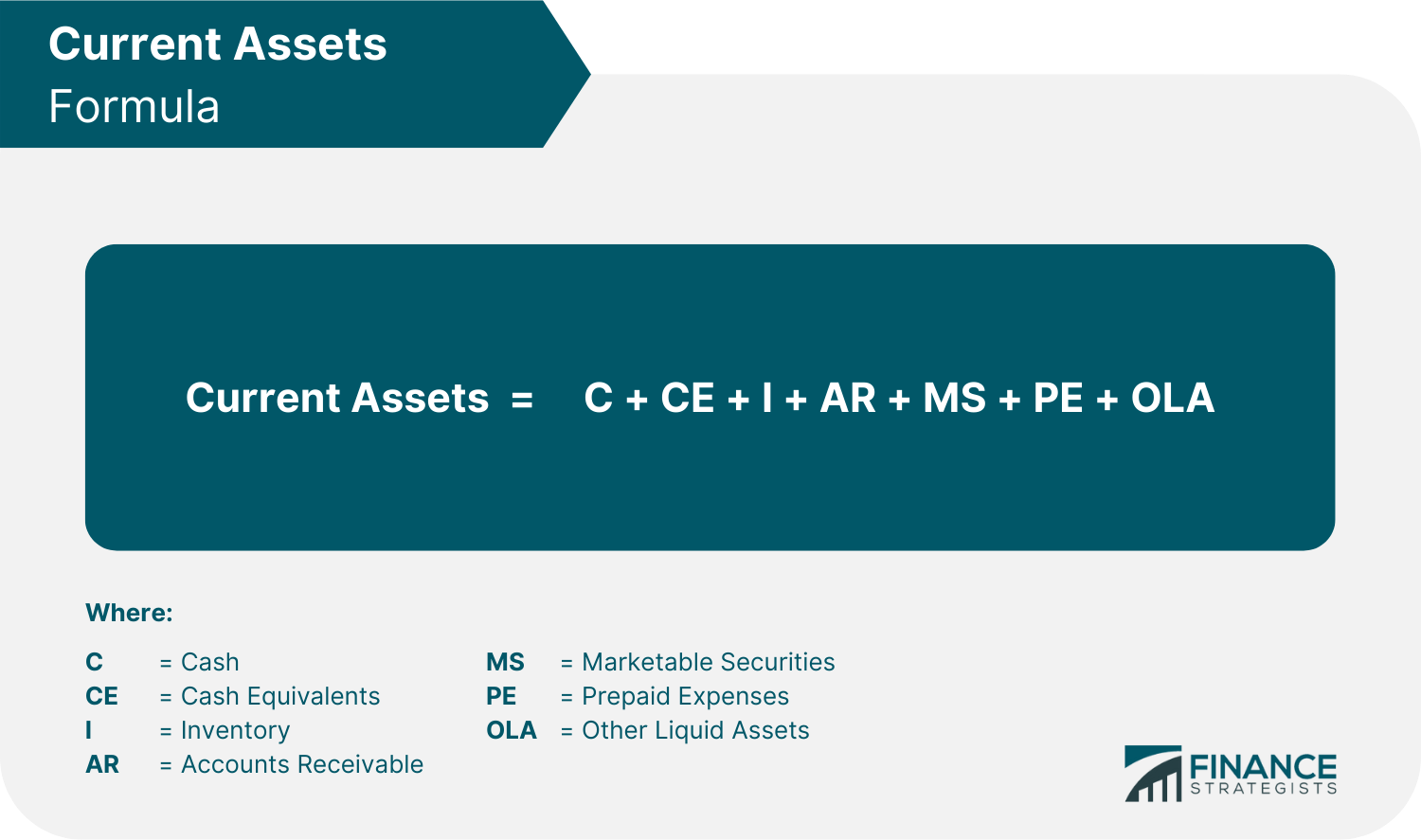 This is the most liquid form of current asset, which includes cash on hand, as well as checking or savings accounts. It also covers all other forms of currency that can be easily withdrawn and turned into physical cash. It is spendable and requires no conversion.

Inventory items are considered current assets when a business plans to sell them for profit within twelve months.

These can include raw materials, merchandise, work-in-progress, and finished products. When items have a history of being sold to consumers quickly, they are also referred to as fast-moving consumer goods (FMCGs).

The value of these items are summed up and listed on the balance sheet under the inventory category.

Accounts receivables are any amount of money customers owe for purchases of goods or services made on credit. These outstanding customer balances are expected to be received within one year.

Marketable securities are short-term liquid securities that can be quickly sold on a public stock or bond exchange without any loss in their value.

Prepaid expenses are advance payments made for goods or services to be received in the future. This includes leased office equipment or insurance coverage.

Although prepaid expenses are not technically liquid, they are listed under current assets because they free up capital for future use.

Prepaid expenses are first recorded as current assets on the balance sheet. Then, when the benefits of these assets are realized over time, the amount is then recorded as an expense.

Other liquid assets include any other assets which can be converted into cash within a year but cannot be classified under the above components.

These may also include assets that are not intended for sale, such as office supplies.

Since this may vary per company, details about these other liquid assets are generally provided in the notes to financial statements.

Below is a consolidated balance sheet of Nike, Inc for the period ending May 31, 2022. 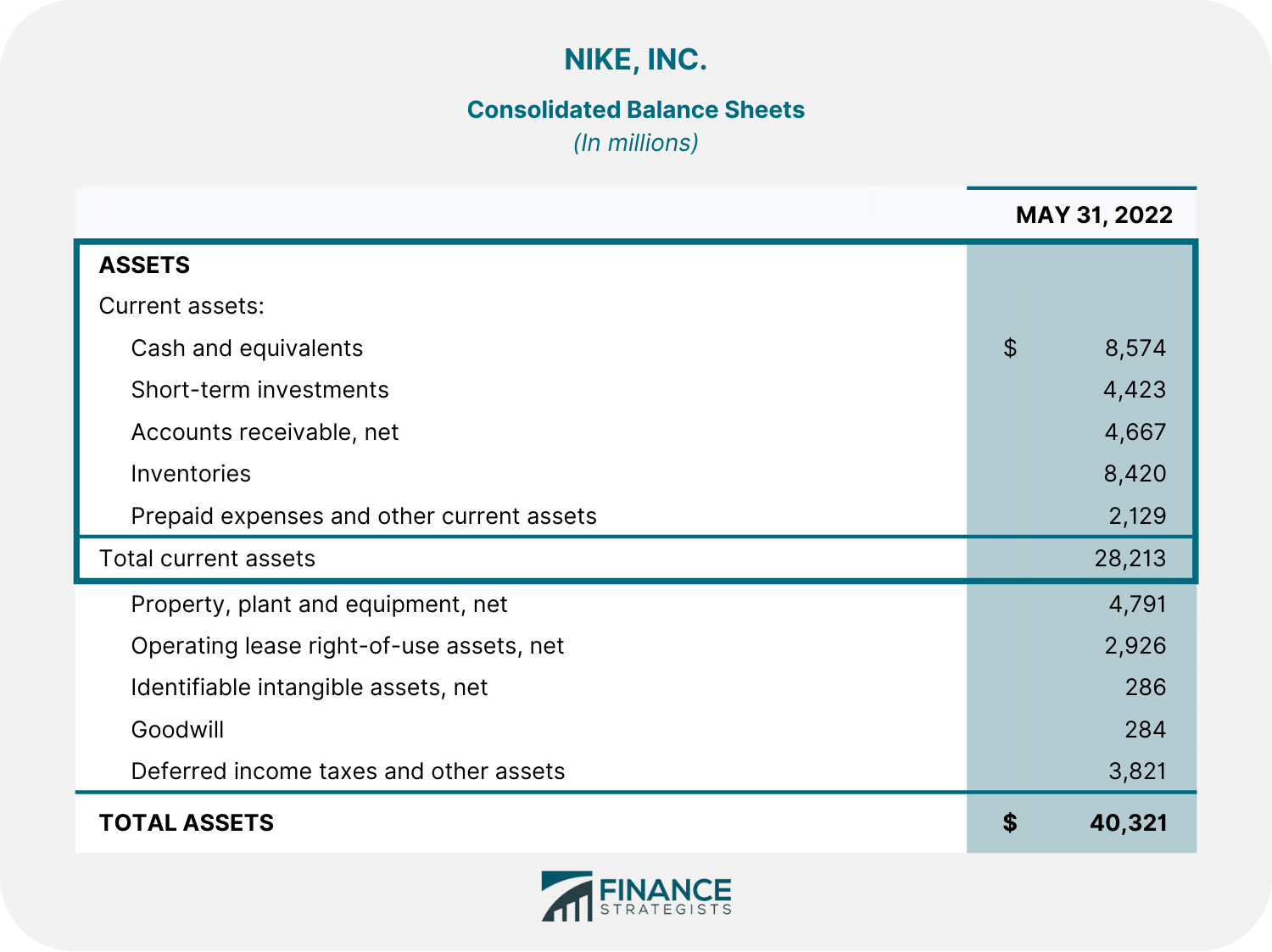 There are several ways businesses use current assets. The most common ways are to:

Current assets are used to finance the day-to-day operations of a company. This includes salaries, inventory purchases, rent, and other operational expenses.

Knowledge about current assets helps in the management of working capital, which is the difference between the current assets and current liabilities of a company.

When the working capital is managed well, it can help the business increase its profits, value appreciation, and liquidity.

If needed, a company can increase its working capital in several ways. Among other things, it can improve inventory management, negotiate better payment terms with suppliers, or establish a penalty for late payments.

Liquidity ratios provide important insights into the financial health of a company.

Current assets play a big role in determining some of these ratios, such as the current ratio, cash ratio, and quick ratio.

Ratios That Use Current Assets

Several ratios use current assets as part of their calculation. Some of the most common ones are:

The cash ratio indicates the capacity of a company to repay its short-term obligations with its cash or near-cash resources.

As shown in the formula below, it is calculated by dividing cash and cash equivalents by current liabilities. 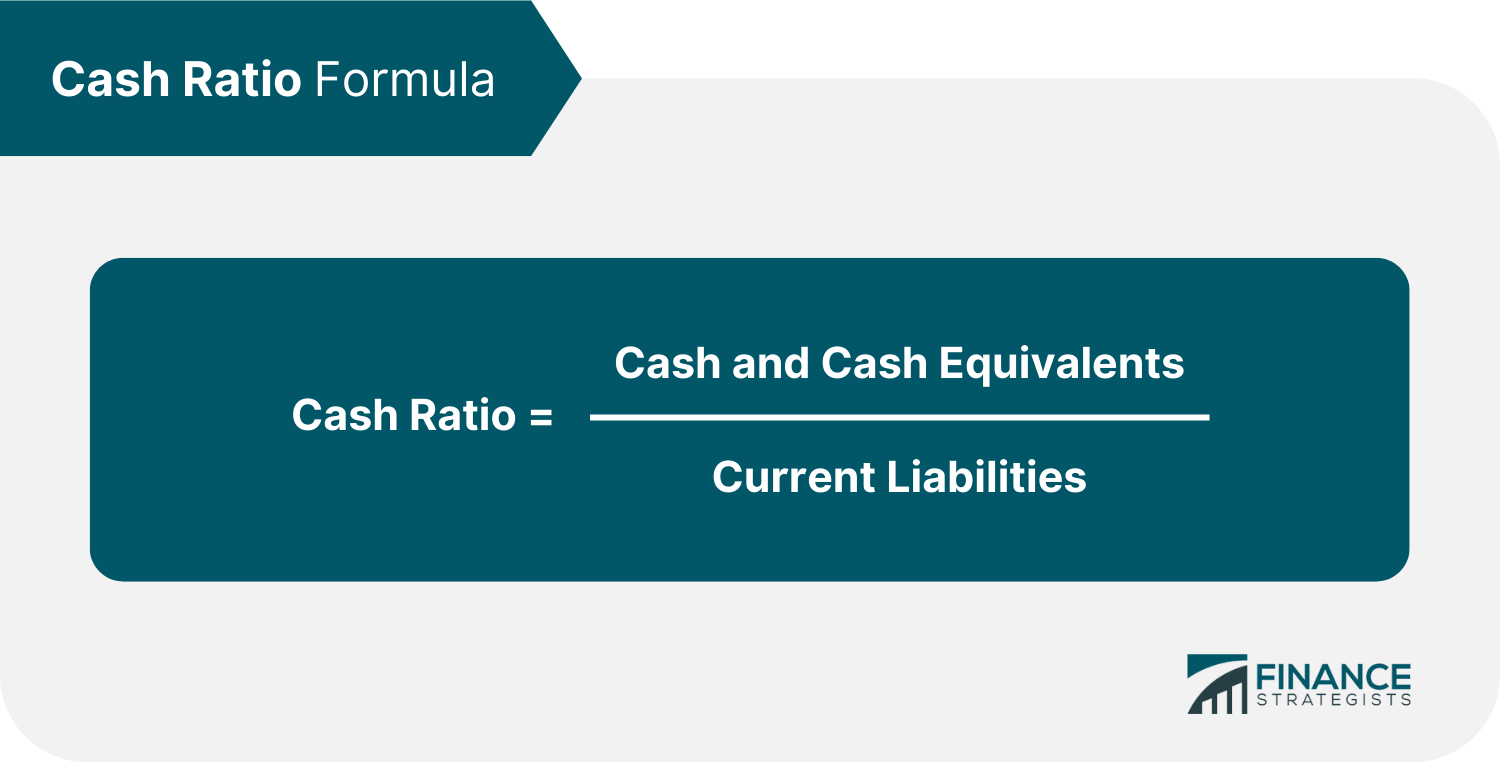 Similar to the example shown above, if the cash ratio is 1 or more, the company can easily meet its current liabilities at any time.

On the other hand, if the cash ratio is lower than 1, the company has insufficient cash to pay off its short-term debts.

A low cash ratio is not necessarily bad because there might be situations that skew the balance sheets of a company. This can include long credit terms with its suppliers or very little credit extended to its customers.

The cash ratio is a more conservative and rigorous test of a company’s liquidity since it does not include other current assets.

The quick ratio evaluates a company’s capacity to pay its short-term debt obligations through its most liquid or easily convertible assets.

The assets included in this metric are known as “quick” assets because they can be converted quickly into cash.

Unlike the cash ratio, it does not just consider cash and its equivalents but also includes accounts receivable and marketable securities.

The quick ratio is computed using the formula below. 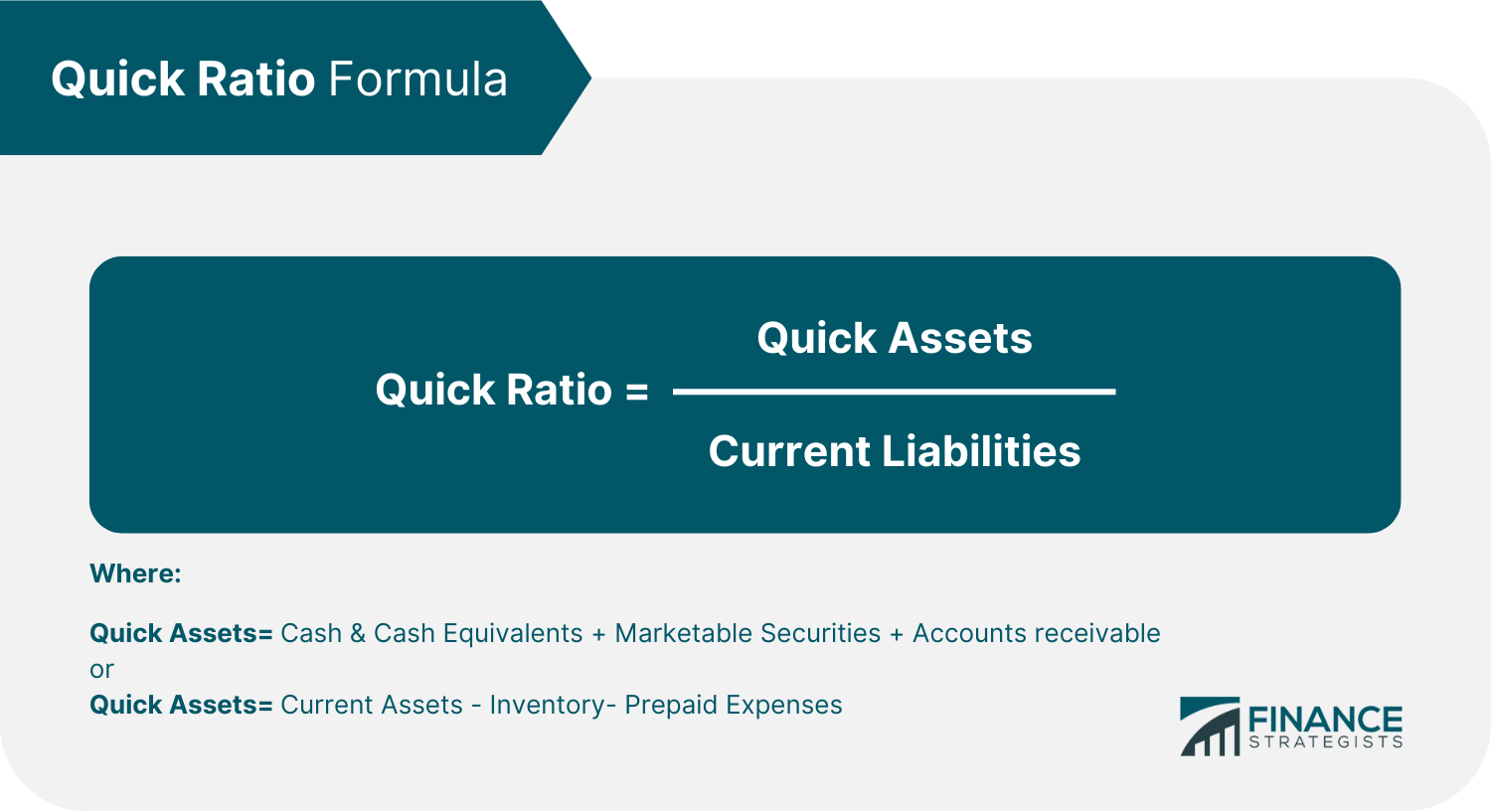 The current ratio evaluates the capacity of a company to pay its debt obligations using all of its current assets. Unlike the cash ratio and quick ratio, it does not exclude any component of the current assets.

Thus, the current ratio is computed in the following way: 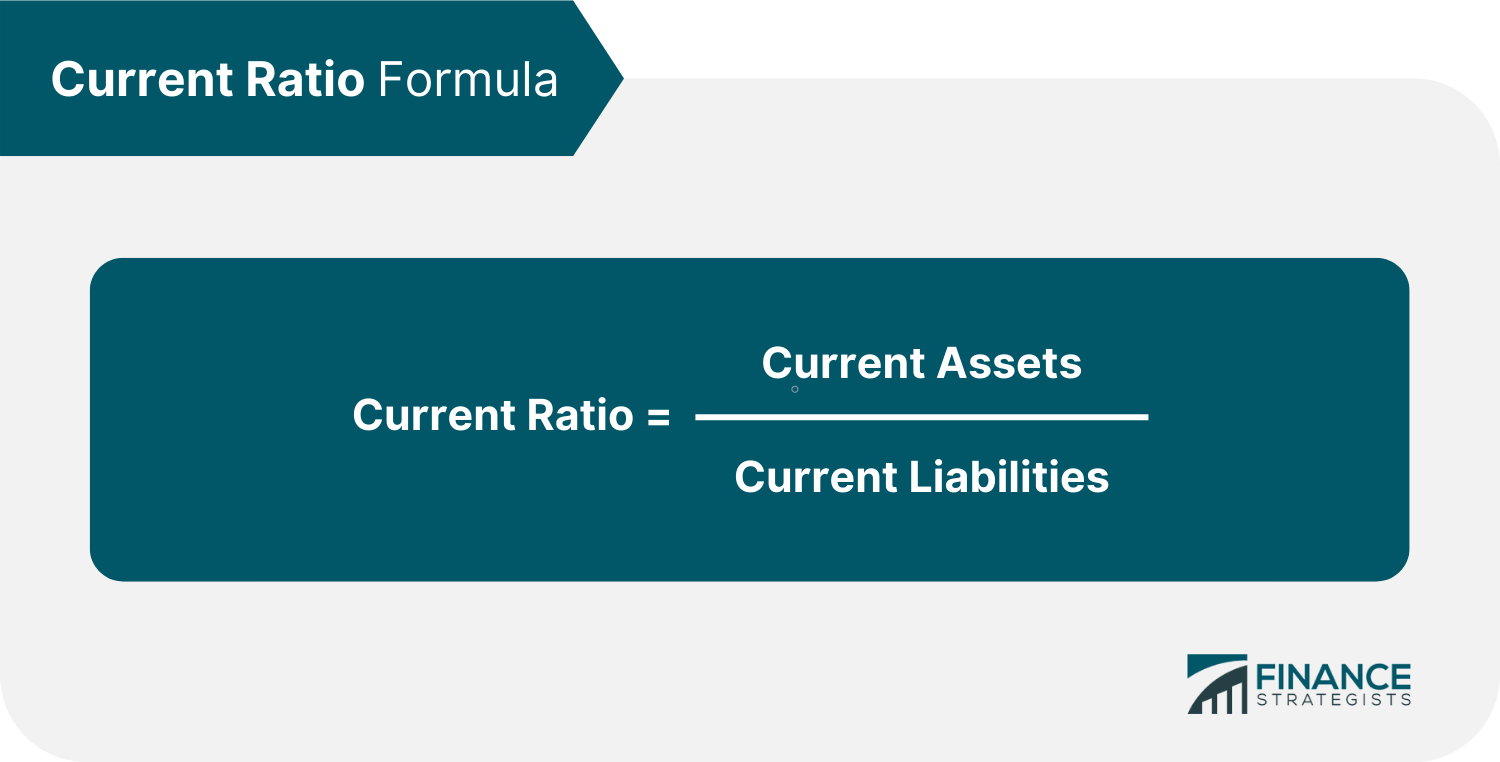 Conversely, when the current ratio is more than 1, the company can easily pay its obligations and debts because there are more current assets available for use.

On the other hand, investors and analysts may also view companies with extremely high current ratios negatively because this could also mean their assets are not being used efficiently.

Current assets are more short-term assets that can be converted into cash within one year from the balance sheet date.

Current assets usually appear in the first section of the balance sheet and are often explicitly labelled. Within this section, line items are arranged based on their liquidity or how easily and quickly they can be converted into cash.

Noncurrent assets, on the other hand, are more long-term assets that are not expected to be converted into cash within a year from the date on the balance sheet.

The most common noncurrent assets are property, plant, and equipment (PP&E), intangible assets, and goodwill. 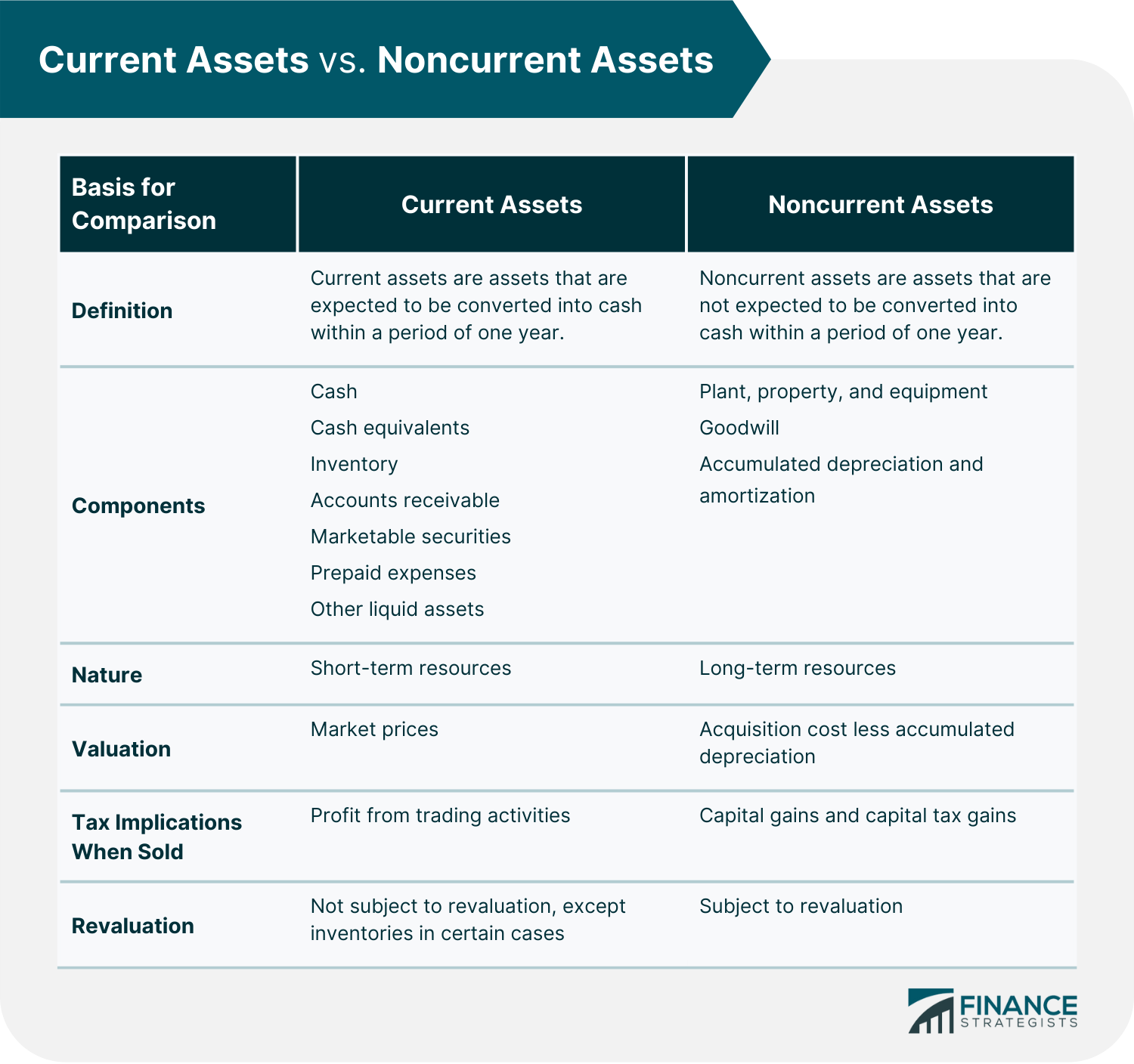 Current assets are assets that can be quickly converted into cash within one year. These assets, once converted, can be used to fulfill current liabilities if needed.

The key components of current assets are cash and cash equivalents, marketable securities, accounts receivable, inventory, prepaid expenses, and other liquid assets. It excludes noncurrent assets such as property, plant, and equipment, intangible assets, and goodwill.

Current assets indicate a company’s ability to pay its short-term obligations. They are an important factor in liquidity ratios, such as the quick ratio, cash ratio, and current ratio.

Why are current assets referred to as "current"?

Current assets are referred to as current because they are either cash or can be converted into cash within one year.

What is the difference between current and fixed or noncurrent assets?

Is a loan a current asset?

What is the formula to calculate current assets?