If a fixed asset is sold or disposed of, several accounting entries are made to record the relevant transactions.

First, a new account called the disposal of fixed assets account is opened. In turn, the cost of the fixed asset being disposed of is transferred to this account.

This occurs by debiting the disposal of fixed assets account and crediting the relevant fixed asset account with the cost of the asset being disposed of.

It is generally not considered advisable to provide any depreciation for the year of disposal. Hence, the amount transferred to the disposal of fixed assets account is the accumulated depreciation at the end of the previous accounting period.

The effect of the first two entries is that the cost and accumulated depreciation are removed from the normal accounts. Also, the disposal of fixed assets account now shows the book value of the item to be disposed of.

If the asset is sold for cash, the cash or bank account is debited and the disposal of fixed assets account is credited with the amount actually received on the sale of the asset.

If the asset is traded in, sold on credit, or destroyed (and an insurance claim is made), the account of the supplier of the new machine, the debtor, or the insurance company is debited. Also, the disposal of fixed assets account is credited with the agreed value of the item.

Like all expense accounts, this debit balance should be transferred to the debit of profit and loss account at the end of the year.

If, on the other hand, the disposal of fixed assets account shows a credit balance, this denotes a gain or profit on the sale of the fixed asset.

This should be credited to the profit and loss account as an ancillary income (also known as other income or non-operating income) at the end of the year. 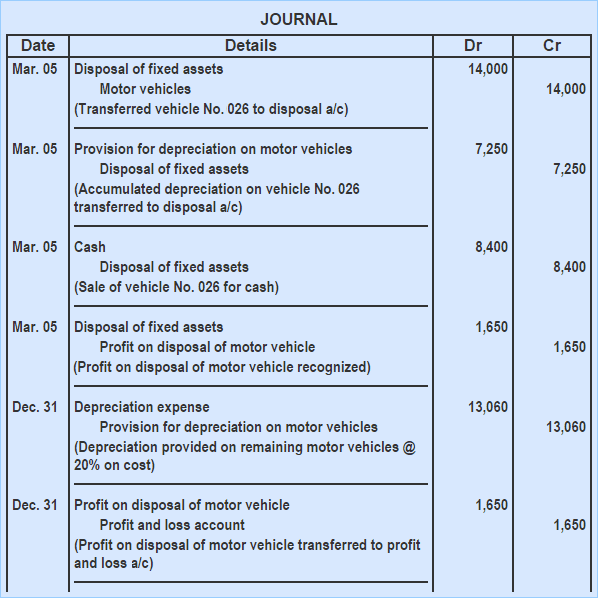 Some businesses own or lease property, for example land, buildings, machinery and so on. This type of asset has a useful life of more than one accounting period (usually many years) and must be valued at the end of each accounting period. To do this, the asset’s value at the end of the period is depreciated.

With other types of assets, such as stock or work in progress, the only cost that needs to be transferred out is the amount used up during the accounting period. With Fixed Assets there are two costs that need to be transferred out at the end of each accounting period. Firstly, the amount used up during this period (Depreciation) and secondly, the original cost (also known as the fixed asset’s carrying value).

Fixed Assets are not revalued unless there has been a significant change in value shortly before they are closed. It is unlikely that the company would sell all of its Fixed Assets before the next revaluation, if they were to be sold and there was no change in value at this point, it could result in a loss on sale of these assets.