Merits and Demerits of Sinking Fund Method of Assets Depreciation

It makes provision for the replacement of the asset at the end of its working life while such a feature is conspicuous by its absence in other methods.

The main disadvantage of the sinking fund method is that as depreciation on the amount remains fixed throughout the life of the asset, it has a tendency to place an equal burden on the profit and loss account.

The result is that the profit and loss account is let off lightly in earlier years and is heavily burdened in later years.

The sinking fund method of assets depreciation is ideally suited for plant and machinery, as well as other wasting assets that require replacement.

The lease is to be renewed at the end of 3 years. For this purpose, a sinking fund is established.

The sinking fund investments will realize 5%. Sinking Fund Table shows that it is necessary to invest $0.317208 each year to achieve $1 at the end of 3 years, the rate of interest being 5%.

Required: Give entries in the company’s books. 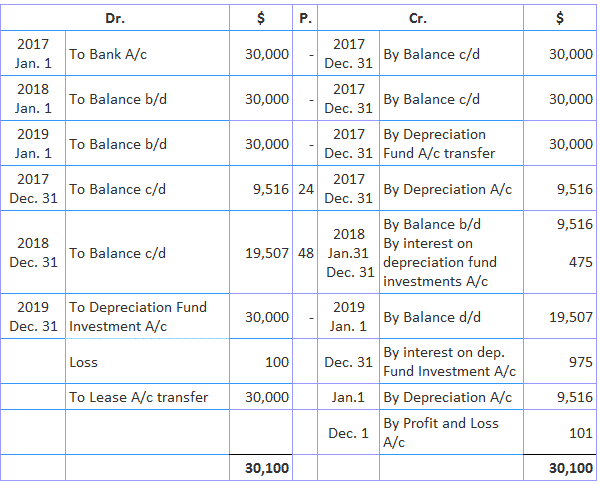 The Sinking Fund Method is a technique used to calculate the annual Depreciation of an asset. In this, a fixed amount is periodically set aside in a special account to accumulate funds for major repairs or replacement at the end of the useful life of an asset.

Merits: - it makes provision for the replacement of the asset at the end of its working life. - It is an acceptable method if a minimum rate of interest cannot be earned on current funds. Demerits: the Sinking Fund Method places an equal burden on the profit and loss account in earlier years, i.E., Depreciation remains fixed throughout the life of an asset. - The method tends to lower the apparent profits in earlier years and increase them in later years.

The Sinking Fund Method should not be used for a short life or rapidly depreciating assets. The firm must have sufficient reserves for this.

This depends upon how much Depreciation will accrue each year and what period is to be covered. If Depreciation is $10,000 and the firm wants the fund to grow to $25,000 within 5 years, it has to set aside $2,083 each year as investment in its sinking fund account.

The Sinking Fund Method of Depreciation can be used for most types of assets like buildings, machinery, plant, and equipment, etc.