Last In, First Out (LIFO): Definition

The LIFO method, which applies valuation to a firm’s inventory, involves charging the materials used in a job or process at the price of the last units purchased.

In other words, under the LIFO method, the cost of the most recent lot of materials purchased is charged until the lot is exhausted.

After this, the price of the next most recent lot is charged to the job, department, or process. This results in leaving an old lot of materials in hand.

When materials are returned from the factory to the storeroom, they should be treated as the most recent stock on hand. They should be entered in the materials ledger card balance below all of the units on hand, at the same price as they were when issued to the factory.

In terms of the flow of cost, the principle that LIFO follows is the opposite compared to FIFO. LIFO assumes that the last cost received in stores is the first cost that goes out from stores.

The cost of materials is charged to production in the reverse order of purchases. The later costs recorded on the materials ledger cards are used for costing materials requisitions, and the balance consists of units received earlier.

The following are the main advantages of the LIFO method of inventory valuation:

The LIFO method of inventory valuation suffers from the following major drawbacks:

Required: Show the value of the inventory on hand on 30 April using the LIFO method. 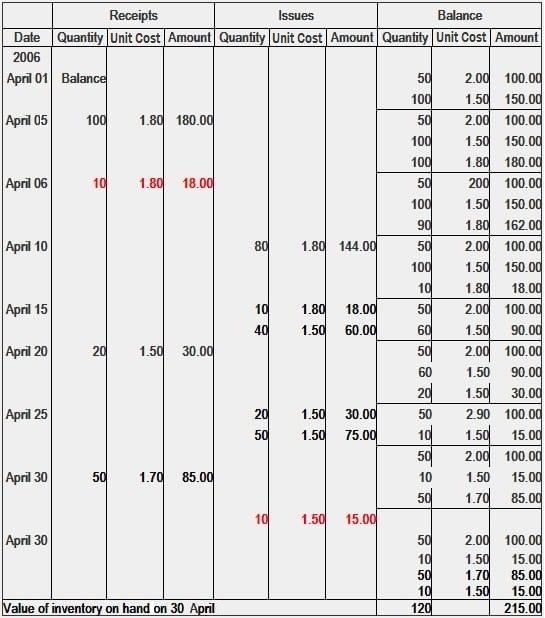 Problems Related to the LIFO Method

Several problems related to LIFO limit its effectiveness. Some of the more important problems include the effects of prices, LIFO liquidation, purchase behavior, and inventory turnover.

When prices decrease, LIFO shows higher earnings and, as a result, higher taxes. This is because the latest and, in this case, the lowest prices are allocated to the cost of goods sold.

In some industries, prices are volatile and thus unpredictable. For example, in 2018, a number of sugar companies changed to LIFO as sugar prices rose at a rapid pace. By switching to LIFO, they reduced their taxable income and their tax payments.

However, in 2019, sugar prices declined. The result of this decline was an increase in earnings and tax payments over what they would have been on a FIFO basis.

The potential of LIFO liquidation is a major concern to LIFO users. As noted already, at least a portion of the inventories valued under LIFO is priced at the firm’s early purchase prices; this might go back to the date when LIFO was adopted.

LIFO liquidation occurs when a firm sells more units than it purchases in any year. Thus, LIFO layers that have been built up in the past are liquidated (i.e., included in the cost of goods sold for the current period).

In effect, a firm is apt to sell units that may have 2000 or 2010 costs attached to them. The result is a lower cost of goods sold, higher gross margin, and higher taxes.

Although firms can often plan for LIFO liquidation, events sometimes happen that are beyond the control of management. For example, a supplier’s strike or unanticipated demand can cause unplanned LIFO liquidation.

As an example, Revere Copper and Brass Incorporated reported the following in its 2018 annual report.

During 2018, inventory quantities were reduced, resulting in the liquidation of certain LIFO inventory layers carried at costs that were lower than the cost of current purchases.

These amounts represented around 8% of net income and earnings per share.

The use of LIFO, especially in connection with the periodic inventory method, offers management a level of flexibility to manipulate profits. Although the is not problematic from the point of view of managers, critics of LIFO point to this as a disadvantage of LIFO.

In any case, by timing purchases at the end of the year, management can determine what costs will be allocated to the cost of goods.

Purchases at the beginning of the next year, however, could end up in next year’s ending inventory as a new LIFO layer. This will happen if the units purchased during this year exceed the units sold.

Therefore, the inventory profits usually found in connection with FIFO are substantially decreased.

In summary, choosing principles of accounting that can guide both financial reporting and tax strategy is an important management decision. In the LIFO versus FIFO case, it is even more important because of the LIFO conformity rule.

According to this rule, management is forced to consider the utility of increased cash flows versus the effect LIFO will have on the balance sheet and income statement.