The Generally Accepted Accounting Principles are a set of rules and procedures companies follow when preparing their financial statements. It includes guidelines on balance sheet classification, revenue recognition, and materiality.

Issued by the Financial Accounting Standards Board (FASB) and adopted by the United States Securities and Exchange Commission (SEC), GAAP strives to standardize and regulate the methods used in accounting across all industries.

GAAP also tries to ensure that financial information is reported accurately and fairly. This system contrasts with pro forma accounting, which uses hypothetical data about future projections. The International Financial Reporting Standards (IFRS) is the international equivalent to GAAP, which is currently used in 167 jurisdictions.

The U.S. Securities and Exchange Commission mandates that all publicly traded companies adhere to Generally Accepted Accounting Principles. These companies must file GAAP-compliant financial statements to retain their publicly listed status on the stock exchange. This is done by securing an appropriate auditor’s opinion after an external audit by a certified public accounting (CPA) firm has been conducted. For private companies, on the other hand, GAAP is optional and merely provides guidance. The Financial Accounting Standards Board sets GAAP standards within the United States, while the Governmental Accounting Standards Board (GASB) sets GAAP standards for state and local governments. Both policy boards ensure that financial reports are accurate and conform to GAAP requirements. The purpose of GAAP is to ensure that financial statements are transparent and consistent from one organization to another. By following GAAP, organizations can provide investors with a more accurate representation of their financial health. GAAP also encourages non-profit and government entities to be more accountable since it requires them to report their finances honestly and clearly. Overall, GAAP organizes information clearly and concisely. Thus, it is a helpful tool when making important decisions.

The Ten Core Principles of GAAP

GAAP guidelines are centered around these fundamental principles: 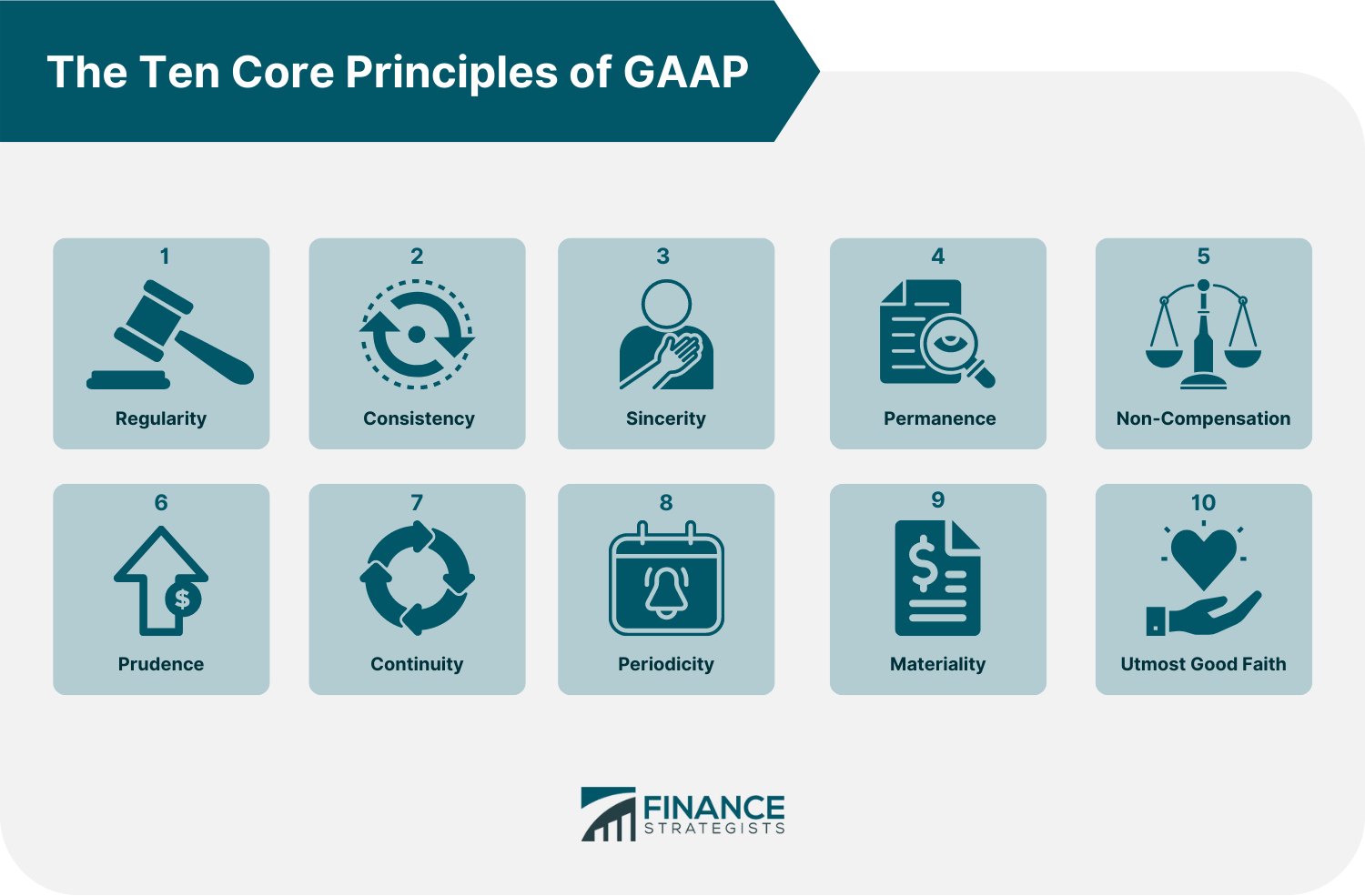 The Principle of Regularity

This concept presupposes that accountants comply with GAAP rules and regulations as a standard practice.

The Principle of Consistency

This principle means accountants are expected to consistently apply the same standard throughout the reporting process, from one period to the next. Changes or updates in the standard should be fully disclosed in the footnotes to the financial statement.

The Principle of Sincerity

Under this principle, accountants must provide an accurate and unbiased depiction of the financial situation of a business.

The Principle of Permanence

With this, accountants are directed to consistently apply the same financial reporting procedures for easy comparison.

The Principle of Non-Compensation

There should be full disclosure of financial information, both negative and positive. This should be achieved without compensating debt by an asset or revenues by an expense.

The Principle of Prudence

Financial data representation should be based on facts or well-informed judgment and not on speculation or guesswork.

The Principle of Continuity

In creating financial statements, such as in the valuation of assets, accountants are urged to assume that the business will continue its operation in the foreseeable future.

The Principle of Periodicity

According to this principle, entries should be accurately reported in the appropriate period.

The Principle of Materiality

Accountants must fully disclose all financial data and information in financial reports. This means that both negative and positive information must be reported.

The Principle of Utmost Good Faith

With this principle, it is assumed that there is utmost good faith or honesty among all the parties involved in every transaction.

GAAP provides concise and relevant data that makes it easier for all interested parties to determine the financial health of a business. This is one of the reasons why companies need to adhere to GAAP.

GAAP is generally viewed as a reliable system for financial reporting. Following GAAP guidelines assures lenders and investors that companies are being truthful and accurate in their reporting. With this in mind, most financial institutions will look for annual GAAP-compliant financial statements as a part of their debt covenants when issuing business loans. Consequently, most companies in the United States, even private ones, choose to adhere to GAAP. When a company is not abiding by GAAP accounting standards, it is difficult to make accurate comparisons between its financial status and those of other businesses. A distorted picture of a company’s financial health could be presented when non-GAAP measures are used. Thus, investors tend to be wary when companies are not using GAAP standards.

There are several regulatory bodies in the United States that issue accounting guidelines. Aside from the Financial Accounting Standards Board and the United States Securities and Exchange Commission, there is also the American Institute of Certified Public Accountants (AICPA). The GAAP hierarchy was created to assign different authority levels among the regulatory bodies and help accountants determine which guidelines to follow in specific situations. There are four different levels in the hierarchy as discussed in FASB’s Statement of Accounting Standards No. 162. Below is a summary of each one: 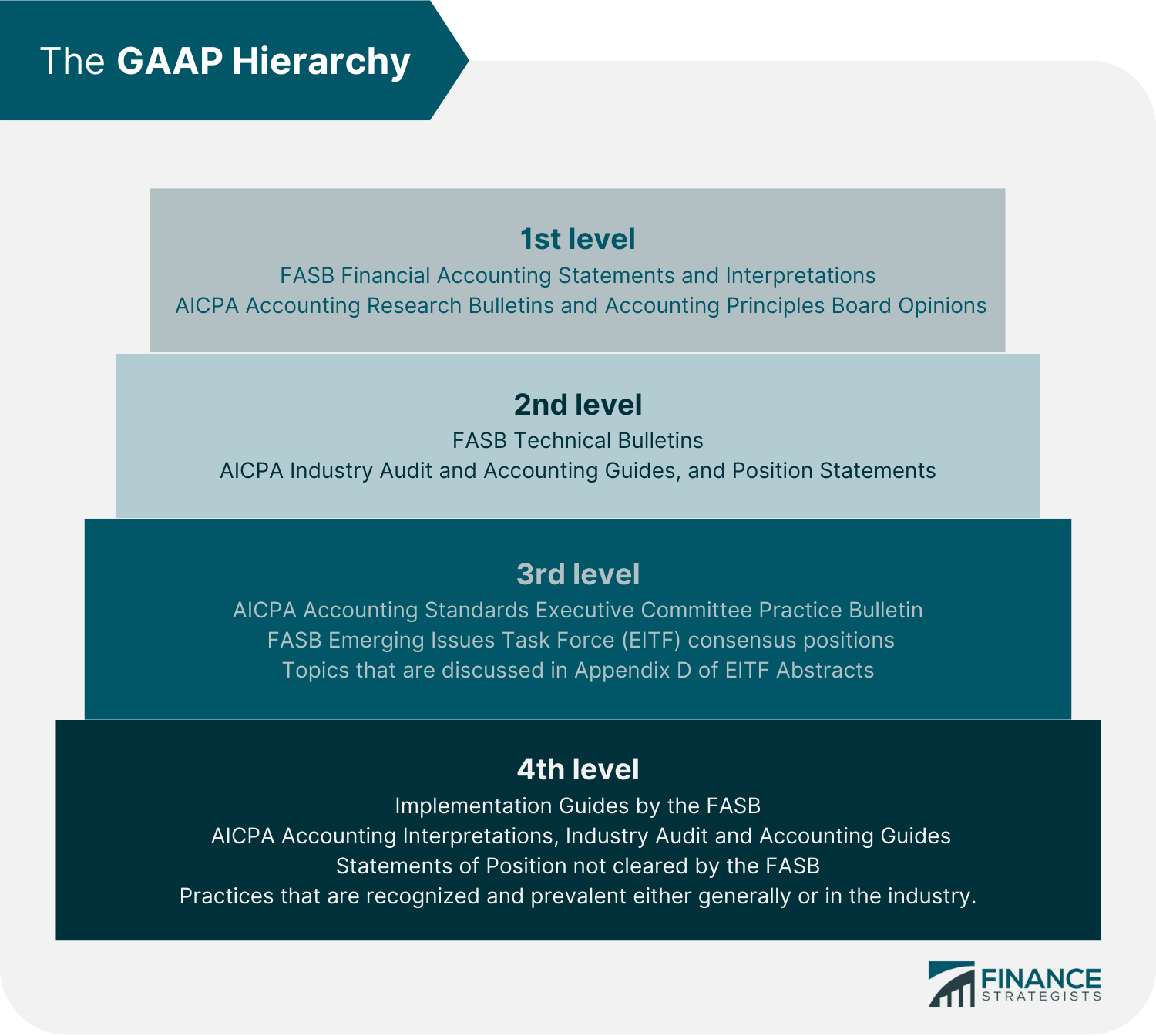 The evolution of GAAP first started when the United States Securities and Exchange Commission sought the private sector’s assistance in standardizing accounting practices. At that time, the responsibility was passed to the American Institute of Accountants, which created a specialized Committee on Accounting Procedure (CAP). Eventually, CAP gave way to the Accounting Principles Board (APB), which was created by the American Institute of Certified Public Accountants. Some of the rules outlined in GAAP were instituted by the APB. Then, in the early 1970s, FASB took over APB’s role. The FASB is now the primary private sector body entrusted to standardize accounting practices through the enforcement of GAAP. The International Accounting Standards Board is the global counterpart to the FASB. The standards they develop are often referred to as the IFRS. 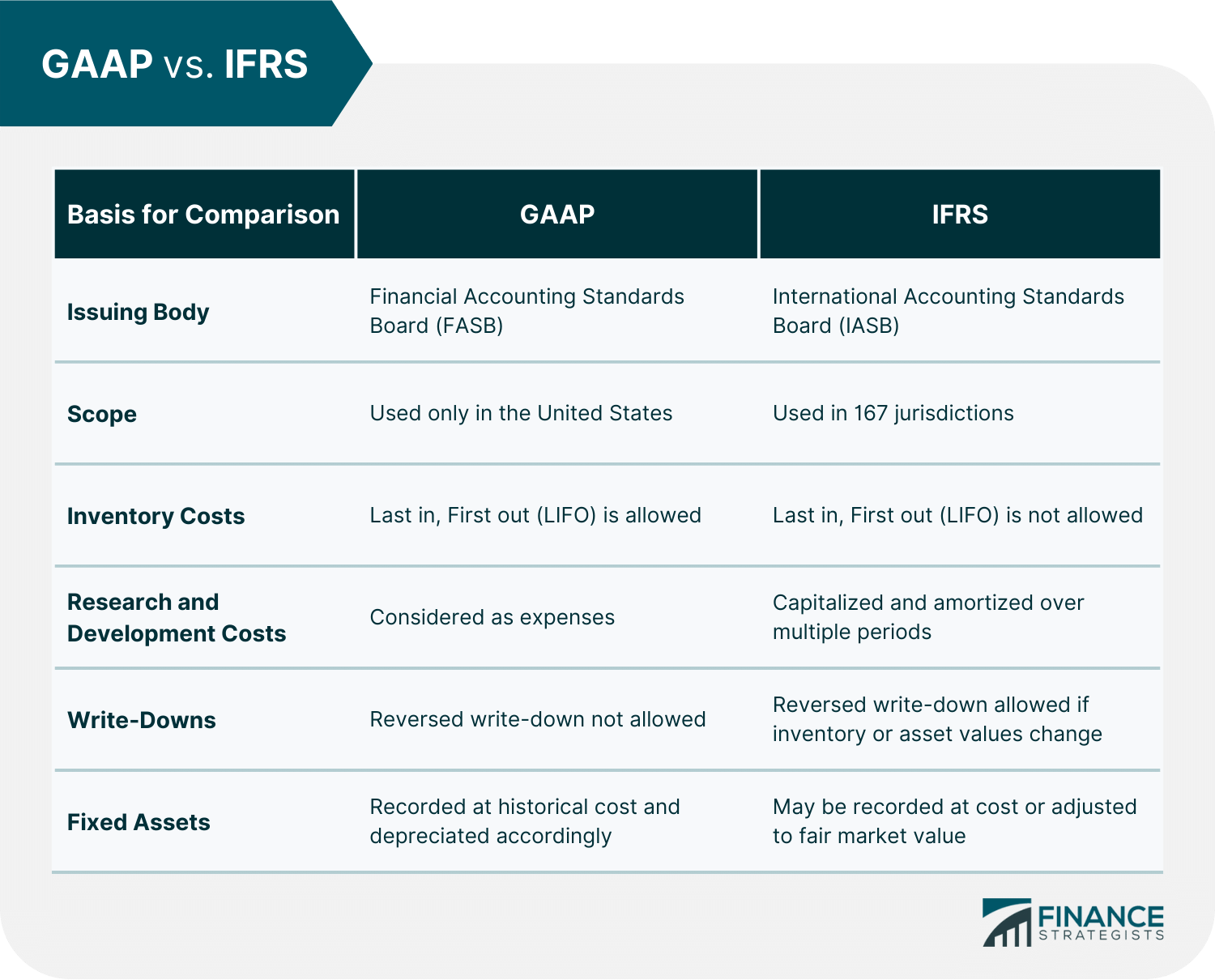 The Generally Accepted Accounting Principles are a set of accounting standards and procedures companies use to compile their financial statements. GAAP is designed to ensure that financial reporting is transparent and consistent from one company to another. While GAAP is the standard for financial reporting in the United States, IFRS is the standard used in over 167 jurisdictions worldwide. GAAP consists of 10 core principles: regularity, consistency, sincerity, permanence, non-compensation, prudence, continuity, periodicity, full disclosure, and utmost good faith. There are some notable differences between GAAP and IFRS, but both sets of standards aim to improve financial reporting.

What does GAAP mean, and why is it important?

GAAP is an acronym for Generally Accepted Accounting Principles. This is a set of accounting principles and procedures that companies use to compile their financial statements. It is important because it ensures that financial reporting is transparent and consistent from one company to another.

How is GAAP used in accounting?

GAAP helps standardize financial reporting so that investors and analysts can easily compare the financial statements of different companies. It aims to regulate the definitions, presumptions, and methods used in accounting across all industries.

The Financial Accounting Standards Board (FASB) issued the GAAP. However, there was some influence from previous regulatory bodies, such as the Accounting Principles Board (APB).

What is the difference between GAAP and IFRS?

While GAAP is the standard for financial reporting in the United States, IFRS is the standard used in over 167 jurisdictions worldwide. There are also differences in some of its rules, such as their treatment of research and development costs. Under GAAP, these are recorded as expenses. However, under IFRS, these costs are capitalized and amortized over multiple periods.