Oftentimes, manufacturing companies decide to construct an asset for their own use rather than purchasing it from another source. Two financial accounting issues must be considered when dealing with this situation:

In associating costs with the self-constructed asset, the direct material costs, direct labor costs, and interest are always included. However, practice is not settled with respect to overhead costs.

At one extreme, some advocate the inclusion of only the incremental overhead costs (i.e., that only the additional costs that are incurred because of the decision to construct should be added to the asset account).

This practice would exclude indirect costs such as depreciation and salaries of supervisors, which would be incurred with or without the project.

By contrast, others advocate assigning overheads on the same basis used for regular production. These commentators have suggested that anything less will understate the asset’s cost and overstate the cost assigned to routinely manufactured goods.

Guidance may be provided by observing whether the construction effort curtailed the production of marketable goods. If production was not displaced, it is argued, only the incremental costs should be debited to the asset account.

On the other hand, if production was displaced, then overheads should be allocated to the asset on the same basis used for regular production.

At the other extreme, some accountants have argued that the cost of the asset should be increased to include the markup that an outside manufacturer would have charged.

Proponents of this approach argue that the resulting higher cost will more closely approximate the value of the asset and, therefore, provide more comparable numbers. This position is not generally accepted.

The information below outlines the cost of a self-constructed building erected by the Sample Company under the three approaches mentioned above. 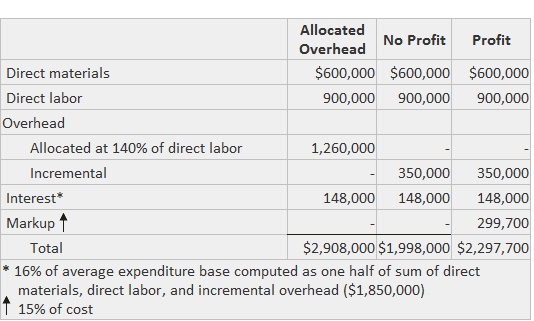 In dealing with costs incurred in excess of an estimated purchase price, accountants must seek to identify which of two reasons caused the overrun to occur.

If the self-constructed asset is of higher quality or more efficient than commonly available versions, the higher cost may well be justified and should be added to the asset account.

On the other hand, if the assets are of comparable quality or efficiency, then the excess costs should probably be attributed to the periods in which the asset was constructed.

This treatment is based on the concept that an asset should never be recorded at an amount that is higher than a determinable fair value when it enters the firm.

Oftentimes, manufacturing companies decide to construct an asset for their own use rather than purchasing it from another source. Two financial accounting issues must be considered when dealing with this situation: identification of cost and treatment of costs in excess of the purchase price. In associating costs with the self-constructed asset, the direct Material Costs, direct labor costs, and interest are always included. However, practice is not settled with respect to overhead costs.

The cost of self-constructed assets includes direct labor and Material Costs, as well as overhead expenses. It also generally includes interest on funds borrowed for the project.

The term self-constructed assets refers to assets built by a company and appearing on its balance sheet.

Materials, labor, and overhead costs can all be considered as capitalized assets in self-constructed properties.

In accounting, a self-constructed asset is one that a company builds under its own management. For example, when a company constructs an entire building on its own land, it is using its own resources to create an asset.