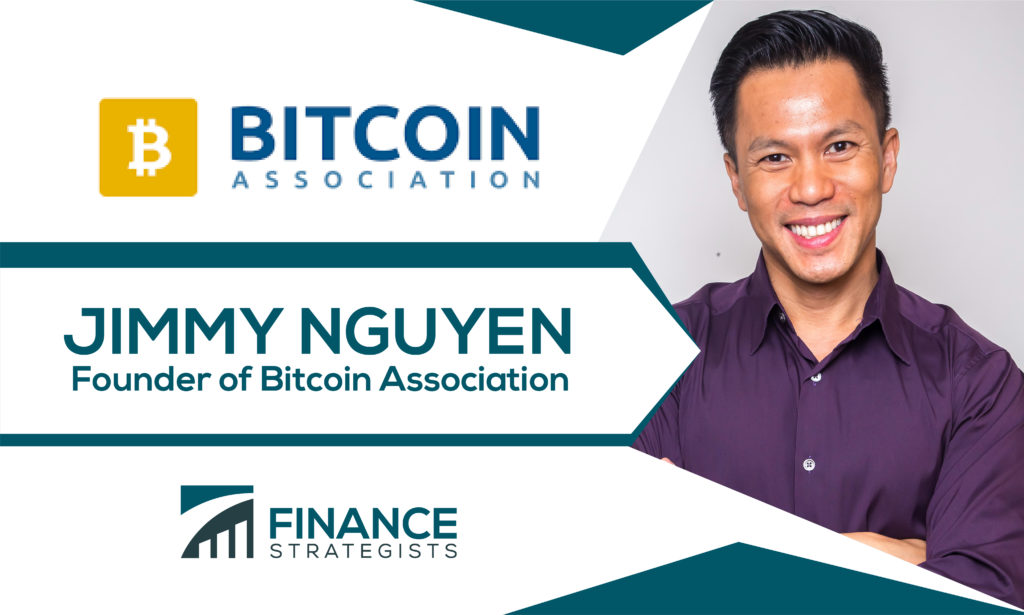 Finance Strategists sat down with Jimmy Nguyen, founder of Bitcoin Association. He shared his views on the past, present, and future of the company, as well as the insight that led him down the path to success.

Who is Jimmy Nguyen?

The move into blockchain technologies was a significant career shift for me; I spent the first 21 years of my professional life working as a digital technology and intellectual property lawyer, which included stints as a partner at three major leading firms. Some of my clients became involved with digital currencies and assets, and that eventually prompted me to leave legal practice to help build the future of blockchain technology.

I’m now based out of Seattle, though I spent most of my life in the Los Angeles area. Prior to the pandemic, I spent most of my time on the road and in the air, travelling the world to build Bitcoin as the next major data network on the scale of the Internet.

My father. He was a federal judge in South Vietnam. My parents (with four children) fled in April 1975, the night before Saigon fell to North Vietnamese forces. I was 2 years old at the time and have no memories of it. What I do remember is our family re-settling into Southern California and the work that both of my parents put in to support that dream for all of us.

My father took night law school classes and unsuccessfully attempted the California Bar exam. Although highly educated in Vietnam, he was inhibited in the U.S. by his English language skills. My older brother did not become a lawyer, so I always thought about it.

After excelling in competitive speech and debate, choosing law school seemed like a logical choice for me. But ultimately, I chose the law as a way to honor my father, and in a way, complete his journey in the U.S. My legal career ultimately led to my current role at the center of Bitcoin technology – a life which is now centered around opportunities my father never could have imagined for his son, all those decades ago.

I’ve also been influenced by my father’s – and mother’s – incredible tenacity in starting life entirely anew in the U.S. I cannot imagine how difficult it must have been, but they did it without complaint and always with gratitude. Whenever times get tough, I remember what my parents persevered through and know that I can get myself through anything.

Don’t be afraid of risks. After years of lawyering, I realized that I spent too much time in an inherently risk-averse culture. Professional goals and greater life satisfaction are achieved when you take some leaps of faith in life.

Q: What is Bitcoin Association?

Bitcoin Association is a non-profit organization based out of Zug, Switzerland that works to advance business using the Bitcoin SV blockchain and BSV digital currency. To achieve this, the Association works to develop the global Bitcoin SV ecosystem, bringing together the essential actors – enterprises, start-up ventures, developers, merchants, exchanges, service providers, blockchain transaction processors (miners) – and working alongside them in both a development and representative capacity.

A big part of our mission is to help the world understand that Bitcoin is more than just a digital currency and blockchain. It is also a network protocol which, like the Internet protocol, is the foundational rule set for an entire data network that fuses data (Bit) with monetary value (coin). Just like the world operates on a single global Internet, we support use of the original Bitcoin protocol to operate the world’s single blockchain, massively scaled on Bitcoin SV. That will build real utility and real value in the BSV digital currency – which should appeal to investors.

Because the potential for Bitcoin as a data network is so vast, our work is extremely varied and includes:

Supporting Bitcoin SV technical infrastructure. This includes the software used on the Bitcoin SV network, as well as providing tools that help Bitcoin miners and enterprises leverage the unique capabilities of this blockchain.

Establishing Bitcoin SV as the global data ledger for enterprise. This includes outreach with major businesses and corporates to help them understand why Bitcoin SV’s massively scaled blockchain meets their needs. We are also developing technical standards that will fuel further adoption by enabling Bitcoin SV applications to be interoperable.

Growing and training the Bitcoin SV developer community. Harnessing Bitcoin’s true power requires teaching developers to unlock capabilities in Bitcoin’s programming language and protocol. We provide tools and resources suitable for professionals of all levels – from new entrants through to experienced developers, in addition to offering an array of opportunities for learning – from online lectures and courses, through to multi-day Bitcoin SV Developer Conferences.

Public policy work to influence responsible growth of the industry. We engage with government bodies and lawmakers to develop a regulation-friendly ecosystem that fosters lawful conduct, while facilitating innovation using all aspects of Bitcoin technology.

Bitcoin Association is distinguished by its support for Bitcoin SV as the sole blockchain that can massively scale to be the global data ledger for enterprise. We are also unique in our belief that the world needs only one blockchain, rather than the current state of 5000 unnecessary cryptocurrencies and too many distributed ledgers. Competing platforms, such as Bitcoin Core (BTC) or Ethereum lack the ability to scale, making their blockchains congested and expensive (in terms of transaction fees) to use. In contrast, Bitcoin SV adheres to the original protocol, design and vision of Bitcoin’s creator Satoshi Nakamoto, who wrote there should be “only one global chain”.

To fulfill that vision, Bitcoin SV offers unbounded scaling with no default limit on its block size, thus supporting high transaction volume, greater data capacity and fast processing, all with very low transaction fees. With these properties, businesses can use the Bitcoin SV blockchain to intertwine micropayments (of cents or even fractions of a cent) with diverse data uses (such as user-generated content, smart contracts, tokens, and Internet of Things).

We are also making great strides to professionalize the Bitcoin industry. For example, we engaged a security audit firm to review the Bitcoin SV Node software, which we believe was the first time any Bitcoin node implementation had ever been security audited. That level of professionalism is needed to achieve enterprise adoption, and we bring similar approaches across our work. As I like to say, it’s time for Bitcoin to grow up – and Bitcoin Association is leading the way.

Q: What led you to start Bitcoin Association?

In November 2018, Bitcoin SV emerged from a split of the Bitcoin Cash network in order to protect the original vision of Bitcoin creator Satoshi Nakamoto. That means using the original Bitcoin protocol and enabling it to massively scale, so that it can be the world’s data ledger. Many companies quickly began to move over to the Bitcoin SV blockchain. At the time, I was leading nChain, the blockchain R&D firm which is a key supporter of BSV. However, the Bitcoin SV ecosystem was new and we recognized it would take a significant and sustained effort to grow – work that is best led by a global industry organization. That prompted the creation of Bitcoin Association, and I took on the role of its Founding President. Rather than just building a private company, I stepped up to help lead growth of an entire new technology ecosystem which will transform the world as much as the Internet did.

I am helping to build more than just a business, but an entire Bitcoin technology ecosystem for the world. The experience has taught me so much, but the key lessons could be distilled as:

Focus on building real utility to achieve real value in your business. This is especially important in the digital currency space, where far too many people launch “get rich quick” coins. If you want to build a business (or in my case, a technology sector) with lasting value, start by asking this question – how will businesses and consumers derive beneficial utility from what I’m creating?

When trying to introduce new technology at a large scale, seek to work with existing enterprises and institutions. I’ve learned this from several people in our industry. Building stand-alone Bitcoin SV products is important to demonstrate what the blockchain can do with new ways of thinking. But it’s equally important to support creation of applications that integrate with, and improve, existing systems already used by enterprise and even government institutions. This can lead more quickly to widespread adoption of the technology because you take advantage of widespread distribution rails already in place.

Recognize the many things you do not know and learn from experts who have core competencies to supplement your own.

Assemble a good team and allies that you trust. You can’t do everything yourself, so talented lieutenants and partners are absolutely necessary to implement your plan.

You don’t change the world unless you challenge expectations and dare people to think bigger. Working with Dr. Craig S. Wright, Satoshi Nakamoto himself, it’s a lesson I quickly learned from him.

My current role is more than just a job; it’s a mission. In 5 years, I want Bitcoin SV to be the dominant (if not, only) global blockchain, used by the world’s largest enterprises, government institutions, and billions of people around the globe. I want to see Bitcoin Association lead this effort and become the most influential organization in the blockchain and digital currency space. I know this vision is grand, but I firmly believe it is achievable.

After that, someday, you’ll find me taking a long break on a sunny beach. And when that day comes, I’ll look out across the ocean, comfortable in the knowledge that I completed my father’s journey from Saigon, yet forever thankful for his efforts gave me the opportunity to build something bigger than either of us ever could have dreamt.