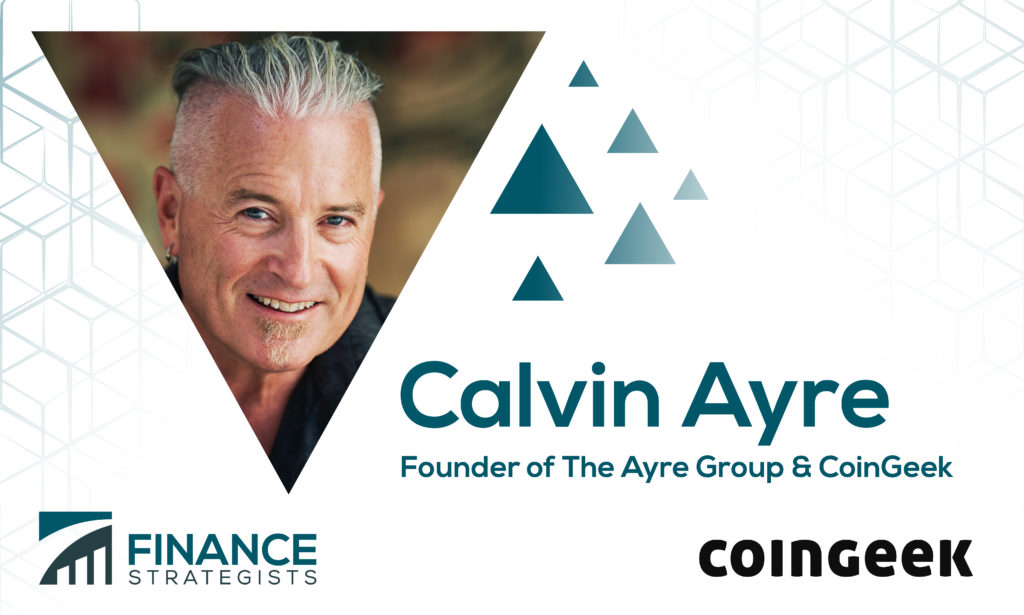 Finance Strategists sat down with Calvin Ayre, founder of the Ayre Group and CoinGeek. He shared his insight into the past, present, and future of Bitcoin SV, the technology that led him to start CoinGeek, as well as some of the things he learned from running the business.

Who is Calvin Ayre?

Calvin Ayre, originally from the middle of nowhere in Canada, now a citizen of Antigua. While in Canada my father gave me my own pigs to rear and sell, and in doing so taught me the most fundamental aspect of business; build and sell. My big break came from online gaming via the Bodog brand, which I created in the mid-nineties and became one of the biggest operators in the online gambling space. Now I focus most of my attention on digital currency, specifically Bitcoin SV, because it is the only digital asset that can scale to global business level transactions per second coupled with very low transaction fees. Win-win for any enterprise, big or small, from banks to governments to boutique retailers and even the unbanked.

My father for sure, and at university in Canada I was heavily influenced by Richard Branson.

More recently meeting Dr Craig Wright, the inventor of Bitcoin, has sent me on this newer path to make people see why Bitcoin SV is the real Bitcoin. Sadly, because those invested in other digital dark coins are scared of what BSV does they seek to undermine both Craig and BSV. However the community understands the power that Bitcoin’s massive scalability allows, such as micropayments and immutable data storage on public blockchain. These technologies are really growing fast now.

I was always pretty good at making sure I enjoyed myself, as it’s been one hell of a ride so far. But, seriously, it is important to make sure you live your life – you can accumulate all the money in the world but there’s no point if you don’t have fun along the way. I am pretty happy with my decisions so far. However, I might tell myself not to be a long suffering Canucks fan!

Q: What is CoinGeek?

CoinGeek serves a few fundamental purposes: the first is a news portal that reports on the growth and realities of the Bitcoin SV ecosystem. There is so much FUD and fake news in the world of digital currencies that I’ve had to set this site up to set the record straight, much like I did with CalvinAyre.com for the online gambling industry. CoinGeek is also a miner of Bitcoin SV. This is simply logical; the BSV blockchain is growing by the day and so simply mining it is an obvious step to take. Last, CoinGeek is also an important player in association with the Swiss based Bitcoin Association in growing the BSV community with conferences and other community building events online and offline.

Well, it’s really Bitcoin SV that stands out from all the other dark coins because it scales, has low transaction fees, and also works within the law. This creates enormous opportunity for unique business models using the massively scalable low cost micropayments and massively scalable immutable data storage on a public block chain. Only BSV can do this so it has a global monopoly. Additionally, there is a huge difference between ‘private’ and ‘anonymous.’ A credit card is private, as is Bitcoin SV, but neither are anonymous. That’s what other coins seek to be which will simply never fly with any regulator. What makes CoinGeek unique is that we are the only major media organization that really understands this and where this will take us, and so are the only ones that you can follow this explosion with.

Q: What led you to start CoinGeek?

Simply so that people could have a source of truth about Bitcoin SV and its capabilities. To report accurately what is happening on the blockchain and offer balance for the personal attacks on Craig and the 400+ businesses that are building projects that will see a new internet (the metanet) which will be based on micro-transactions. This metanet eliminates trolls, fake news and advertising. This is very topical right now as we see people trying to influence elections and the like, this kind of manipulation won’t be possible with the metanet. So, hopefully, we are going to help the world become a better place!

There are far too many people that want to feather their own nest rather than build nice houses that everybody can enjoy. On the flip side there are also some incredibly bright people out there who are going to change the world. I’m hitching my wagon to the latter.

Continuing the education of people about BSV via our conferences, the 6th of which will be held in New York in October. I then see Bitcoin SV becoming the plumbing for millions of businesses across the globe. Like Intel was to the PC, BSV will be to enterprises that want a transparent, immutable ledger at a fraction of the cost. But BSV isn’t the enemy of VISA or the Banks; in fact, they could, and indeed should, build their infrastructure on a secure, scalable blockchain, and there’s only one of those! The BSV metanet will be integrated into the internet and the two will become one system.

Beyond that we will continue our charity work via The Calvin Ayre Foundation, I am building a Health Resort in Antigua, a helicopter business there as well and, of course, we have the Bodog Beach Bar for when it’s time to wind down after some wakeboarding. I am invested in, and will continue to invest in, businesses building on the BSV chain. Retirement is not a concept I believe in.