A bill of exchange is defined as follows:

An unconditional order in writing, addressed by one person to another, signed by the person giving it, requiring the person to whom it is addressed to pay on demand or at a fixed or determinable future time a certain sum in money to (or to the order of) a specified person or to bearer.

To better understand the above definition of bill of exchange, the following points should be kept in mind:

A bill of exchange is an order to pay certain money. It is not a request.

The person who makes (i.e., writes) the bill is the person who orders to pay the amount of the bill. This individual is called the drawer.

The person upon whom the bill is drawn or the person to whom the order is given is known as the drawee. This individual accepts the bill by writing the word "Accepted" across the face of the bill and signing it.

The bill is payable whenever the amount of the bill is demanded (only in the case of sight bill).

A future time that can easily be determinable (e.g., 90 days after the date of drawing the bill).

The amount is payable in the form of money rather than a commodity or any other means. For example, a sum of $10,000 in money.

The payee is the person to whom the amount of the bill is paid.

The amount of the bill can be paid to the drawer, or to someone else, as per the order of the drawer or to the person who presents the bill on the due date.

This is why definition contains the phrase" to or to the order of a specified person or to bearer."

In this modern age of competition, credit selling is an evil that every businessperson has to engage in. This is because credit sales are one of the strongest tools to enhance net income.

The refusal to give credit means that competitors may win potential sales. However, no businessperson wants to sell goods on credit to customers who may not pay their debts.

Firstly, remember that businesspeople always seek to promote sales and, alongside this, to secure money and customers. A seller wants to realize the amount of goods sold as soon as possible, maximizing the goods sold and minimizing the chance of bad debts can be minimized.

In contrast to a seller, a buyer wants to get maximum credit period. Is there any method that satisfies both the parties? The answer is yes.

There is a payment method, known as bill of exchange, that provides the seller with evidence of amount receivables as well as the amount of goods sold. Noteworthily, this method also offers a sufficient credit period to the buyer.

The bill of exchange method of payment has several advantages compared to other methods.

Specimen/Format of Bill of Exchange

Parties to a Bill of Exchange

There are three main parties involved in a bill of exchange: drawer, drawee, and payee.

The drawer is the maker of the bill. They draw or writes the bill and they sign the bill. Although a bill can be accepted before receiving the drawer's signature, their signature is required to complete the document.

The payee may be the drawer or someone else. If the drawer keeps the bill with themselves until the due date and receives the amount of the bill, then the drawer and payee are the same person.

There are also other parties involved in a bill of exchange, including:

Holder of the Bill

The holder of a bill of exchange is the person who is entitled in their own name to the possession of the instrument and to receive the amount due thereon.

It is not only possession but also entitlement to possession that makes a person the holder of the bill. Thus, a person in possession of a stolen or lost bill cannot be a holder.

Holder in Due Course

Drawee in Case of Need

If the original drawee refuses the bill and the holder of the bill gets the bill noted and protested due to non-acceptance, then any person who is not already liable to accept the bill may accept the bill with the consent of the holder. This person is known as the acceptor for honor.

Types of Bill of Exchange

A bill of exchange can be classified based on the following three bases:

A bill with no fixed payment date. It is payable at the time when it is presented by the holder. Days of grace are not allowed on a bill of this kind. A demand bill is also known as a sight bill.

A bill drawn for a specific time period. This type of bill has either a fixed future date or determinable future time.

A bill drawn and accepted due to the sale and purchase of goods on credit. This type of bill is drawn by the creditor (seller) and accepted by the debtor (buyer).

A bill drawn and accepted without the sale and purchase of goods. The main purpose of this bill is to provide financial assistance to one or both parties. The bill does not come into existence due to any trading activity.

A bill drawn in one country and accepted and payable in another country. Both the drawer and drawee of this bill live in two different countries.

Acceptance of Bill of Exchange

The drawee is not liable to pay the bill until they accept the bill. Therefore, the drawee's acceptance of the bill of exchange is necessary to complete the instrument.

The act of signing and writing the words "Accepted" across the face of the bill by the drawee is called acceptance. The advantage of acceptance is that it fixes the liability on the drawee.

Acceptance is of the following two kinds:

If the bill of exchange is accepted without any condition to the order of the drawer, the acceptance is termed as general acceptance.

When a bill of exchange is accepted with any qualification or condition to the order of the drawer, the acceptance is known as qualified acceptance.

Qualified acceptance is separated into the following types:

Tenor of the Bill of Exchange

The time period after which a bill of exchange is matured is called the "tenor" of the bill.

For example, if a 90-day bill is drawn and accepted, the bill will be matured after 90 days. So, the tenor of this bill is 90 days.

In the business community, when the due date of a bill is calculated, it is customary that after maturity of the bill, three extra days are given to the drawee for the payment of the bill. These extra days are called days of grace.

Usance refers to the period of time for the payment of the bill which is fixed by the tradition of the market.

For example, consider a 90-day bill that will be matured after 90 days. Therefore, tenor of the bill is 90 days. However, three extra days will be given to the drawee for payment of the bill. Here, the usance of the bill is 93 days.

Maturity of Bill of Exchange

A term bill matures when its tenor expires. Therefore, maturity of the term bill may be defined as the end of the tenor of bill.

For example, suppose a bill is drawn on 1 January 2019 for three months. Its date of maturity and due date are shown as follows:

Working of Bill of Exchange

How does a bill of exchange work? Let's explain this with the help of a few examples.

Example 1: Working Without a Bill of Exchange 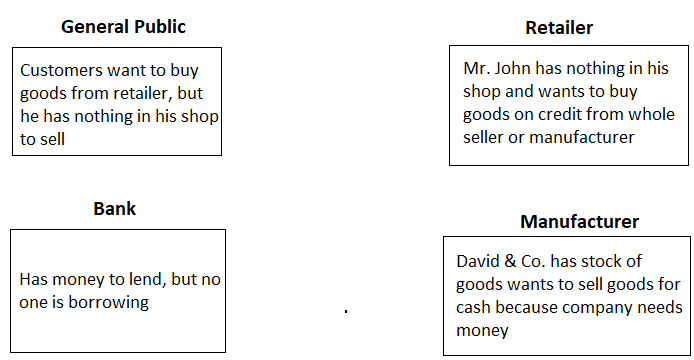 The situation shown in the figure above can be understood using the following notes:

Now you will see how a bill of exchange helps to promote business activities.

Example 2: Working With a Bill of Exchange 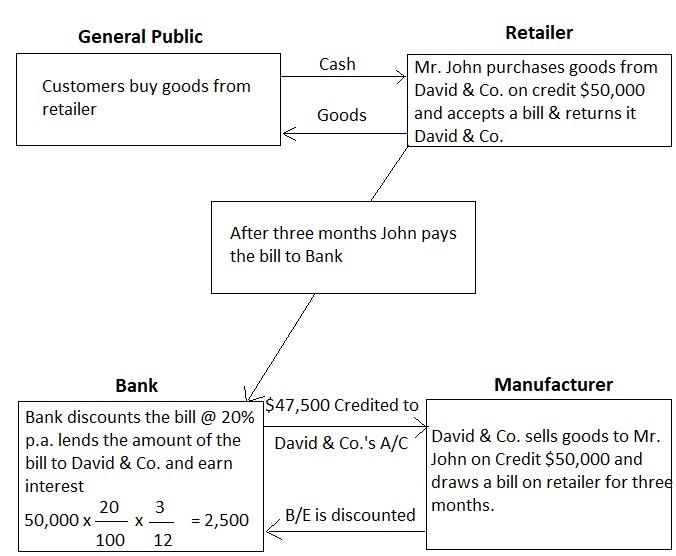 The following points are noteworthy in relation to this figure:

This example shows how a bill of exchange helps to promote business activities.

Advantages of Bill of Exchange

The use of bills of exchange as a method of payment has several advantages compared to other methods of payment for the credit sale of goods. Some of these advantages are the following:

1. Legal evidence
A bill of exchange is a legal document; therefore, it is a legal evidence of the debt. As such, the drawer can sue for the recovery of the amount of the bill.

2. Specific amount and date
A bill of exchange is signed by both parties. For this reason, both parties are aware of the amount of the bill and its due date.

3. Discounting facility
Another advantage of a bill of exchange is that it can be discounted if the drawer or holder needs funds before the due date. The bill can be sold to the bank to receive the total amount in advance.

4. Negotiable
Negotiable means transferable. A bill of exchange payable to the bearer can be transferred by one person to another for the settlement of debt.

7. Easy remittance
As bill of exchange is a negotiable instrument, just like a postdated cheque. Therefore, it can easily be remitted from one place to another, just like a cheque.

Two Aspects of Bill of Exchange

On the other hand, the debtor (buyer) accepts the same bill and becomes the drawee. The amount of the bill is payable by drawee, and so from the drawee's point of view, the bill of exchange is known as the bill payable.

Do you want to test your knowledge about Bill of Exchange? Take the Multiple Choice Questions we have prepared for you here.

To send money or goods to someone else through somebody called as "collector". This person will receive the money or goods and deliver it to the intended person. The collector usually charges a fee which is called 'commission'.

A Bill Of Exchange is an unconditional order in writing, addressed by one person (the drawer) to another (the drawee), signed by the drawer, requiring the drawee to pay on demand a certain sum in money to, or to the order of, a certain person (the payee). All bills of exchange must contain a definite date on which they become due.

The main difference between a bill and a cheque is that a Bill Of Exchange is not payable on demand, whereas a cheque is. A bill becomes payable at some future date which is fixed when the bill is drawn, whilst a cheque is payable at once. A cheque must always be signed by the drawer, whereas a bill may be signed by the drawer or by someone else on the drawer's behalf. Bills are also more formal than cheques and are used for transactions which involve larger sums of money.

A bill becomes payable at the maturity date, which is always specified on the bill. A Bill Of Exchange which becomes payable on a certain day is known as a 'dated' or 'specific' bill. Bills may also become payable after a certain period following the date of the bill has elapsed, known as an 'open' or 'uncertain' bill.