A bank reconciliation statement is prepared by a depositor (account holder) to overcome differences in the balances of the cash book and bank statement.

Another definition is that a bank reconciliation statement is a process of accounting for differences between the balance as stated on the bank statement and the balance of cash according to the depositor’s records.

One of the procedures for establishing the correct cash balance (and for controlling cash) is the reconciliation of the bank and book cash balances.

Differences may be attributed to three sources:

In the case of items in transit, these arise from several circumstances. The firm’s account may contain a debit entry for a deposit that was not received by the bank prior to the statement date.

Similarly, some checks credited to the ledger account will probably not have been processed by the bank prior to the bank statement date. Banks often record other decreases or increases to accounts and notify the depositor by mailed notices.

Examples include deposited checks returned for non-sufficient funds (NSF) or notes collected on the depositor’s behalf. Since these items are generally reported to the company before the bank statement date, they seldom appear on a reconciliation.

Additionally, bank reconciliation statements brings into focus errors and irregularities while dealing with the cash. Furthermore, they reflect the actual position in terms of bank balance.

Bank reconciliation statements safeguard against fraud in recording banking transactions. They also help to detect any mistakes in cash book and bank statement.

They also explain any delay in the collection of cheques, and they identify valid transactions recorded by one party but not the other. 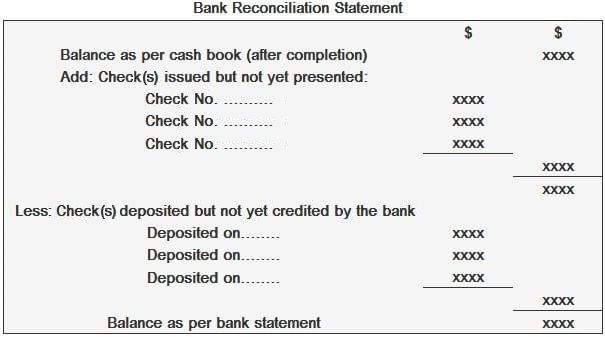 If, however, the cash book shows an overdraft (Cr. Balance per cash book but Dr. balance per bank statement), the bank reconciliation takes the following format: 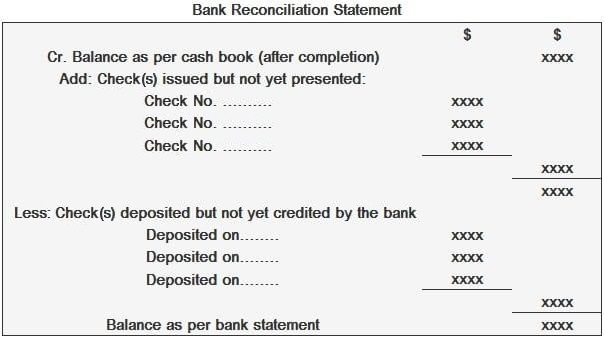 A bank reconciliation statement is prepared at the end of the month. The entries in the statement stop being the cause of discrepancies after a few days.

For example, if a businessman issues a check for $2,500 to a supplier on 28 May, it is quite possible that the check may not be presented by the supplier to his bank until, say, 5 June.

The bank statement submitted by the businessman at the end of May will not contain an entry for the check, whereas the cash book will have the entry. As a result, a difference of $2,500 is caused between the two balances.

Nevertheless, on 5 June, when the bank pays the check, the difference will cease to exist.

Similarly, if a businessman deposits any checks on the last day of the month, these cheques may be collected by his bank and shown on his bank statement three or four days later.

While this will cause a discrepancy in balances at the end of the month, the difference will automatically correct itself once the bank collects the checks.

Hence, at the end of each month, the first thing to do is to consult the bank reconciliation statement prepared at the end of the previous month. The items therein should be compared to the new bank statement to check if these have since been cleared.

If so, these entries will not appear in the bank reconciliation statement prepared at the end of the current month.

The following is the bank column of a cash book prepared by Sara Loren for May 2017:

She received the following bank statement for May 2017: 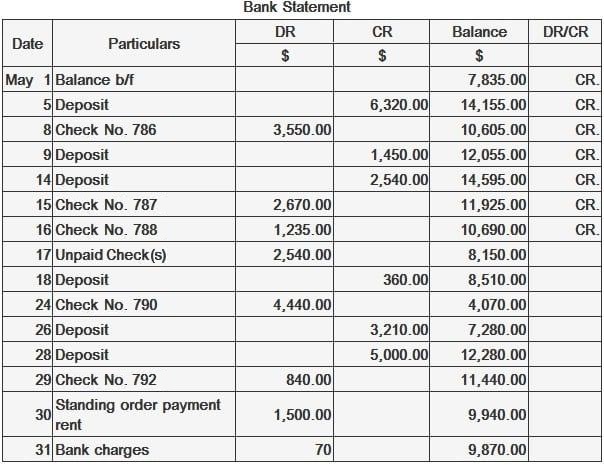 A careful comparison of the above two documents indicates the following: 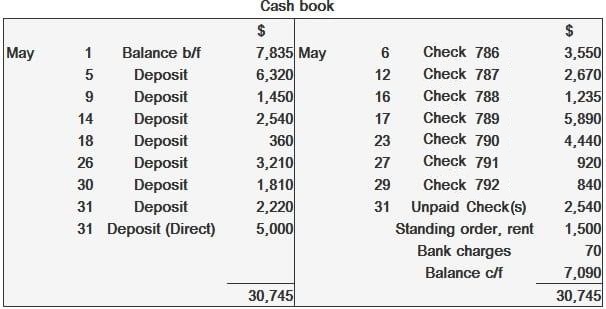 The Dr. balance shown in the completed cash book is $7,090, while the bank statement shows a Cr. balance of $9,870. A bank reconciliation statement must, therefore, be prepared as follows: 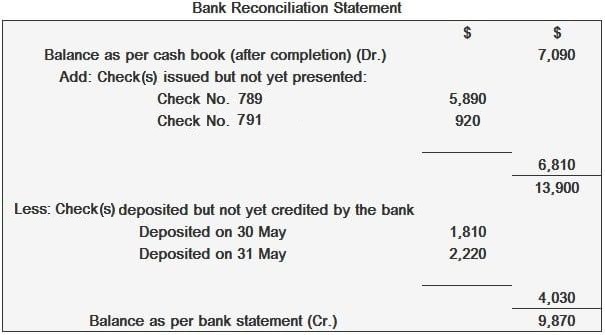 Do you want to test your knowledge about bank reconciliation statement? Take the Multiple Choice Questions we have prepared for you here.

Bank on the experts

We hope this article has shed some light in understanding bank reconciliation. Familiarize yourself with some more banking terms by speaking to a financial advisor in Stamford, CT. If you live outside the area, our financial advisor page will route you to a list of the areas we serve.

Do you want to test your knowledge about bank reconciliation statement? Take the multiple-choice quiz we have prepared for you here.

A bank reconciliation statement is a document that is created by the bank and must be used to record all changes between your bank account and your accounting records. It shows what transactions have cleared on your statement with the corresponding transaction listed in your journal.

Bank reconciliations will come in handy in many cases. They are helpful when reconciling accounts to print statements, clearing errors, etc. They can also be helpful when reconciling accounts for pulling reports. Another example would be where you deposit cash, but the teller doesn't post it correctly. You have to go back and compare your records with the bank's to try and figure out what went wrong so you can correct your records to match the banks.

To create a bank reconciliation, you will need to gather your bank statements and reconcile them with your accounting records (ledger).