Errors can occur in both the recordkeeping systems of both the bank and the depositor. The bank reconciliation process is used to discover these mistakes.

Service charges may be levied by the bank for regular or special services. They often appear as a reconciling item because banks notify customers of the amount only through the bank statement.

The four basic steps involved in the bank reconciliation process are described below.

1. Identification of Items in Transit

The first step involves identifying any deposits and checks that the bank has not processed at the statement date. Any other items (such as NSF checks or collected notes) on the statement should be identified.

The accountant will also look to see if prior notification has been received and the event properly recorded. If an entry has not been recorded, the item will appear on the reconciliation.

A log should be made of unrecorded service charges.

3. Preparation of the Reconciliation

If the bank has made an error, it should be notified promptly. No entry is made for these errors. For any reconciling items appearing in the book section, a journal entry should be recorded to adjust the cash account to the correct balance.

After receiving a bank statement dated 31 December 20x1 for a checking account at First National Bank, the accountant for Sample Company began the reconciliation process.

The deposit slips and canceled checks were compared with the records. The results are shown below.

The reconciliation prepared by the accountant appears in below example. 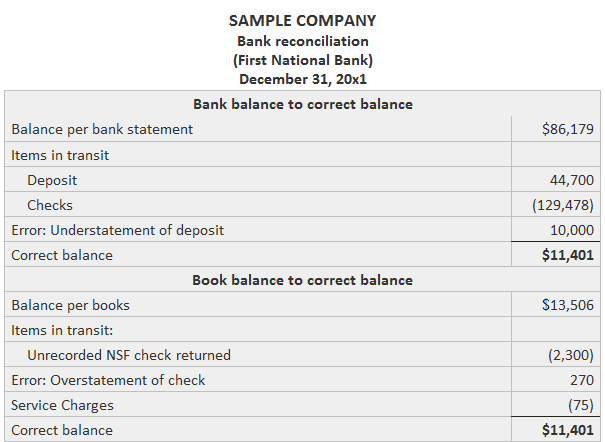 The next step is to contact the bank and report the deposit error. An inquiry should also be made concerning the lack of notification about the NSF check.

In turn, a journal entry should be made to record the reconciling items from the book section. It would take on this form:

The items in the bank section show that the bank’s version does not agree with the books because a deposit had not been processed and the checks had not yet been canceled.

If the deposit was made toward the end of the month, there would be no need to notify the bank.

On the other hand, if the deposit was made earlier, it would be essential to determine why it hadn’t been received.  The accountant should review the outstanding checks with the intention of investigating any extremely old ones.

For example, the payees may be contacted to determine if the checks have been misplaced. The $10,000 error is added because it understated the deposit and the account balance.

The items shown in the book section arise from the previously unknown events. For some reason, Sample Company was not notified about the NSF check.

The usual procedure calls for the bank to send the depositor not only the notification but also the check itself. Since the notification had not been received, it was necessary to put this item on the reconciliation. The signer of the check still owes the $2,300.

The error on the check has two effects.

First, the balance of the Cash account was reduced by $300 instead of only the $30 that was mistakenly written on the check.

Second, the supplier’s account payable was reduced by $300 when the payment was $270 smaller. The service charge was deducted on the reconciliation because no notification had been received about the amount prior to receiving the statement.