What Is the Percentage of the Net Sales Method? – Definition

As we will see later the balance in the Allowance for Uncollectible Accounts is simply a result of the entry to record the estimated uncollectible accounts expense for the period.

To demonstrate the application of the percentage-of-net-sales method, assume that you have gathered the following data, prior to any adjusting entries, for the Porter Company at the end of 2019. This assumes that all accounts determined to be uncollectible have already been written off against Accounts Receivable and the Allowance account. 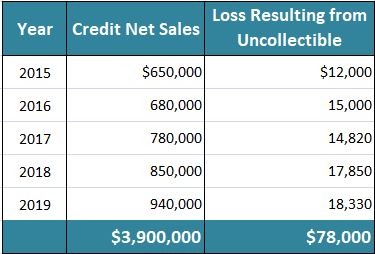 Based on this data, the debit to the uncollectible accounts expense is 2% of net credit sales of $1 million, or $20,000. The correct adjusting entry at December 31, 2019 to record this estimate is:

After this entry is posted, the relevant T accounts appear as follows:

The balance in the Allowance for Uncollectible Accounts Expense is @22,000 – $2,000 from the prior year’s sales that have not yet been determined uncollectible and $20,000 from 2019 sales.

At the end of any particular year, the credit balance in this account will fluctuate, but only by coincidence will it be equal to the debit balance in the account Uncollectible Accounts Expense.