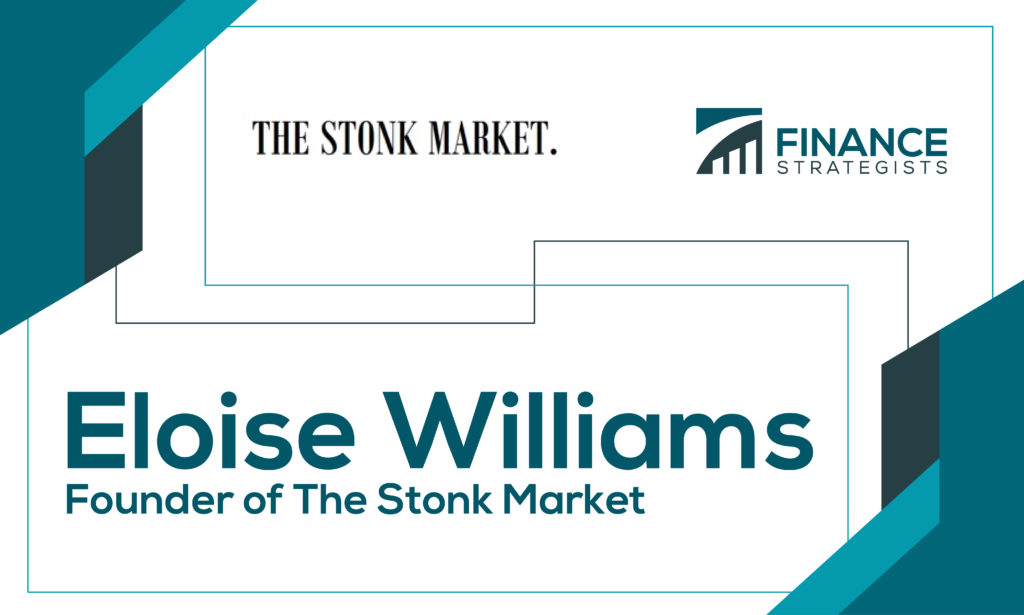 Finance Strategists sat down with the founder of The Stonk Market, under the pseudonym Eloise Williams. They discussed the past, present, and venture of the Stonk Market, as well as their plans for the brand.

Who is the Founder of The Stonk Market?

Thanks for giving me the opportunity to do this interview. I need to stay anonymous for security reasons but my pseudonym that everyone knows me by is Eloise Williams. As a background, the personality of Eloise William’s is an 87-year-old grandmother who is interested in the stock market. She has gotten quite popular on FinTwit recently, going from around 100 followers in January to almost 10,000 today.

For my personal background, I live in a flyover state. I went to community college out of high school and ended up getting interested in the stock market while in college. During college I read as many investing books as I could get my hands on and started networking with professionals in the industry. After I graduated, I landed a job at a hedge fund where I am currently a research analyst. In the next year or so I am looking to exit the hedge fund industry and pursue a few entrepreneurial ventures I have been working on, including The Stonk Market.

The biggest influence on my life has been my parents. They taught me from a young age to budget and live under my means. These personal finance principles have carried over into my adult life – giving me “endurance” to go a significant amount of time without having an income. The principals of living under my means will allow me to leave my corporate job at an early age to pursue start-up type business ventures that most would perceive risky. The traditional educational industry skips over personal finance and leaves this to the parents to teach – who for the most part, are not educated in it themselves. I feel fortunate to be raised by parents that taught me that a 9-5 is a tool to buy your own time back, in order to pursue your personal passions. Not a tool to make it through the next week.

If I knew what I know now, I would have started building websites like The Stonk Market a lot earlier in my career. I knew I always wanted to try building a popular website but always made excuses like the lack of time. In addition, I wish I would have started building a social media presence earlier than I had. In the past I have rarely participated in social media. Since starting The Stonk Market, I have begun to see the power social media has in terms of the networking potential. I believe social media is here to stay – in some sort of medium – and having a presence will be key for anyone looking to monetize content they create.

What is The Stonk Market?

Q: What is The Stonk Market?

The Stonk Market is a satire site focused on the investing and financial industry with a comedic twist. I initially started the site as a joke almost a year ago. Despite starting as a joke, I ended up realizing The Stonk Market’s potential almost immediately – after getting positive feedback from readers.

The Stonk Market is still relatively new, but we have amassed close to one million cumulative views since starting the site. When I first launched The Stonk Market, I posted a tweet asking if anyone would be interested in writing for me. I was not expecting anyone to be interested in writing but thought I would give it a shot. Since then, The Stonk Market has had close to fifty people write for us. Most only write a couple of articles then disappear. But other writers work with me to produce content on a weekly basis.

The goal is to grow the site into a recognizable satire brand within the financial and investing industry. Furthermore, I am currently in the process of working with a couple of our content creators to launch a sports section, YouTube channel, and engaging newsletter.

What makes The Stonk Market standout from its competitors is the niche we are writing in. I have yet to see a recognizable satirical financial/investing website. There are certain platforms like Wall Street Bets’s subreddit, that have forms of satire, but I am not aware of a pure financial satire site.

The Stonk Market also allows almost anyone to create content for our platforms as long as they can create funny and engaging content. This is a play off of Seeking Alpha’s model that we are trying to emulate to help us standout in the satirical and financial industry. Using freelance content creators will effectively allow us to create content faster and get our readers more engaged by becoming writers.

Q: What led you to start The Stonk Market?

I have always enjoyed writing and one of my goals has been to build a popular financial website. I wrote for a larger publication when I was going to college and quickly learned how much I enjoyed the writing process and the power of writing. Since then I have started a couple of other websites (financial and non-financial) to test and see if there was readership for those sites.

With that being said, The Stonk Market started off as a joke. I never really used Twitter before but had an old Twitter profile that I used to follow random finance accounts. Around Christmas of 2019, when I was bored at my in-law’s house, I decided to change my Twitter profile to Eloise Williams (a grandmother interested in investing).

I started tweeting horrible investment advice using Eloise Williams that no one would ever consider doing and the account just took off. Shortly after, I ended up rebranding one of my old websites to The Stonk Market and started putting out satirical investing articles that Eloise Williams wrote. Almost immediately people started messaging me telling me to keep up the good work and that my Twitter account was “gold.”

I knew that I was onto something when in early in 2020 one of my articles ended up getting tweeted out by Peter Schiff and Jeffrey Gundlach – which kind of blew my website up for a bit. A couple of weeks later I wrote an article about an Elementary School that was forced to take possession of ten million barrels of oil and major financial publications in Norway and Brazil picked it up as real news. After seeing the potential of financial satire, I decided I would try to make the site into a full-time gig.

The experience of building The Stonk Market has taught me a few things. Firstly, is the power of networking and social media. Since launching The Stonk Market I have connected with hundreds of different individuals who have all provided a value add to the website. This includes, writers, hedge fund managers, advertisers, and individuals I have partnered with to build this business. Secondly, building The Stonk Market has taught me all the different monetization strategies a website has. Before getting into this business I only thought a website made its money through display advertisements. Since then, I have learned a significant amount of ways a website can monetize its viewers and followers – which creates a considerable amount of operating leverage as the site scales. Finally building The Stonk Market has taught me that patience is key. It takes a while for your writing to get seen by people. But with enough consistency, patience and the power of the internet, the potential to have your writing seen by thousands of eyes is possible.

In the next five years I would like to build The Stonk Market into a recognizable brand in the financial industry. This will include, continuing to build the main website, launching a YouTube channel, starting a newsletter and a couple of other ideas I am working on. I also think The Stonk Market can be used as media platform to build other online businesses or websites. In the future I see myself working with talented content creators who write for me now and partnering on ventures they are passionate about – using The Stonk Market’s presence as a springboard.