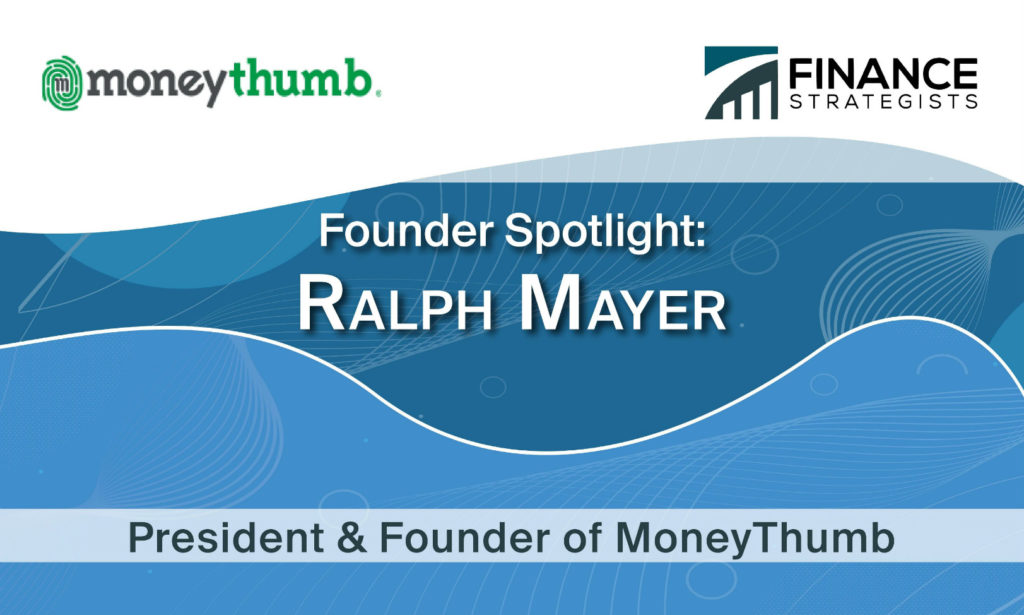 Finance Strategists sat down with Ralph Mayer, founder of financial file conversion software company MoneyThumb. He discussed how his background led to the company’s inception, as well as where he thinks the business is headed.

Who is Ralph Mayer?

I was born in England, raised in Boston and today I live near San Diego. I have a degree in Architecture from McGill University in Montreal, Quebec and a Master’s of Science from MIT. I guess you could say I’m a fitness enthusiast. I enjoy walking, biking, and swimming. I’ve been swimming in the ocean instead of the pool, which has been a big change. And due to the pandemic and gyms being closed, I converted our shed into a workout room. My wife and I have two sons and five grandchildren.

I remember a professor at MIT who was a WWI vet. He wasn’t your typical lecturer. He really showed me what people are capable of if they keep an open mind. It gave me a whole new perspective, not just about business but about life in general. I learned that when you are surrounded by inspirational people, it makes you a better person and a better leader. One of my first employers was very passionate, confident, and energetic. He could galvanize his team and I wanted to emulate that. I also admire Larry Ellison, former CEO of Oracle Corporation. He built the first relational database which we take for granted today.

Be assertive! I didn’t have a lot of confidence when I was young. I felt pretty insecure around authority figures. One of my first jobs was with a start-up and one day the boss told me I needed to come up with a solution or the company would fail. This pushed me to another level and I accomplished the task at hand. Sometimes we make it harder than it has to be. I believe we all need to make healthy decisions and sometimes that takes sacrifice. Problems are guidelines. We are all capable of more than we think.

MoneyThumb started out as an investment analysis firm but I soon realized there wasn’t a lot of interest out there. The concept was a little ahead of its time. What was getting attention was data conversions. My Aha moment if you will, came when a customer asked if we could convert a PDF file. My first thought was, that’s impossible, but then I thought, if we could do it, it would be very valuable. At the time I was a one-man-show. My background was in programming but I thought, let’s see what we can do. So in essence, MoneyThumb evolved into something completely different. We create software that converts and analyzes financial data from PDF documents. We sell conversion software to accountants, small businesses and individuals. And we sell analysis software services to financial lenders based on the same core technology.

Nobody does what we do.  I was recently asked if this software is similar to the Tom Cruise film ‘Minority Report.’ Spielberg was ahead of the game. His thoughts on what the future of technology might look like when it comes to consumerism are pretty spot on. We’ve all been there. You Google something and then you see an ad for it on social media. Well, MoneyThumb automatically recognizes data. And we do it at an affordable price. Some companies send bank statements to other countries to proofread which adds to their cost. We don’t do that. We also offer trial versions to make sure it works with your banking institutions’ formatting.

I’ve learned a lot, like it’s almost impossible to build a successful business alone. You have to recognize that having the right people around you is so important. I’ve learned that making mistakes is okay. I’ve gained confidence and believe that treating others with kindness and respect is most important. You might call me a serial entrepreneur. I’ve always been a big supporter of entrepreneurs and that’s why I was on the board of directors for a National Angel Investors group. And I like solving problems. It’s probably my engineering mentality.  As a kid I loved to build things. I’d spend hours with my Legos. So much so that my parents encouraged me to become an architect. But once I got into it, I found that I didn’t excel like some of my colleagues. It seemed like every design they worked on was exceptional. Only a handful of mine were significant. On the other hand, every computer project I worked on was successful. I soon realized that maybe I wasn’t made to be an architect. So I’ve learned it’s never too late to make a career move.

I see myself spending more time with my family and hopefully being able to take in a ballgame. With all the time I’ve spent in California you’d think by now I would have jumped on the San Diego bandwagon, but I’m still a Red Sox and Celtics fan at heart. As for the company, I’d like MoneyThumb to continue to grow so that it is eventually suitable for acquisition. But retirement? I’m not sure. I still have a few ideas. The internet is ever-evolving and most likely will continue to face challenges concerning data protection. I love solving problems.