The journal, also known as the general journal, is involved in the first phase of accounting because all transactions are recorded in it, originally in chronological order.

This is why the general ledger is also called the original book of entries, chronological book, or daybook. In the journal, two aspects of every transaction are recorded, following the double-entry system of accounting.

After analyzing a business transaction, it is recorded in a book known as the journal (or general journal). When a transaction is logged in the journal, it becomes a journal entry.

The process of recording transactions in the journal is referred to as journalizing.

Journalizing is the second step in the accounting cycle. The first step is transaction analysis, which provides the information needed to journalize a transaction. The process of recording in the journal is called journalizing.

The general journal is a diary of business equities.

Throughout time, the general journal has been referred to in many ways. For example, it is also known as the book of original entry, the primary book, the book of primary entry, and the book of first entry.

Some transactions do not involve sales, purchases, cash receipts, or cash payments, or are complex to fit conveniently into the general journal.

Examples include a sales or purchase return, a compound entry involving several accounts, and most adjusting entries. These entries are most easily made in the general journal.

These entries are recorded in the general journal shown below.

It is worth noting that the receivables and payables accounts must be posted twice.

That is to say, the entry must be posted to both the appropriate subsidiary account and the controlling account.

A standard format for a general journal is shown below.

As shown above, a journal typically has five columns. The function of these columns is described briefly below.

The year, month, and date of the transaction are written in the date column. The year is entered immediately below the heading. It is written once per page (i.e., it does not have to be repeated for every entry on the page).

The description column is used to enter the names of the accounts involved in the transaction. The debit part of the entry is written first and the credit part is written below the debit part.

It is common to leave some space at the left-hand margin before writing the credit part of the journal entry.

A brief description known as narration is also written in this column below the credit part of the entry.

This column is used to record the amounts of the accounts being debited.

This column is used to record the amounts of the accounts being credited.

The following transactions are related to Mr. John’s business. 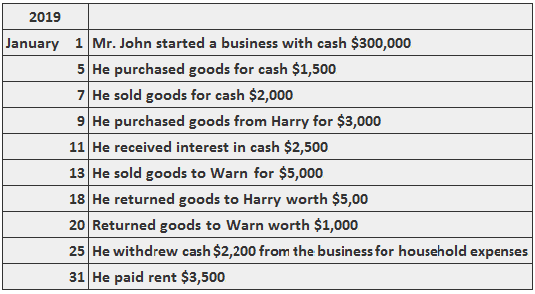 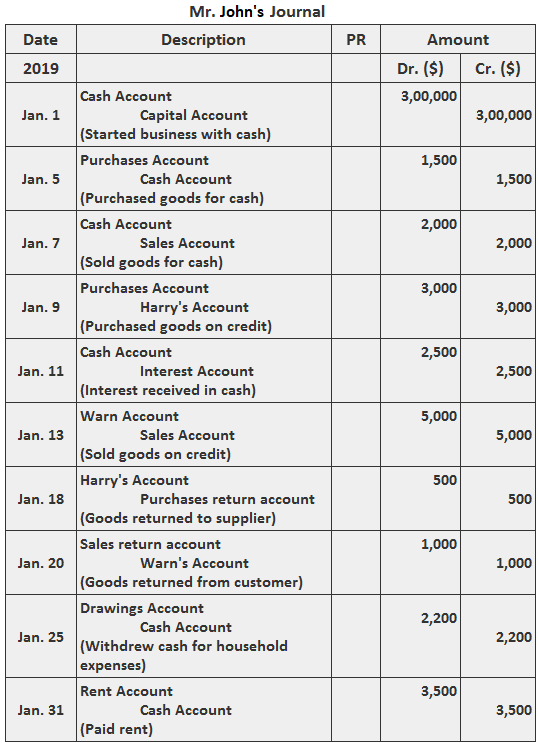 Do you want to test your knowledge about General Journal? We have prepared quizzes for you.

The main difference between General Journal and cash book is that while General Journal includes all transactions that are recorded by a company, cashbook records only cash receipts of the business/organization.

General Journal has two column headings above date column. The two headings are, a) account headings column b) date of entries column.

One of the main advantages of using General Journal is that it provides an exact details about all transactions. It provides a place to take any kind of transaction, even Trial Balance.