The S&P 500, short for Standard and Poor’s 500, is a stock market index that tracks performance of 500 U.S.-based large-cap companies from various sectors.

It is widely considered a gauge of investor sentiment and its returns reflect the state of the American economy.

Thus, returns from the S&P 500 typically go up when the economy is doing well and typically trend downwards during a recession.

The S&P 500 is a market cap – weighted index, meaning companies with the highest valuations have the most impact on the index’s value.

How to Calculate S&P 500 Index Value

To calculate the index value, take the price of each share times the number of shares that can be traded on the open market (known as “float” ), to give you a company’s “float-adjusted market cap.”

Then add the value of all the float-adjusted market caps of the companies in the S&P 500 and divide by the S&P 500’s divisor. 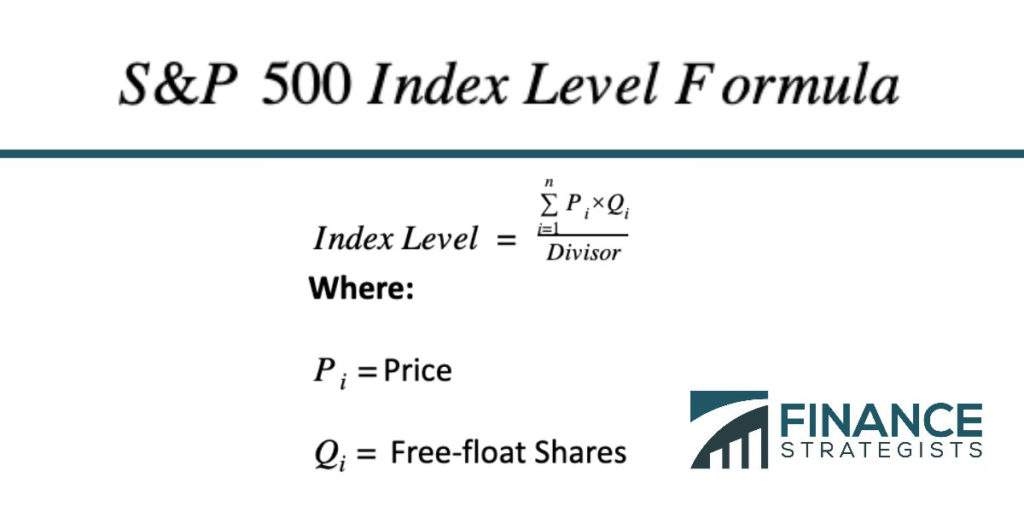 The divisor is used to account for changes, such as stock splits and new companies entering or exiting the index.

Also, the sum of market capitalization of companies listed in the S&P 500 amounts to trillions of dollars, so the divisor normalizes the value to a more digestible figure.

To be included in the S&P 500 index, companies must satisfy seven criteria.

Some of them are:

The index’s composition is reviewed each quarter, and new companies are added to it or previous ones are removed from it.

Over the years, the index’s composition has changed to reflect the current American economy.

Technology is currently the dominant sector, accounting for more than 1/4 of the overall index.

The Dow Jones Industrial Average (DJIA), which consists of 30 stocks, is another popular index used as a bellwether for the overall economy.

But the S&P 500 is considered a more accurate barometer of the economy because it has more sectors and companies in its index.

While it is not possible for the average consumer to invest directly in the S&P 500 index, they can invest in one of the numerous indexes or exchange traded funds tracking it.