Operating income does not include expenditures that affect a company’s net income, such as gains from sales of assets or non-operating expenses including one-time losses or interest and tax expenses. It does, however, include cost of goods sold or sales costs, which is the only item deducted from total revenue when calculating gross profit or gross income. Thus, operating income is more general than gross income but more specific than net income in how it weighs a company’s expenses against its revenue.

Thus, the formula for calculating operating income breaks down into the following: 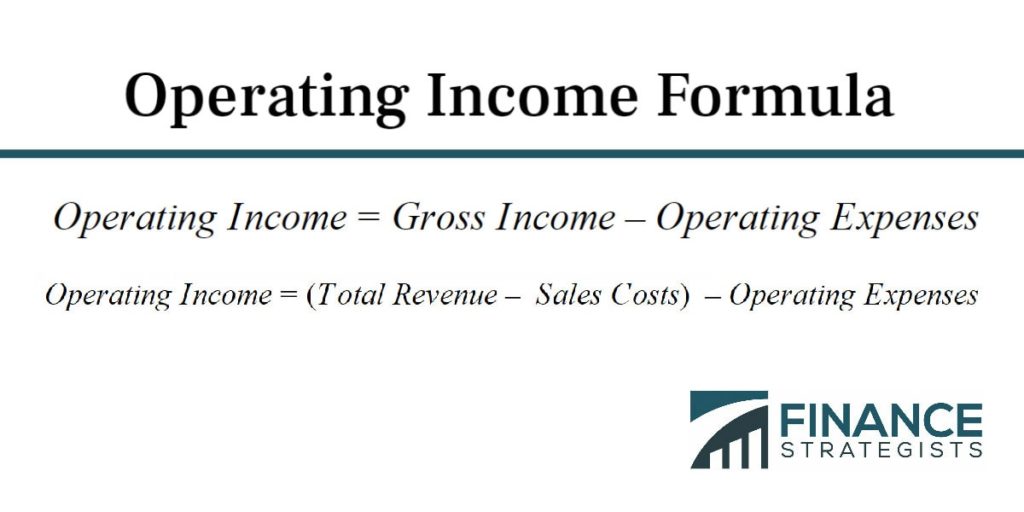 While operating income may not be as holistic of a picture of a company’s profitability as net income, it is a crucial metric in order to understand the type of profit a company is turning from just its day-to-day operations.

The net income shows a company’s total profit when all revenues and expenses are factored in. It is almost always listed at the bottom of an income statement, which is how it gets its moniker of “the bottom line.” Other calculations of profit, income or earnings, such as gross income, EBIT and operating income, are all more specific interpretations of net income that exclude certain revenues and expenses.

Examples of expenses used in net income but not operating income include interest, taxes, income from asset sales or other alternate revenue streams, one-time losses and various other uncommon expenses. Net income also includes all expenses and revenue that are seen in operating income such as gross income, depreciation, sales expenses and administrative expenses.

While operating income lacks the complete overview of a company’s profitability that net income provides, its specificity can still be a valuable tool when looking at a company’s finances. For instance, if a company is showing a loss to its bottom line (or net income), an operating income can show whether that company is still turning a profit in its day-to-day operations or whether it is operating at a loss by taking on too many expenses in its normal course of operations.

Operating income factors in costs incurred for business activities including Sales, General & Administrative (SG&A) costs, manufacturing expenses etc. It also does not include income earned from investment and other activities but operating income provides a more detailed look at a company’s ability to make money because it considers the costs involved for a company to generate its income.

For example, if a company ABC reports $100 million in revenue from product sales during the second quarter, then that figure is the total amount of money that the firm made from selling the product. During the previous quarter, ABC had revenues of $75 million. An investor looking at those figures might be impressed by the increase.

But closer analysis may reveal a different story. Suppose ABC’s operating income was $2 million for the previous quarter and -$10,000 for the next one. Then it means that the company incurred a loss even as it increased sales.

Operating income is a reflection of a company’s ability to convert its expenses into profits through efficient allocation of its resources. As an illustration, in the earlier example, ABC’s increase in profits came at the expense of losses in its income statement. This means that the company was not making optimal use of its resources or was overextending them to generate revenue. This inefficiency could create problems further down the line when it is unable to service debt commitments or further expenses on its balance sheet.

It is important to remember that operating income is just one of several metrics used to analyze a company or industry’s operations. It only tells part of the overall company story and must be used in conjunction with other metrics. For example, suppose that ABC from our earlier example had ambitious plans to expand beyond its local markets within the next two years to capitalize on growing demand for its products. Therefore, it took a hit to its operating income for a couple of quarters to rapidly expand its network. The red ink on its operating income figures in the income statement may not tell you that story. But other metrics, such as increased sales and product traction, might.