Acid-test ratio, also known as quick ratio, is a quantitative measure of a firm’s capability to meet short-term liabilities by liquidating its assets.

It is calculated as a sum of all assets minus inventories divided by current liabilities.

Generally, a score of one or greater for the ratio is considered good because it implies that the firm can fulfill its debt commitments in the short-term.

An acid-test ratio of less than one is a strike against a firm because it translates to an inability to pay off creditors due to fewer assets than liabilities.

However, an acid-test ratio score that is extremely high can also mean idle inventory or cash lying around on its balance sheet.

However, these scores are not standard across industries.

Acid-test ratios can be good or bad depending on their industry and business conditions.

For example, a retail behemoth like Walmart may be able to negotiate favorable payment terms with suppliers that do not require immediate payments.

On the balance sheet, these terms will be converted to liabilities and more inventory.

The quick ratio will have a higher figure for the ratio’s denominator.

Therefore, the company may have a low score and idle inventory. But that is not necessarily bad for its business.

Technology companies are another case in point because they have low fixed inventory numbers.

Thanks to their high margins, they also generate healthy profits that may not necessarily be reinvested into the business.

Apple, which had high cash figures on its balance sheet under then-CEO Steve Jobs, was an example.

Its quick ratio almost touched a figure of 3 under Jobs.

However, it was still considered an attractive investment.

As the company began distributing dividends to shareholders, its quick ratio has mostly stabilized to normal levels of around 1.

Why is Acid-Test Ratio Important?

At a quick glance, acid-test ratios are a measure of a firm’s capability to stay afloat and a function of its ability to quickly generate cash during times of stress.

However, it takes into account all current assets and current liabilities, regardless of timeframe or maturation date.

Therefore, it is not a really useful metric to determine whether the company can stay afloat, if and when its creditors come calling.

Quick ratio establishes a timeframe and places restrictions on the number of assets that can be included in calculations.

Inventory that takes a long time to convert into sales is useless to meet emergency obligations.

Similarly, securities and bonds that have a maturity date far out in the future and cannot be marketed or sold immediately or within a short duration are also of not much use.

For purposes of calculation, acid-test ratios only include securities that can be made liquid immediately or within the next year or so.

Long term assets are not counted.

Quick ratios are useful only when they are compared to industry standards or trends for that sector.

For example, the retail industry has a quick ratio value that is substantially lower than its current ratio.

By ordinary standards, a quick ratio of less than one is considered unhealthy.

However, the retail industry’s low acid-test ratio is a mark of its robust inventory practices.

Remember a quick ratio only considers current assets that can be liquidated in the short-term.

Inventory is deducted from the overall figure for current assets, leading to a low figure for the numerator and, therefore, low acid-test ratio figures.

The formula to calculate quick ratios is as follows: 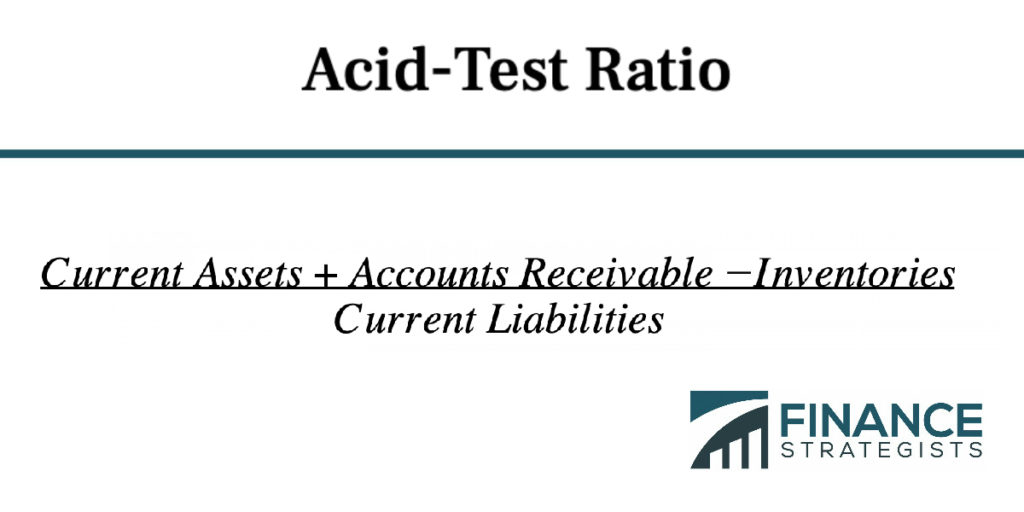 Current assets on a company’s balance sheet are cash and cash equivalents.

They may include savings account holdings, term deposits with a maturity of fewer than three months and treasury bills.

They also include marketable securities, such as liquid financial instruments that can be converted into cash in less than a year.

Inventory figures and other expenses, such as prepaid expenses incurred due to discounts offered on final products, are generally deducted from current assets.

As an example, suppose that company ABC has $100,000 in current assets, $50,000 of inventories and prepaid expenses of $10,000 owing to a discount offered to customers on one of its products.

ABC’s quick ratio can be calculated as follows:

A figure of 0.26 means that ABC does not have sufficient assets to liquidate, if its creditors come calling.

Thus, ABC does not have sufficient cash on hand to meet its liabilities.

Quick ratios can be an effective tool to calculate a company’s ability to fulfill its short-term liabilities.

But it is important to remember that they are useful only within a certain context, for quick analysis, and do not represent the actual situation for debt obligations related to a firm.

A cash flow budget is a more accurate tool to assess the company’s debt commitments.

While figures of one or more are considered healthy for quick ratios, they also vary based on sectors.

As discussed earlier, acid-test ratios for the retail industry tend to be lower than average mainly because the industry tends to hold more inventory as compared to others.

Even within the retail industry, the level of inventory holdings can vary based on the retailer size.

For example, Walmart, Target, and Costco are big retailers who can negotiate favorable supplier terms that do not require them to pay their vendors immediately or based on norms in the industry.

Therefore, inventory figures on their balance sheet may be high and their quick ratios are lower than average.

Compare this situation with that for small retailers who must turn over inventory as quickly as possible to generate cash flow to run their business.

Such retailers will have acid-test ratios approaching or equal to one.

Companies can take steps to improve their quick ratios by either reducing their liabilities or boosting their asset count.

For example, they can move inventory to lessen its impact on the overall ratio.

Another strategy is to invoice pending orders and inventory so that they become accounts receivables in accounting books and can be added to current assets.

Along the same lines, purchases for the business that might have added to the liabilities and account payable figures can be delayed to the next quarter or financial year to boost quick ratios.

The acod test ratio is calculated as a sum of all assets minus inventories divided by current liabilities.
Acid-test ratio, also known as quick ratio, is a quantitative measure of a firm’s capability to meet short-term liabilities by liquidating its assets.
Generally, a score of one or greater for the ratio is considered good because it implies that the firm can fulfill its debt commitments in the short-term.
Companies can take steps to improve their quick ratios by either reducing their liabilities or boosting their asset count.
W2RhdGEtdG9vbHNldC1ibG9ja3Mtc29jaWFsLXNoYXJlPSI0OGFjMWU3MjNkYjVmMTcyYzVmOThlZTgxZDRhODQ5MyJdIHsgdGV4dC1hbGlnbjogbGVmdDsgfSBbZGF0YS10b29sc2V0LWJsb2Nrcy1zb2NpYWwtc2hhcmU9IjQ4YWMxZTcyM2RiNWYxNzJjNWY5OGVlODFkNGE4NDkzIl0gLlNvY2lhbE1lZGlhU2hhcmVCdXR0b24geyB3aWR0aDogMzJweDtoZWlnaHQ6IDMycHg7IH0g